The Mysterious Bone Crypt of Rothwell

When one thinks of churches, there are a lot of images that may spring to mind. Altars, sweeping rows of seats, perhaps you might conjure up thoughts of magnificent murals, statues, or stained glass windows intricately etched with religious imagery. What might not immediately spring to mind are mysterious subterranean crypts filled with unexplained skeletal remains like a scene out of a horror movie. Yet in the quiet town of Rothwell, England, there is such a place; a medieval church under which a macabre scene of thousands of  ancient bones lies hidden in the darkness deep underground that has become one of Britain’s most enduring unsolved mysteries.

Rothwell is a town of around 7,500 that stands on a ridge in the Kettering district of Northamptonshire, England, overlooking the rolling hills of the Ise Valley. It is a town steeped in history, tracing its roots back 2,000 years to the original Romano-British settlers of the area. Over the centuries, the settlement would be invaded during the Dark Age and be rechristened “Rodewell,” meaning “Place of the Red Wall.” During the Middle Ages, the town was an important center of commerce and during the 18th century it was famous for its production of textiles such as woven cloth, silks, and worsted cloth.

With such a rich history, there are many ruins and areas of historical importance to be found here, but perhaps the one that is most well-known is the Holy Trinity Church, which at 173 feet long makes it the longest in the country. Most of the church in its present state dates from the 13th century, but parts of the structure such as the west tower and the unique rounded windows date from the 12th century. In 1950, it was placed on the United Kingdom’s Statutory List of Buildings of Special Architectural or Historic Interest. Besides being known as England’s longest church, the Holy Trinity Church is also known for its mysterious 700 year old bone filled subterranean crypt that lies deep under the building.

The crypt is what is called a charnel chapel, also called charnel houses, bone houses, ossuaries or carnaria, which are semi-subterranean vaults or chambers once used for collecting, curating, and housing disinterred bones from surrounding graveyards as well as for other funerary purposes. Such crypts were typically built under sanctified buildings such as churches and could be accessed from hidden entrances usually located outside of the church itself. During the 13th century, such charnel houses were quite common in many European countries, and it is thought that at one time hundreds of such places dotted the English countryside. However, over the centuries the number of charnel chapels declined due to the repurposing, destruction and active eradication of such structures during the Reformation because of their connection to pre-Reformation Catholic theology. Because of the Reformation, most charnel houses gradually disappeared or their locations lost or forgotten. In modern days it is thought that the Holy Trinity Church houses one of only two intact bone crypts thought to still exist in England.

For centuries, Rothwell’s bone crypt remained hidden and forgotten, a relic of a long gone era lost to the mists of time. Nobody even knew that such a grim chamber was there, not even the clergy at the church. The bones may have very well remained ensconced in their eternal night forever if were not for a complete accident. In the 1700s, Rothwell’s charnel chapel was rediscovered when a bumbling grave digger fell through a degraded portion of the church's floor and reportedly plummeted 12 feet down into the darkness, where a pile of human bones awaited him. Legend has it that the man was so unsettled by the experience of finding himself suddenly mired in a miasma of bones and skulls at the bottom of this dark pit that he went completely stark raving insane and never recovered. It was after this unfortunate event that the crypt's significance was understood and people went in to look at this chamber of bones that had remained hidden and forgotten in the murky depths below the church for centuries.

The crypt is piled with the bones of over 1,500 individuals, which are the result of at least two different internments, one in the 1200s and another in the 1500s. The bones were haphazardly scattered and jumbled around the chamber when first found but have since been separated and organized onto shelves, where they are piled 6 feet high in some places. Rothwell’s bone crypt presents a few mysteries that no one has really been able to completely or satisfactorily solve. Besides the sheer number of remains on display, bizarrely the only types of bones that are present are thigh bones and skulls. Additionally, although there are the remains of 1,500 people here, there are only 800 skulls. Studies of the bones have also found that 90 percent of the remains belonged to men and again it is a mystery as to why. Perhaps the biggest mystery is that no one really knows for sure exactly where all of these bones came from or why they were just dumped unceremoniously down in this underground vault.

For hundreds of years people have been puzzled by this place, and this sinister vault of bones has brewed legends, myths, and rumors. Since the bone crypt’s rediscovery, people have scrambled to try and come up with answers. One theory is that the crypt was simply sort of a dumping ground for victims of the plague, but this would not account for the presence of bones from a completely different time frame or for the overwhelming majority of bones from men. The time difference could be explained by the gradual internment of bones from the nearby graveyard when it became too full, and it is also thought that some of the bones were moved there when a hospital was built on a nearby burial ground in 1580. However, even so, plague victims were typically given the same burial rights as everyone else and it is unlikely they would have been just dumped and forgotten.  Another theory is that many of the bones are the remains of soldiers who died in a battle. Indeed there was a large battle called the Battle of Naseby that raged nearby in 1645. Marks on the bones themselves seem to be scars from battle, though some scientists have argued that these were made after death. Yet another theory was recently  proposed by researchers from the University of Sheffield, who maintain that the vault was used as a place of pilgrimage for villagers to pray among the bones of their ancestors. 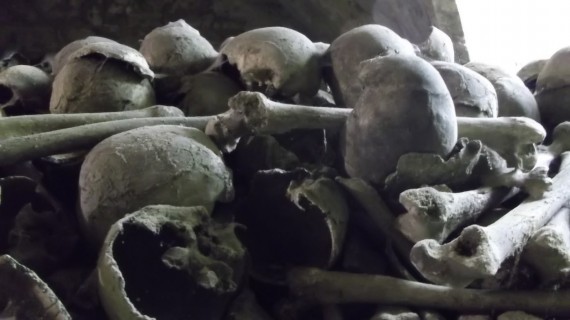 We are also left with the perplexing question of why there are only mostly skulls and leg bones kept here. There are are over 200 bones in the human body, so where did the others go? Indeed, where did all the missing skulls go? No one knows. Researchers have said that the crypt did once hold complete skeletons as well, yet it seems unclear as to where the bones could have gone. There is also the possibility that the leg bones and skulls could have had some religious significance and therefore were the only ones to be buried in the crypt, yet even if that is the case, why are so many skulls missing? Again, It is a conundrum that no one has managed to really figure out.

What happened here? Why are these bones here and where did they come from? Scientists plan to further study the bones and look for answers, but for now the bone crypt of Rothwell remains just about as mysterious as it was 300 years ago. In modern times, the crypt still holds all of its ghastly skeletal remains and is open to public tours. Anyone with the will and the courage to enter a dark, medieval underground tomb full of piled bones can go and see it for themselves. Apparently it is not uncommon for tour groups to gasp in shock at the site of so many of these ancient skulls and bones stacked against the walls of the dank space. It is certainly not your average church. If you have enough nerve and an adequate amount of morbid curiosity, you too can gaze upon the myriad skulls and contemplate what those long gone eyes saw all those years ago.