The Mysterious Ghost Ship of the Arctic

The seas of the world have always been full of mystery, wonder, and often just plain weirdness. One of the more bizarre phenomena of the high seas is the occurrence of various ghost ships throughout history, vessels that are adrift at sea, wandering about without any discernable living crew. Spooky stories of ghost ships have pervaded the lore of the sea for centuries, and they have become a fixture of any discussion on truly weird goings on upon the ocean. 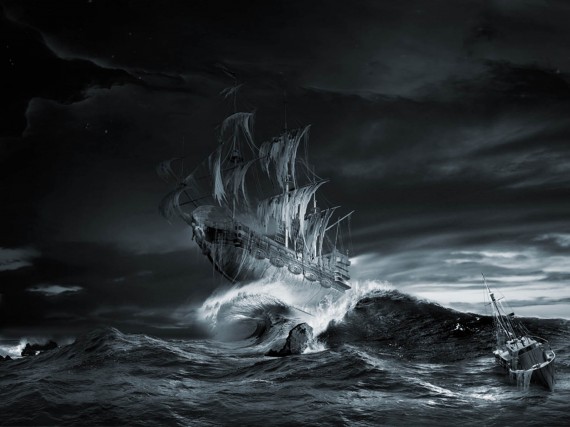 Ghost ships typically fall into two categories, those that are purportedly phantom ships powered by unknown supernatural forces or piloted by ghost crews, and those that are derelicts with crews that have vanished, often under mysterious and unexplainable circumstances. Usually it is fairly easy to discern the two, yet there are cases where it cannot be readily determined if we are looking at a simple derelict or something more supernatural, and indeed more sinister in nature. One of the more bizarre ghost ship cases on record must surely be that of the SS Baychimo, which has actually transcended the designation as a mere ghost ship and gone on to become one of the greatest and most enduring modern day maritime mysteries.

The SS Baychimo was a steel-hulled 1,322 ton, steam-powered vessel that started its life in Sweden when it was constructed in 1914. Its career as an ocean going cargo ship started under the name Ångermanelfven for a German shipping company, where it spent some time as a trading vessel operating between Hamburg and Sweden until World War I began. In the aftermath of the war, the ship was transferred to Britain as war reparations for losses the Germans had cost British shipping, and it was rechristened the Baychimo. The Baychimo was acquired by The Hudson’s Bay Company and was based in Scotland, from where it was sent across the Atlantic to the north coast of Canada and carrying cargo such as furs and pelts between trading posts across the frigid, icy waters of the Arctic. The ship was mostly used to trade provisions for fur with Inuit settlements, but it also made voyages to Alaska and British Columbia carrying various cargo and passengers.

The Baychimo and its crew performed their duties well, braving rough, frigid seas, foul weather, and perilous ice floes to perform a total of nine successful journeys to and from Alaska and British Columbia across less than calm waters. On October 1, 1931, the ship’s luck would run out. The Baychimo was on a routine transport run to Vancouver with a cargo of valuable furs, however, the crew had not accounted for the fact that winter had come earlier than usual that year. The ship and its crew were tossed about by icy blasts of wind and gripped by freezing temperatures, yet they pressed on, determined to deliver their precious cargo. Even as they pushed on through the ominous weather and menacingly choppy seas, a sudden blizzard descended upon the ship and brought with it chunks of pack ice that began to surround the Baychimo and its terrified crew. The ship became trapped by the circling ice floes, which closed in around it and gripped it in a cage of ice as the helpless crew looked on.

Unable to continue their voyage, and facing a possible sinking ship, the captain ordered the crew to abandon the ship and make their way to the town of Barrow on foot, which was about a mile of treacherous, shifting ice floes away. They were able to make it to their destination and took shelter in Barrow for two days before returning to check on the status of their abandoned ship. When they arrived, they were surprised to find that the vessel had broken free of the ice in their absence and was aimlessly drifting about the area. The crew decided to wait until they could retrieve the ship, and built a camp out on the ice nearby where they could keep an eye on it. Unfortunately for the Baychimo’s crew, the foul weather did not let up, and on October 8, the ship was mired in ice once again. This time, the ice was more reluctant to let go, and the ship remained ensconced within its cold prison with no sign of being freed anytime soon.

On October 15, with the blizzard continuing to pound their camp, The Hudson Bay Company took action and sent a recue party to evacuate the crew from their imperiled camp by aircraft. Although 22 of the crew were rescued, the captain and 14 crew members refused to abandon their ship and its cargo, and opted to remain camped out on the ice despite the punishing storm. Receiving provisions from the company, they were prepared to stubbornly wait out the entire winter if that was what it took.

On November 24, a particularly vicious blizzard swept in and visibility in the swirling clouds of snow became nonexistent. The crew that had remained behind lost sight of the ship and when the storm lifted the following day, the Baychimo was nowhere to be seen. The vessel had simply vanished. Considering the severity of the storm that had hit them and the fact that there was no trace of the Baychimo in the vicinity, the captain and crew assumed that the ship had broken apart and sunk into the dark, frigid depths. The dejected crew decided to pack up their camp and head back to civilization.

Imagine the crew’s surprise when a week later, a native Inuit seal hunter scoffed at the idea that the ship had sunk and told them that he had just seen it floating around a few days prior, not 45 miles from where it had been trapped in the ice. The crew excitedly packed up their gear again and headed out to see if they could retrieve their lost ship. Luck was on their side, and they managed to track down the Baychimo exactly where the hunter had said it would be and they eagerly boarded. After an examination of the Baychimo’s condition, the captain decided that it had been too badly damaged by its ordeal in the ice, and was unlikely to remain seaworthy through the winter. It was surmised that the vessel would soon break apart and sink, so the crew frantically salvaged some of the more valuable furs they had been transporting and had them airlifted by The Hudson Bay Company, after which the ship was abandoned and left to its inevitable fate.

The Baychimo was obviously tougher than its captain had given it credit for, because it did indeed survive the winter, and began its ascent into the annals of sea legend. People began to report seeing the ship cruising about the cold north Atlantic waters, totally intact and seemingly unmanned. The first such sighting came when a dog sledder heading for Nome, Alaska, spotted the ship adrift near shore, and the number of sightings took off from there. The path of the Baychimo was unpredictable and erratic, with the ship sometimes being seen near shore but at other times far out to sea, and it was sighted alternately in both open water and trapped within ice, in wildly disparate locations.

In addition to the sightings, there were those who tried to approach the ship only for it to seem to elude pursuit uncannily well for a vessel without a crew. On occasion, the Baychimo was reported to simply vanish from view before it could be reached. Those that did actually manage to catch up with the elusive ship had little success in their endeavors to actually board it. Every attempt to board the derelict vessel was thwarted in some way, and every crew that tried were forced to let it go for one reason or another. Sometimes, the pursuers were simply not equipped to handle the task of salvaging the massive vessel, but other times failure came under more mysterious circumstances. It was reported that it was common for sudden and violent storms to move in without warning upon any move to board the ship, and it is said that quite a few people lost their lives trying. One group of Inuit that once boarded the ghost ship in 1933 for shelter as it was caught in ice ended up being trapped within its walls for 10 days as a sudden, fierce storm raged outside. Other times when people managed to get on board, ice floes would appear out of the surrounding waters like sharks drawn to a whale carcass, and made any hope of salvage impossible. In addition, towlines connected to the Baychimo often snapped either due to rough seas, jagged ice, or even at times for no apparent reason at all, and all of this gave the distinct and eerie impression that the wayward Baychimo did not want to be boarded.

Due to the difficulties that all who tried had in their efforts to board or salvage the ship, the Baychimo over the years accrued a reputation as being a cursed vessel, a bad omen, and by 1939 there were many ships that would flee rather than approach upon sighting it. In 1939, after another failed attempt to board it, the Baychimo disappeared into the cold expanse of the Arctic for the next 23 years. It was thought that the ship had finally run out of whatever power had kept it going all those years and finally sunk, but in March, 1962, a group of Inuits saw it drifting along near the coastline of the Beaufort Sea. The ship had returned from wherever it had gone. The mysterious ship was subsequently sighted several more times up to 1969, when it was seen stuck in a pack of ice, as it was wont to do. It would be the last time anyone would see the ship. When a salvage party came to investigate the 1969 report of the Baychimo in ice, it had vanished by the time anyone arrived. No one has seen it since.

After this 1969 account, it was widely believed that this time, the sea had finally conquered the vessel and that it had sunk, but no trace of wreckage was ever found despite a few searches for it in the area where it was last seen. In 2006, there was resurgence in interest in the mysterious fate of the Baychimo, and the government of Alaska announced its intentions to locate the vessel. So far, they have found nothing, not even so much as a scrap. It is as if the ship has just vanished without a trace from the face of the earth.

The fate of the Baychimo and her cargo, which is still in her hold untouched, remain unknown. What happened to this ship? Did the sea finally claim it? Was it salvaged without anyone knowing about it? Or is it still out there cutting through the Arctic waters of the far north, perhaps with some unfathomable intent of its own? Until it emerges from hiding to be sighted again, or someone finds the wreckage, the ultimate fate of this ghost ship of the Arctic will remain beyond our grasp.

High-Tech Weapons of the Ancients