The Suicide Forest and Overtoun Bridge: What Makes Them So Deadly?

Suicide and depression have been at the forefront of our minds of late.  What with the tragic loss of beloved comedian and actor Robin Williams in early August.  Fans the world over mourn not only for the loss, but also for the pain and suffering he went through leading up to his eventual decision to end his life.

Whatever specific events pushed Robin Williams to suicide – and they were no doubt complex – the underlying reason was a lifetime battling chronic depression.  A terrible, ruthless, and largely invisible disease roughly 350 million people struggle through worldwide.  Recently the World Health Organization (WHO) released the results of a global study on suicide and suicide prevention.  According to their report, suicide rates across the world approach and exceed 800,000 deaths per year.  That equates to someone, somewhere committing suicide once every 40 seconds.[1]

Those statistics are both alarming and heartbreaking, though preventing further deaths due to suicide is a difficult and complex endeavour.  Alongside advocating crisis services and suicide hotlines, as well as better mental health practises, the WHO report pleads for authorities in the worst hit countries – which tend to be poor-to-middle income countries – to begin reducing access to common means of suicide.  Though, governments can only restrict certain things, and only to a certain extent.  If a person is bent on ending their own life, there is nothing; no therapy, no regulations, and no law that will stop them.

This gruesome subject does have a somewhat strange side to it though; some places around the world seem to see more than their fair share of these tragic ends to painful lives.  Now, the statistics above don’t really bear out the fact that places like Japan’s Aokigahara forest, which is known as The Sea of Trees, or more poignantly, The Suicide Forest, are world famous for their connection to such tragic deaths, but the facts are clear.

In the case of The Suicide Forest, the facts are that roughly 100 suicides occur in that forest every year.  Aokigahara is an arboreal forest of approximately 35-square kilometers (14 sq, miles) at the northwest base of Japan’s famous Mount Fuji. The density of the forest acts as a near-total wind-block.  This coupled with the fact there is almost no wildlife in the area makes the forest eerily quiet, which of course, makes it popular with hikers and wilderness enthusiast.  Unfortunately, peace and quiet isn’t the only thing tourists are likely to find there.

There are all kinds of speculative reasons for why the disconsolate and depressed choose this particular location to leave their suffering behind.  Whispers of ancient demons and Yūrei (analogous to the western notion of ghosts) abound, and some blame a cultural meme, so to speak, generated by a 1960 novel Kuroi Jukai by Seichō Matsumoto, which centered on Aokigahara as the location for a series of mysterious murders.  (Jukai means Sea of Trees, and is another name for the forest.)  The phenomenon of suicides in the forest long predates this book, however.

Local government has taken to posting both Japanese and English language warning signs and heartfelt requests for the depressed people who find themselves there, to seek assistance rather than end their lives.  There is also an annual body search that takes places to comb the forest for that year’s victims.

There are other places around the world that are relatively famous for their apparent connection to suicides, though not all pertain to human suffering.

Overtoun House is a beautiful 19-century country estate in Dunbartonshire, Scotland.  It sits on a hillside overlooking the River Clyde, and offers picturesque gardens and walking paths.  It also offers one of the most mysterious bridges in all of Britain, perhaps even the world.  Overtoun Bridge, as it’s known, is an arched stone bridge along an approach road to the Overtoun burn.  The surface of the bridge stands 15 meters (50 feet) above a shallow waterfall, and for some as yet unknown reason, an estimated 600 dogs have leapt to their death over the edge of that bridge.  The apparently suicidal dogs are said to have taken the plunge from Overtoun Bridge at the rate of one per month, since about 1970 (though possibly before this date too).

Nearly all of the dogs who’ve jumped have died upon impact with the ground below, though some have survived the fall, only to again attempt the jump upon reaching the bridge platform when rescued, or upon return visits on later dates.

You may be asking yourself, why exactly a dog would wish to seemingly commit suicide.  After all, the saying “it’s a dog’s life” is meant to highlight the fact that domesticated dogs usually have a pretty easy life, so what could they be depressed about?  Let’s not forget that depression isn’t a choice, and doesn’t depend on miserable life circumstances to strike someone down, but the nature of the disease notwithstanding, canine existentialism hasn’t been explored academically to anyone’s satisfaction.

Other explanations have been suggested though.  Early investigators considered everything from strange isolated wind gusts, to electromagnetic energy creating confusion in the dog’s brain, to an ultrasonic sound originating from a nearby nuclear power facility, to a scent or sight perceived only by the dog, luring them to their deaths.

Dr. David Sands, an animal psychologist with the Scottish SPCA investigated the area and inconclusively concluded that it must have been something the dogs heard or smelled that compelled them to act, though he was unable to identify what that thing might be.  Later, animal habitat expert David Sexton, explored the grounds around the base of the bridge and finally discovered that the area was, and continues to be, a nesting place for a large number of mice and mink.  Sexton theorises that the smell of male mink urine wafting to the bridge platform is causing a sensory overload in certain dogs, which compels them to seek the source of the odour without, obviously, a thought to their own safety. 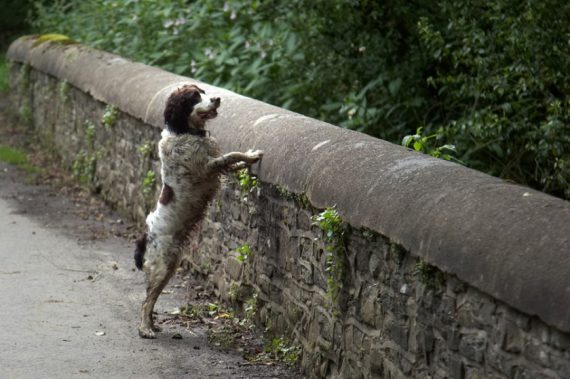 As yet, no one has provided a conclusive explanation, and though the idea that these dogs are experiencing some instinctual predatory reaction triggered by the scent of another animal is compelling, for many people it seems difficult to believe that an otherwise intelligent animal would fail to see the risk in jumping off the side of a bridge 15 meters above a small river.

However you choose to look at these mysteries, the only aspect of the phenomenon that’s truly clear, is that both people and beloved canines are dying, and those deaths are somehow connected to these locations by more than just mere happenstance.

[1] Via Reuters & DailyMail Online.  The suicide map of the world: Korea, Russia and India see the most citizens kill themselves - while America is 'average' http://www.dailymail.co.uk/news/article-2743457/WHO-calls-action-reduce-global-suicide-rate-800-000-year.html#ixzz3CfA5hc2A

The Colony: Reviewed (and Spoilers!)