Think You Know Everything About Water? Well, You Don’t

Who says the days of intelligent discourse within the body politic are over?  What Mr. Rumsfeld was so eloquently espousing is a small part of what’s commonly known as epistemology, or the theory of knowledge.  Epistemology is a branch of philosophy concerned with knowledge; what is knowledge, how is it acquired, and what value does it have in the course of life.  These are some of the questions posed by philosophers, and while those questions may seem simple on the surface, they are anything but simple once you start to dig deeper.

While it’s a fun exercise to ponder what those unknown unknowns might be, in truth, it serves little purpose.  In all the libraries, and in all the books, all the blogs and websites, and all the classrooms the world over, the sum total of human knowledge waits to be discovered.  Or rediscovered as the case may be.

What follows are some relatively simple concepts that, up until now, may have actually been unknown unknowns for you.

Have you ever wondered why warm water freezes faster than cold water?  Perhaps you’ve never noticed this odd fact, but you can test it out for yourself, if you wish.  Up until November of 2013, no one really had any idea why this should be the case.  It’s entirely counterintuitive to physics as we know it.  Though some would say physics is counterintuitive to physics as we know it.

It turns out this problem was recently solved, or at least a plausible explanation has been put forward, though there is disagreement.  And it has to do with the reason why water, unlike any other liquid, expands when frozen; hydrogen bonds.

You don’t need to be a master’s student in chemistry to understand this either.  What happens when water freezes is that during the phase shift (changing from liquid state to solid state) the hydrogen atoms – you’ll remember that water consists of two hydrogen atoms and one oxygen atom – arrange themselves, with respect to the oxygen, into what’s called an open structure.  This means that the hydrogen bonds are forced to stretch in order to maintain their covalent bond with the oxygen atom, and longer hydrogen bonds means more space within the water molecule.  Hence water expands when frozen.  This effect is also what causes ice to float; it’s less dense than than its liquid state. 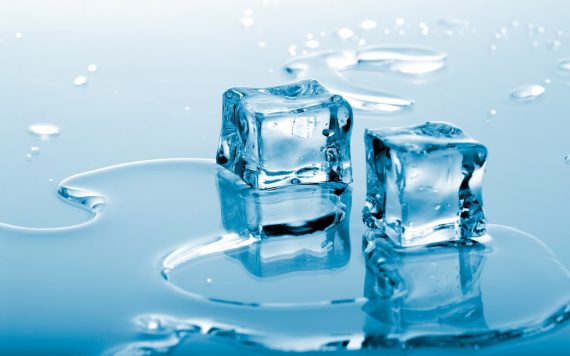 Researchers at Singapore’s Nanyang Technological University worked out that this hydrogen bond stretching is also responsible for warm water freezing faster than cold.[1]  Any high school chemistry student can tell you that hydrogen is attracted to oxygen.  That’s why we have water to begin with.  But the hydrogen atoms in a single water molecule aren't exactly monogamous.  They’re also attracted to the oxygen in other water molecules.  Though, water molecules on the whole are repellant to each other.

What these researchers found is that when water is heated, the repellant force between the water molecules increases, thus increasing the distance between them.  The hydrogen atoms don’t let go of their attraction though, and they stretch out even further to maintain a bond with the oxygen in the adjacent water molecules.  Now if you remember your physics, you’ll know that stretching a bond like this means that energy is being stored inside it as it expands (heat energy).  So, when warmer water is cooled rapidly, the repellant force between water molecules will subside, causing them to move closer together, and in turn causing the hydrogen bonds to shrink, which equals a release of that stored energy.  And releasing energy in any system causes cooling.   Which means, in effect, warm water being cooled rapidly, is actually freezing twice as quickly; both from the outside and the inside.

What you thought was plain, boring water holds other mysteries too.  Did you know that you can build a bridge out of water?

Wasserfaden. That’s the name for a phenomenon that has baffled great minds for more than 100 years.  The word is German for water-thread, and the wasserfaden experiment is something to behold.

As you can see from the video, deionized water can spontaneously form a bridge between two beakers when a high voltage current is applied.  One of the beakers gets a positive charge and the other a negative charge, and once the current reaches a certain critical voltage, the water will begin to climb a small thread suspended between the beakers, ultimately forming a water bridge.  That bridge will remain stable even if the beakers are slowly pushed away from each other, up to 25mm, and once the bridge is formed, the thread – depending on its length – can be pushed across the void and into the second beaker, leaving the water alone to support itself in thin air.

It’s a neat trick, but there aren't any clear answers for why it happens.

The leading explanation is that a high tangent electrical field is causing surface polarization on the water, which is a term used in electromagnetic theory, and can be thought of as similar to the water being magnetized.[2]  The concept is fairly well known in chemical engineering, but why it should have this effect remains unclear.

It was previously thought that sodium ions in the water were being attracted to the negative pole of the current, and subsequently their movement across the bridge was causing a high degree of surface tension.  But this has been proven to be incorrect, as the greater the ionization of the water, the less stable the bridge structure becomes.

And so it goes with human knowledge; as we march ahead, forging new paths in science and technology, we’re able to identify new unknowns, and to thereby shrink the massive pool that is that which we do not know we do not know.

All that need be said at this point is, compared to all the works of man and the wisdom held in the universe wide, we really know nothing.