"Quinton Winter, who collates strange and spooky sightings for his Weird Whitstable website, at first thought the image sent to him by a follower showed an unusual sand formation in the shape of a crab," the story read. Carried recently by the UK's Express, the accompanying images claim to show what hardly resembles any sand formation, but rather, a giant monster of the deep.

"He believes he saw the giant lurking close to the shore when he took his son crabbing last summer in the harbour at Whitstable, which is famed for its oysters," wrote journalist Jon Coates. But this sea monster was no serpent, nor any writhing octopoid the likes of some Lovecraftian nightmare.

This creature was purportedly a giant crab, of which there are now photos which supposedly document the monster's presence just off the shores near Kent, England.

Specifically, the creature appeared to be a crab of the variety known as cancer pagurus, and hardly without question, the specimen in the photos is actually no larger than any other variety; having been doctored into the image as is so often the case with images of purported anomalies the world over.

Something about the crab seems less than scary for most of us, at least when compared with other monsters of the ocean depths. The crab, despite its crushing claws, isn't nearly as frightening to us as the thought of a lonely swim and a chance encounter with a massive shark, or the writhing tentacles of the Architeuthis (or Giant Squid, as it's more commonly called) slipping up one's ankles from below.

And yet, crabs may indeed be associated with some of the greatest mysteries of our time (seriously... bear with me here). One notable example is the theory involves missing U.S. aviator Amelia Earhart, whose plane could have crash landed at Garder Island in the first week of July, 1937. A shoe, a small bottle, and a sextant instrument found there suggested that Earhart and her navigator, Fred Noonan, could possibly have lived on the island for a time; but what was their eventual fate? An investigation carried out the following decade came to an intriguing conclusion: that Earhart and Noonan's remains could have been carried off and hidden... by giant crabs.

Granted, when we say "giant", here we're talking about 9-pound coconut crabs, not two-ton freaks with claws and a thirst for blood. The largest known arthropod is the Japanese Spider Crab, an ocean-dwelling species whose leg span can reach up to 12 feet, and a body weight totaling around 45 pounds. Still, the concept of actual giant "monster" crabs, while rare, has remained intriguing, at least to a few of us. 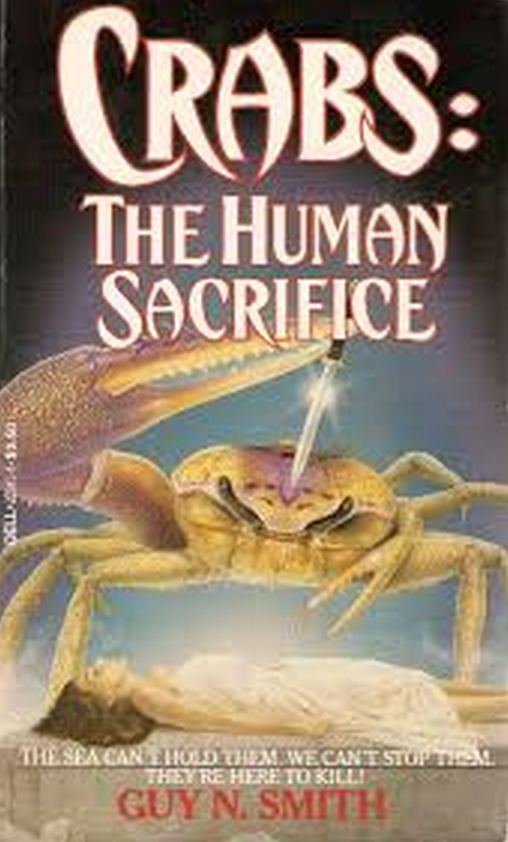 We return again to England, where the events in the following excerpt transpire:

"The Welsh coast basks in summer tranquility. Then the 'drownings' begin. But not until the monstrous crustaceans crawl ashore, their pincers poised for destruction, does the world understand the threat it faces. A seafood cocktail for the strongest stomachs."

If this sounds like the plot of a campy 1980s horror novel, that's because it's referencing a 1989 paperback titled Night of the Crabs. The book was  one of many titles featured in the works of the rather prolific Guy N. Smith, an English writer and enjoyer of fine tobacco (as a side note, Smith apparently still maintains his affinity for tobacco, and hosts a pipe tobacco club presently).

Among his written works, campy horror novels were really his forte, with his masterful storytelling highlighting themes that many would have found too absurd or ridiculous to take seriously. Such was the case with his Night of the Crabs series, which spawned such similar seaweed-ridden titles as Crab Moon, Origin of the Crabs, and my personal favorite, Crabs: The Human Sacrifice (pictured above... and yes, that's a crab holding a knife).

I guess, when we stop to ponder giant, semi-intelligent crabs with a lust for human flesh, and capable of wielding knives, it becomes all too apparent why our crustacean kindred fail to capture the essence of terror in our minds... not that they haven't tried, obviously.

Why We Don’t Have an Ebola Vaccine Yet