Elementary, My Dear Watson! Learning to Think Like Sherlock Holmes

One of the most often-quoted phrases taken from the writings of Sir Arthur Conan Doyle was that of the famous detective, Sherlock Holmes, in his admonishment to Dr. John Watson that appeared in 1890's The Sign of Four. In it, Holmes states that, "when you have eliminated the impossible, whatever remains, however improbable, must be the truth."

The quote has been reissued numerous times, and even attributed wrongly to Spock, famous science officer aboard the starship Enterprise. But let there be no question of its true origin, nor the fundamental philosophy it outlines on observation, logical thought processes, and the science of deduction.

Since an early age, I have, like many before me, remained fascinated with the notion that one might somehow train themselves to be able to think like Sherlock Holmes. Granted, Doyle's most famous creation had one particularly powerful ace up his sleeve to aid in this exemplary mental prowess, and that had been the foresight only a fictional character has in the presence of an omnipotent creator who governs the outcome of his every adventure. Thus, in likelihood, it's not really possible for anyone to apply the same skills of logic in such an impressive way... is it?

True, the standards set by Sherlock Holmes would be hard to match. However, that doesn't mean that applying the same principles the detective used in Doyle's stories might not be effective. In fact, while the adventures of Sherlock Holmes were entirely fictional, his exploits upon the printed page had served as the real-life inspiration for science being applied more broadly to the investigations carried out by police forces, first in England, and then later elsewhere around the world. Hardly any forensics student to have come and gone in the last several decades would not have found some mention of Sherlock Holmes and his science of deduction in their studies.

In her book Mastermind: How to Think Like Sherlock Holmes, author Maria Konnikova notes that, “Holmes’s trick is to treat every thought, every experience and every perception the way he would a pink elephant. In other words, begin with a healthy dose of skepticism instead of the credulity that is your mind’s natural state of being.” Konnikova's treatise on the famous detective is one that primarily employs principles of modern psychology alongside (often slightly tedious) examinations of Doyle's writing, in which we envision Holmes' thought processes through the modern scientific understanding of the human mind. 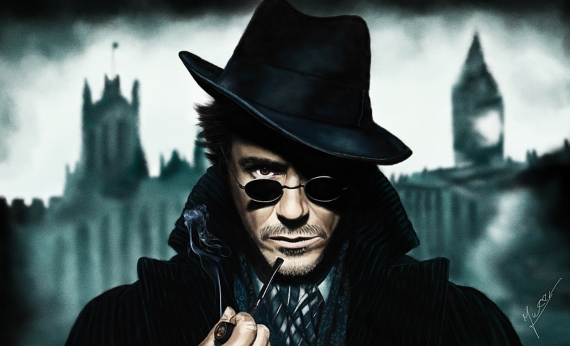 Among the ways that one might harness powers of the mind similar to that of Sherlock Holmes, perhaps key among these is mindfulness; in other words, having an alertness that is conducive to detailed observation of one's environment, fostering an ability to later recall more vividly minute details that may not seem relevant at the outset. Konnikova's book examines throughout its pages the juxtaposition between "Watson" and "Holmes" modes of thought, in which Watson's willful blindness to the minutia of the everyday is contrasted with the mastery of memory and observation that Holmes exhibits time and time again, culminating in the famous "Mind Palace" the detective uses to access facts and details in a way that borders on the extrasensory.

I recently discussed with a few attendees at the 2014 Paradigm Symposium in Minneapolis, Minnesota, the idea of a "Mind Palace," and whether they could offer examples of things they do which help them orchestrate their thoughts more clearly, and retain memories and details better. One attendee, Carol, described her ability to "visualize" memories of places, things, and people she met, as though they were being projected outward just a few inches in front of her eyes. Another, Adam Loyal of Florida, described a unique trick that allows him to seemingly enhance certain memories. "When I see something I want to remember, I literally blink my eyes, as though I'm taking a quick snapshot of what I'm seeing. By doing this, it seems to 'trick' my mind into recalling everything I had seen at the moment before I closed my eyes."

Interestingly, over the course of this discussion with the conference attendees, each who described their methods of enhancing memory described rather sharp differences in the way they recalled and envisioned various past events, suggesting the complexity--and variety--in the ways different people's minds seem to work. Which begs the question: how much of this is "learned" behavior, versus innate functions of the mind that we are each born with? In other words, are there certain psychological processes that can be enhanced or orchestrated as a result of experience, or perhaps even practiced and honed more acutely over time?

If so, it would seem that with practice, memory-enhancing techniques might indeed be utilized to improve one's ability to recall certain past events, and thus make determinations based upon them. Whether or not it could result in a "Mastermind" the likes of Sherlock Holmes is anyone's guess... but it certainly seems like the benefits of such practice would be worthwhile, regardless.