Comet C/2013 A1, also known as Comet Siding Spring, is speeding towards Mars for a very close encounter on Sunday, October 19. It’s predicted to pass within about 87,000 miles (139,500 km) of Mars, which is only half the distance between the Earth and its moon and less than one-tenth the distance of any known comet near-hit of Earth. 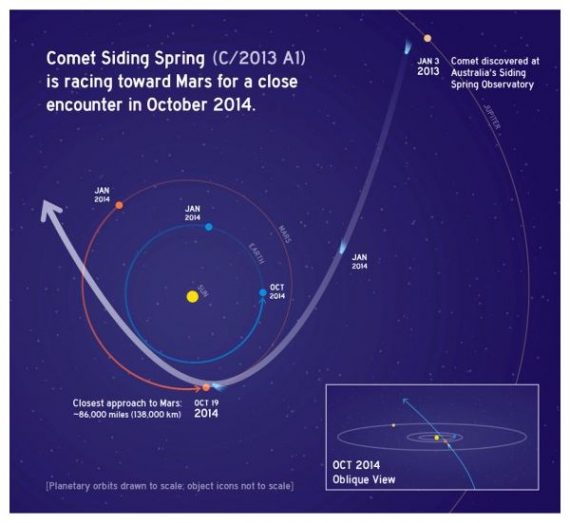 NASA has a lot of equipment on and orbiting Mars, so this is a perfect time to get some great photographs and scientific measurements of the comet. Of special interest will be instruments on the Mars Reconnaissance Orbiter (MRO) which will take advantage of the MRO’s ability to rotate. On the planet’s surface, Mars rovers Opportunity and Curiosity are scheduled to make observations. And don’t forget the Hubble telescope, which will be taking is usual excellent photographs from Earth orbit.

NASA also has to move the MRO to avoid any contact with the debris and ice in the comet’s tail. The MRO has been repositioned so it will be on the opposite side of the planet during the most dangerous time, a period starting about 90 minutes after the comet’s closest encounter and lasting about 20 minutes. Other spacecraft from NASA, the EU and India will also be hiding. The rovers will be protected by Mars’ atmosphere. All equipment will continue to monitor the comet after its flyby.

Named for Australia’s Siding Spring Observatory which discovered it in January 2013, C/2013 A1 is the first comet from the Oort Cloud able to be studied this closely by spacecraft anywhere. It’s less than a mile in diameter and traveling at a speedy 126,000 mph or 56 km per second. This will give scientists a chance to study materials from the formation of our solar system 4.6 billion years ago.

Comet Siding Spring was first thought to be heading for a direct impact with Mars. Fortunately, it will slide by and give us a chance to study it closely as well as speculate on what we might do if a similar comet came that close to Earth.

Siberian Holes May Be Related to the Bermuda Triangle