Are you the adventurous type?  Do you consider backpacking up the side of a mountain to be a fun pastime?  How about kayaking along a raging river with nothing more than some plastic and nylon between you and a close meeting with jagged rocks?  If you’re like me, your answer to the above is a resounding no, but lots of people consider those activities to be the height of recreation. I wonder though, how many of those people would be as enthusiastic about embarking on a voyage across more than three thousand kilometers of open-ocean in a vessel only a bit larger than a canoe.  I’d bet a good number of those intrepid adventure seekers would rather stay home.  I know I would.

There are some people, or, there were some people, who would call us pansies for our reticence.  Those people are the Rapa Nui of the famed Easter Island.  We’ve known for some time that the Rapa Nui were master sailors; their ancestors set out from Southeast Asia, travelling throughout Micronesia and the Polynesian archipelago, expanding their territory well across the Pacific.  They eventually reached what is pretty much the middle of the South Pacific Ocean, settling on the Hawaiian Islands, and of course, Easter Island, around the same time that the Byzantine Empire began to fall, and the unified Kingdom of England rose out of the various Anglo-Saxon kingdoms. 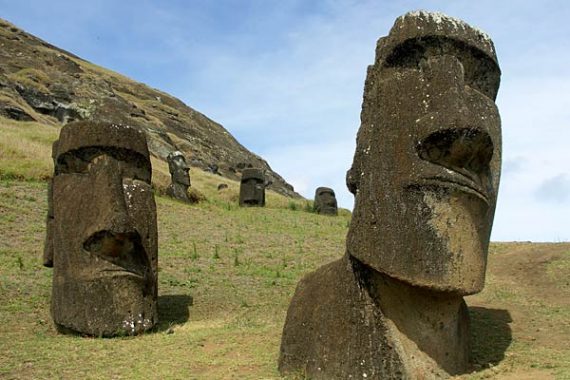 This was also at a time when the great Mesoamerican societies, like the Maya were in turmoil and facing collapse, and the Peruvian/Bolivian cultures, Chimu and Tiahuanaco, were just beginning to flourish along the west coast of South America.

At that time, about 1,000 CE, Easter Island became home to the most adventurous peoples of the Polynesian migration.  They had travelled farther than any of their ancestors – perhaps more than any other people on earth at the time – island hopping and sailing more than 14,000 kilometers.  You would think, after travelling that distance and settling an island paradise like Rapa Nui, they might have traded in their sails and oars for sandy beaches and drinks with little umbrellas in them (they had those, right?), but no, recent research suggests that they didn’t stop there.

Back in 2007, a team of geneticists lead by Erik Thorsby determined that the inhabitants of Easter Island had in their genome, markers indicating a shared ancestry with both Amerindians and Europeans prior to the 1800’s.[1]  These findings were a little controversial at the time.  Much argument and speculation called into question the idea that the Rapa Nui could have had any contact with the Americas prior to European contact on the island in 1722.  After all, there are more than 3,500 kilometers of nothing but water between Easter Island and the coast of Chile.  It was thus believed that any admixture of DNA between the two (or three) cultures must have occurred between the first European contact and the turn of the 19th century.

The same suggestion was made by other means, such as DNA analysis of chicken bones found on the coast of Chile (chickens originated in Asia), and the presence of sweet potatoes, native to the Americas, found on the Cook Islands.  But in each case, dissenting views provided a strong case against pre-colonial contact between Polynesian peoples and the Americas.

It seems, though, that we underestimated the fortitude of Polynesian sailors.

Published Thursday in the journal Current Biology is an unambiguous paper titled Genome-wide Ancestry Patterns in Rapanui Suggest Pre-European Admixture with Native Americans, which serves to confirm those earlier results.[2]  Apparently proving that the Rapa Nui did indeed make the trip between Easter Island and the coast of South America several times prior to the arrival of Jacob Roggeveen and crew on Easter Sunday of 1722.

What may not be immediately apparent, is that the test DNA is from individuals native to Easter Island, meaning that the admixture genes had to have been injected into the society while on Easter Island, not anywhere in South America.  Which in turn means that, not only did the Rapa Nui continue on from Easter Island after their initial settlement to make landfall on the coast of Chile or Peru, but they went back to Easter Island at some point as well, taking natives of South America with them.

This seems a rather stupendous undertaking.  As mentioned, their migration across the Polynesian archipelago, which spanned more than 14,000 kilometers, was punctuated by many small islands between land masses, where they could wait out storms, resupply and make repairs to their boats.  But the span between Easter Island and South America is 3,500 kilometers of open-ocean.  That’s a long trip without a break, and without the advantage of GPS navigation systems, or even compasses.

The Rapa Nui weren’t without their seafaring methods though.

Polynesian Navigation is an entire sailing navigation system used by the ancient Polynesian peoples to traverse great spans of open-water using only their senses and knowledge passed between generations through song.  Like any maritime culture the Polynesians used a keen observation of stars and celestial movements, but they also incorporated the effect of waves, the colour of the sky and the oceans, cloud formations, and even wildlife, specifically bird migration patterns.

Each island culture had its own cabal of highly regarded navigators who were the group’s experts at getting around in the local waters.  These members of the society held great stature and were revered, and were looked to as the community’s saviours in times of famine or natural disaster, because they were able to evacuate the ill or injured and bring in new supplies from elsewhere.

Unlike nautical cultures from other places around the world, the Polynesian navigators didn’t use maps.  At least, they didn’t use maps you would recognise as maps.  They used what’s called a Polynesian Navigation device, or a stick chart (also sometimes called Marshal Island Stick Charts).  That is essentially a flat grid of sticks, usually midribs from palm fronds, assembled to represent various ocean swell characteristics and patterns.  Shells or small rocks were placed throughout to represent islands or land masses, and strings or threads indicated prevailing surface waves and directions.  Stick charts were so complicated and their style varied so widely, that normally only the navigator who had made the chart could accurately decipher it, adding to the navigator’s value in the society.

These recent findings will likely throw a good deal of the accepted wisdom of pre-colonial migration patterns into the air.  Some will balk at the idea, but it’s likely that most will accept what many researchers have held as fact for many years; Polynesian and South American cultures not only had contact with one another, but they had a developmental impact on each other.

However you slice it, we now know that early Rapa Nui were hard core adventurers.