The Everlasting Lightning Storm of Venezuela

There is a place in Venezuela that is home to a bizarre, raging storm that almost never ceases. It is a vast, throbbing beast of a storm that thrums with continual lightning and bellows forth with thunder; an object of singular, electrifying intensity that seems more like an angry living thing than a mere weather phenomenon. In this place, for sometimes up to nearly 300 days a year, the lightning sizzles across the sky and licks at the earth below in a dazzling display of nature at its rawest and most furious. Here, in one, tiny, swampy corner of Venezuela the storm beast makes its lair, and produces the most breathtaking spectacle of a natural light show on earth. 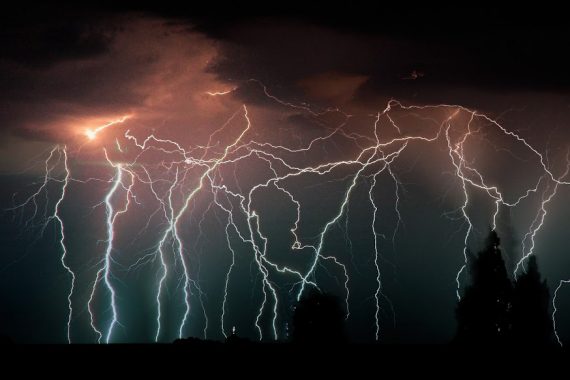 This mesmerizing atmospheric phenomenon is known as Relámpago del Catatumbo, or Catatumbo lightning, and it only occurs in one very defined area of Venezuela, at the mouth of the Catatumbo River where it empties into Lake Maracaibo, in the state of Zulia. Here, the lightning almost never stops and it is startling in its intensity. For between 200 and 300 days a year, the storm produces an average of 28 strikes of lightning per minute for up to 10 hours at a time, sometimes unleashing up to 3,600 bolts of lightning per hour, or roughly one per second during particularly explosive displays, culminating in upwards of 40,000 lightning strikes a night.  The National Weather Service calls 12 strikes per hour "excessive," so yeah, it's a lot of lightning. This immense amount of lightning is the single largest natural source of ozone in the world and is unique on this planet.

This lightning is not only produced in excessively large amounts, but is also remarkably powerful, with each bolt ranging from between 100,000 to 400,000 amps, far beyond the norm. This frighteningly potent lightning is so incredibly bright and constant that it is visible from up to 250 miles away, as a haunting, angry, flickering glow upon the horizon. This long distance visibility has led to the commonly held myth that the Catatumbo lightning is silent, since it can be seen from much farther away than its thunder can be heard. However, it does produce thunder, as all lightning does, in a a cacophony of unfettered, undiluted, raw noise. Nowhere else on Earth does lightning strike in such concentrations and with such relentless ferocity. The storm is also remarkably predictable, occurring in the exact same place every time, and starting practically on cue at around the same time, every time, just about an hour after dusk. 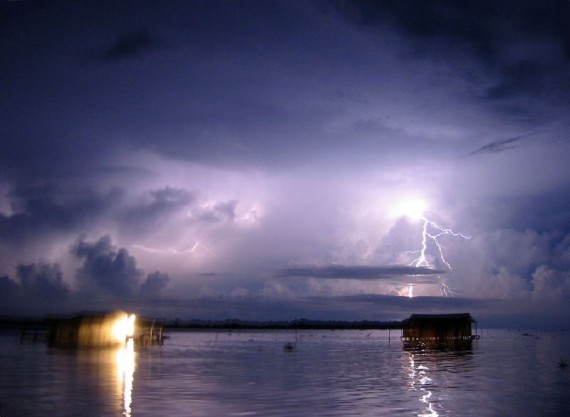 The Catatumbo lightning phenomenon has been well known for centuries. Natives of the region once referred to it as rib a-ba, or the "river of fire," and revered it as a sign from the gods. Later, during the colonial period of the Caribbean, the highly visible light show was used as a means of navigation by sailors, who called it the "Lighthouse of Catatumbo" and the "Maracaibo Beacon." The perpetual lightning storm also had a hand in changing history itself, as it was instrumental in the failure of at least two attempted surprise nighttime invasions of Venezuela. The lightning first betrayed the English Sir Francis Drake in 1595, lighting up the nocturnal invasion fleet and alerting nearby Spanish forces. In 1823, the Catatumbo lightning once again worked to thwart an invasion when it illuminated a Spanish fleet trying to sneak ashore under the cover of darkness during the Venezuelan War of Independence.

In addition to the sheer, staggering intensity of the storm is its continually shifting appearance. Depending on the level of humidity in the air on a particular night, the lightning bolts appear as different colors, and can even phase from one color to another in a single night. When air moisture is high, the minuscule airborne droplets of water act as a prism to scatter light and cause the lightning to become stunning explosions of brilliant red, pink, orange, and purple. When the air is dry, the lightning becomes crackling shocks of stark white in the absence of the prism effect. 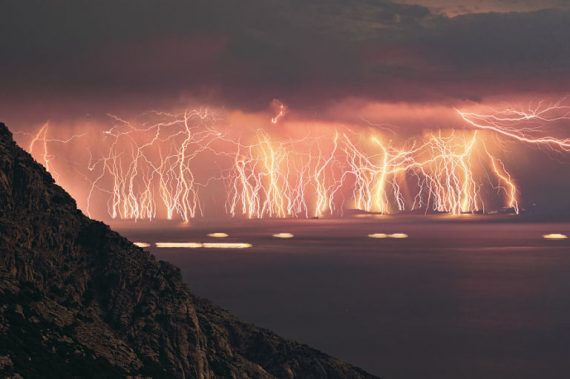 This natural display of spectral beauty has its share of mysteries. For all of its majestic beauty and terrifying power, it has long been unclear as to what actually causes this ongoing storm to become so amped up and only in one small, well defined area. The most common explanation is that a combination of the unique topography and atmospheric conditions of the area, such as wind and heat, cause and feed the terrifying storm. The Lake Maracaibo Basin is surrounded on three sides by the Andes mountains, which form a sort of V that traps warm trade winds from the Caribbean. This hot air meets the cooler air descending from the mountains and the clash causes condensation. This condensation, plus the updrafts created by the additional moisture evaporating from the lake itself, creates the perfect recipe for the formation of thunderstorms.

It is also believed that the unique concentration and intensity of the lightning here can be attributed to the large reserves of methane that lie in the ground beneath the area. The Maracaibo basin sits atop one of the largest oil fields in the world, which produces vast quantities of methane gas. The theory is that this methane may seep into the atmosphere and increase conductivity, giving the thunderstorms and lightning an extra boost. Methane has sometimes been attributed to the myriad colors the lightning takes on as well. While undoubtedly there is a lot of methane to be found here, and it is now understood in particular concentrations under the epicenter of the storm activity, it is unclear how much of an influence, if any, it exerts on the storm. One popular theory in the 1960s was that uranium embedded in the bedrock of the basin might have some effect on the storm. Yet for all of the ideas put forth, at this point, it is not totally understood what causes the storm to rage so consistently and violently. 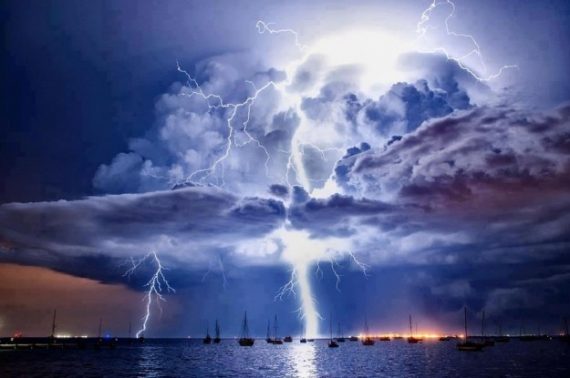 Another mystery to be found in the storm of Catatumdo is its tendency to suddenly stop for long periods. Although the lightning occasionally abates for short times, in 2010, after over a century of consistent, almost daily barrages of lightning, the Catatumbo storm suddenly and inexplicably ceased for over 6 weeks. With completely dark skies lasting from the end of January to the beginning of March, 2010, it was the longest calm in 104 years, so long in fact that scientists and people of the region feared that the rage of the storm had finally been spent. It was speculated that climate change and a drought caused by 2009's powerful El Niño had conspired to snuff the lightning out forever. Then, as suddenly as it had gone quite, the storm once again roared to life to scorch the skies with its crackling lightning. No one is quite sure why the storm suddenly goes through quiet periods such as this, but they occur from time to time without warning. It is feared that ever increasing climate change could one day put an end to this unique and miraculous natural wonder forever.

For now, the Catatumbo lightning storm continues to light up the sky as it always has. It has become such a valued part of the country that Venezuela considers it a gift and a national treasure. The state where the storm occurs, Zulia, even features the lightning on its flag. The country is so proud of its never ending storm that it is actually pursuing plans to register the storm and its area as a UNESCO World Heritage Site, a classification that would be completely new for the organization as it typically only recognizes actual physical places. So far, these plans have not gone through, but the area does have the distinction of holding the Guinness World Record for most lightning strikes per square kilometer per year. 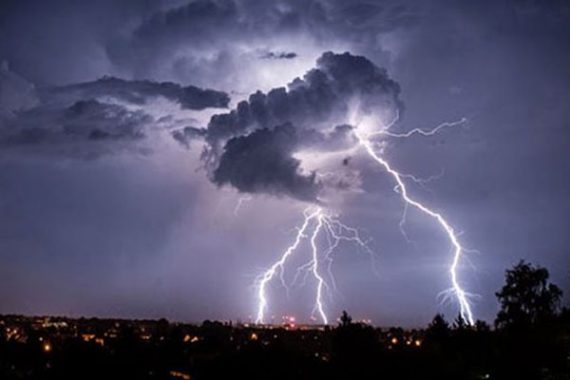 The Maracaibo Lake region and its Catatumbo lightning have become a big draw for tourists and scientists from all over the world, who come to study and experience the awe of this unrivaled natural spectacle. The country has made efforts to develop the area and turn the region into an eco-tourism zone to capitalize on the interest the storm has generated. This has proven to be difficult, as the region is infamous for harboring a myriad of drug dealers and armed guerilla groups, to the extent that the U.S. State Department advises against travel into the area. Nevertheless, looking at the raw power and beauty of this incredible natural phenomenon, one wonders if it may actually be worth it to make the journey. 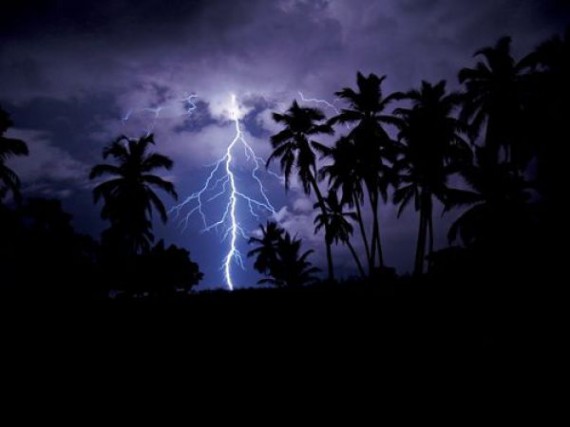 This place is truly a unique, beautiful, and sometimes terrifying example of nature at its most furious. One can only hope that the continual transformation of our climate by humankind does not one day extinguish this unparalleled natural wonder forever.

The Mysterious Ancient Buddhas of Afghanistan