The Mysterious European Mummies of China

The image that many people conjure up when they think of mummies is that of Egypt, with its golden sands, pyramids, and Sphinx. However, the practice of mummification on humans and even animals is a feature of cultures from other areas around the world as well, and dates from even before the ancient Egyptians started doing it. Ancient cultures from Asia, Europe, and South America also performed mummification on corpses, and in fact the oldest known deliberate mummy was found in the Camarones Valley of Chile, and dates to around 5050 BCE, quite awhile before the first known Egyptian mummies appeared.

In addition to mummies that were intentionally created, there are those that were naturally made, usually due to either extremely dry conditions combined with great heat or cold, or anaerobic conditions, which means that a low level of oxygen prevented the decomposition of the corpses. Such naturally created mummies are called spontaneous mummies, and can be found all over the world, on every continent.

In Asia, many such natural mummies have been found in China, with very well preserved corpses being discovered from dynasties throughout Chinese history. While it certainly seems that it is not unusual to comes across mummified corpses in China, it is perhaps odd that some of the mummies unearthed here are not Chinese at all, and in fact are thousands of miles away from anywhere they have any business being. Such is the case of the hundreds of mysterious mummies of European descent that somehow found their final resting place in the sun scorched sands of the remote Taklamakan Desert of Xinjiang, in western China. Here, in the place they call the Tarim Basin, have been found the perfectly preserved remains of people that have been determined to be of European origin, representing groups that had never previously been believed to have made it to China.

One of the better known mummies found in the Taklamakan Desert is an individual known as Cherchen Man, who was determined to be of Celtic origin. He is phenomenally well preserved for being around 3,000 years old, with Nordic features such as high cheekbones and long nose, as well as reddish hair and beard. It is estimated that he stood around 6 feet high, and when found was dressed in a red twill tunic and tartan leggings that have a weave determined to be characteristic of Bronze Age Celts. The mummy was found along with those of three women and a baby, all of which were in an extremely pristine state of mummification, far beyond what is typically seen in the more well-known Egyptian mummies. One of the women found with the Cherchen Man had luxurious light brown hair that was astonishingly lustrous considering its age and immaculately combed and braided. In fact, all of the bodies had been very carefully laid out and dressed. The baby was wrapped in high quality brown cloth tied with red and blue cord. On each of the infants eyes someone had lovingly placed blue stones, and a baby's milk bottle made from sheep's udder had been carefully placed to the side within reach, all of which suggest some sort of ritual before death.

In addition to the clothing and physical features, the Cherchen Man's burial site, along with the burial sites for around 200 others apparently of the same tribe, were also of a European style, featuring Celtic stone structures ringed by standing stone figures. It is a unique and significant find to discover hundreds of Bronze Age Celtic mummies in the Chinese desert. The Celts at the peak of their civilization, in around 300 BC, had their main settlements in France and the British Isles, with influence that extended perhaps as far east as the central plain of Turkey but no further, and certainly not as far as China.

There are other mummies of European extent to be found here in the Tarim Basin as well. A 4,000 year old mummy of a woman was found near the town of Loulan and is known only as the Loulan Beauty. The woman was determined to have been 45 years old when she died, and had European features as well as long, flowing hair that seemed as if it had been combed only yesterday.  The woman had been buried with food for her next life, as well as various combs and a feather. The town of Loulan holds several such similar mummies, such as a Nordic featured child believed to have been around 8 years old at the time of death and who had been lovingly wrapped in beautifully patterned wool cloth. 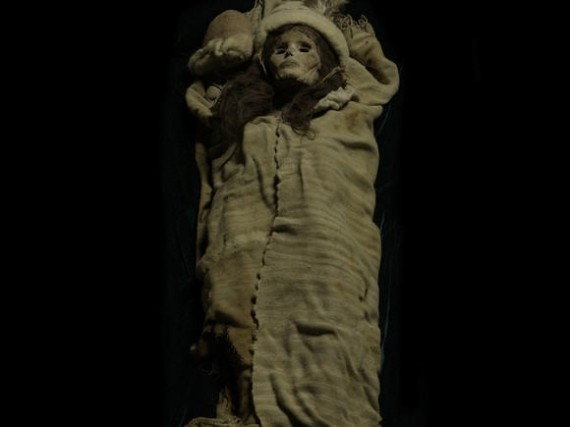 Another Caucasian mummy of China that is considered to be one of the most well preserved of all of them is what is called Yingpan Man, and sometimes referred to as Handsome Man. This mummy is around 2,000 years old and has blond hair and a bearded face. Over his face is a death mask made of hemp covered in gold foil, with a smile and a mustache painted upon it. Such death masks are a tradition of ancient Greece, and other clues found on the mummy point to Greek ancestry, such as the images of fighting Greeks embroidered in gold across red and maroon wool garments. The man was very large for his time, standing at 6 feet, six inches tall. It is a mystery as to how an apparently Greek man managed to come to China long before any of his people would have been present here, and it is unknown what brought him here to this Chinese desert.

The Tarim Basin is ideal for the mummification of corpses due to the extremely dry conditions and the alkaline soil here. In all, there have been around 400 mummies of European descent, all in various states of preservation and from varying time frames, found throughout the Tarim Basin over the past 25 years. Extensive DNA testing on the mummies have shown without a doubt that they are indeed of European ancestry. It remains a mystery as to just how these people got to this far flung desert, how long they inhabited the region, or why. All that is known for sure is that the discovery of these European mummies in China has challenged our previous knowledge of early European and Chinese history, and have been regarded as one of the most important archeological finds of the century. Already there have been many things learned about these Bronze Age people from studying their well preserved remains, such as about the tools they used, the clothes they wore, their burial customs, and even their physical characteristics. Their presence in China also sheds light on exactly how early Europeans diffused across different lands, and has sparked a good amount of debate and theories.

One of the people who has extensively studied the Caucasian mummies of China, Professor Victor Mair of Pennsylvania University, said that he believes that early Europeans long ago spread out in different directions. He believes that some of these peoples traveled west to become the Celts in Britain and Ireland, others went north to become the Germanic tribes, and still others journeyed east to find their way to Xinjiang. These ancient European settlers are believed to represent some of the earliest human inhabitants of the Tarim Basin, and Mair has stated that from around 1800BC the earliest mummies to be found here are exclusively Caucausoid or Europoid rather than Chinese in origin.

The discovery of these mummies has caused not only debate as to their origins, but also a good amount of political uproar in China. The existence of people of European origin inhabiting the region so long ago has led to ethnic separatist movements stirring up trouble. Some such groups even claim to be the descendants of these early European settlers in an effort to sow regional unrest. Others find it distasteful that the discovery of these mummies suggest that Europeans were in the Xinjiang region long before East Asians arrived and thousands of years before the Chinese were believed to have historically made first contact with the West. The potentially explosive controversy surrounding the discoveries has forced the government to keep research into the mummies under tight control.

Who were these ancient Europeans of China? Why did they come here to the Taklamakan Desert? For now, no one knows for sure. One thing seems to be certain though. In the local language of Xinjiang's Uighur people, the word "Taklamakan" means "You come in and never come out." This proved to be ominously true for the European mummies of China.