The Mysterious Sunken Treasure of the Salton Sea

Located in the barren, sun scorched desert of southern California is an enigmatic and somewhat unearthly sight; a lake sprawled out amidst the parched, baked earth, ringed by wind blasted ghost towns and with beaches of crushed fish bones rather than sand. This is the Salton Sea, a shallow, saline lake that lies along the San Andreas fault in the lowest elevations of the Salton Basin in  California's Colorado Desert, at an elevation of 228 feet below sea level, just 5 feet higher than Death Valley. The lake is huge. It covers 362 square miles, is 35 miles by 15 miles in size, with an average depth of 29.9 feet, a maximum depth of 52 feet, and contains approximately 7.3 million acre feet of water that is 30% saltier than the Pacific Ocean.

As impressive a sight as this immense oasis within the desert is, the Salton Sea is not a natural feature of this dry wasteland, and should in fact never have existed. The sea was created by accident between the years of 1905 and 1907, when shoddily built irrigation canals allowed the Colorado river to burst forth into the desert. For two years, the entire flow of the river filled the basin unabated, inundating crops and submerging whole towns. Repair efforts were impeded by financial problems and political infighting as the water surged unchecked into the region. The relentless influx of water was finally staunched when levees were made comprised of boulders dumped within one of the larger breaches. By that time, the sea had covered nearly 400 square miles and was the largest body of water in the entire state of California.

At first it was thought that the sea would eventually evaporate in the parched, desert landscape, just as had happened with other ancient lakes created in the region by flooding of the Colorado River, but the sea remained unchanged. Agricultural runoff from the nearby, prosperous farming areas of Imperial Valley fed the sea, preventing it from drying up and allowing it to maintain its massive size. The newly formed lake was named the Salton Sea.

Over the years, the Salton Sea would see various types of development along its shores. The Navy opened a test base here in the 1940s, which served as a seaplane operations facility during World War II. It was here that planes, including the infamous Enola Gay, dropped dummy bombs in preparation for their fateful Hiroshima run. Another military base called Camp Dunlop was also in operation here during WWII as a desert training center for the army. In the 1950s, The California Department of Fish and Game began efforts to stock the sea with fish. Thousands of fish captured in the Gulf of California were released into the sea and many species thrived in the salty water. As a result, the sea became an important fishery, and fishermen flocked here to build fishing communities. Migratory birds also flocked here and it became a major stop over point for millions of migrating birds.

By the 1960s, developers began to realize the potential of turning this inland sea, with its year round sunny weather and close vicinity to the Los Angeles and San Diego metropolitan areas, into a tourist resort. The nearby resort of Palm Springs was flourishing, so to capitalize on this, luxurious resorts, yacht marinas, housing developments, and golf courses sprang up along the sea, and the area was marketed as "Palm Springs on a beach." During this time, the Salton Sea became a bustling resort town with thousands of visitors every year, and it was a paradise for swimmers, boaters, and fishermen. Thousands of plots for homes were sold, yet as time went on the sea's popularity waned as it was too hot and was starting to be pervaded by the smell of the dead fish that were appearing as a result of increasing salinity levels, as well as of the stink of heat-baked algae that fed on the fertilizers dumped into the lake from the nearby Imperial Valley agricultural region. In addition, with no natural inlets or outlets, the chemical levels from the constant agricultural drainage was making the waters of the sea murkier and murkier, changing the once blue waters into a muddy mess with an overpowering, unpleasant stench.

In 1977, the coup de grace of earnest development of the area came in the form of Tropical Storm Doreen, which raged through the Imperial Valley and caused widespread flooding. Many of the thriving settlements and resort areas that had taken hold along the Salton Sea's shore were badly flooded and in some cases totally submerged. While some communities stuck through it all, many were abandoned and left to rot in the fly infested, smelly muck. The 80s and 90s saw several mass die offs of fish and birds that littered the shores with their rotting carcasses and overwhelmed clean up efforts. In many places, the beaches are comprised of not sand, but the granulated bones of countless fish and birds.

As a result of all of this, although the area has been cleaned up in recent years and is the home of the popular Salton Sea Recreation Area, the sea still has an eerie, haunted quality to it. The shores in some places are littered with rotting dead fish and birds, and many of the abandoned ghost towns of the resorts are still there, as well as the desolate concrete ruins of the military bases from the 1940s, which loom out of the landscape and mud like the skeletons of some prehistoric monster. Along the beaches, mired up to their doorhandles in sludge, are abandoned cars that are covered in muck and often used as perches for the many species of bird that come to rest here. Some of the settlements that still remain are inhabited by misfit survivalists and those wishing to escape from society, with the towns taking on an almost Road Warrior-esque atmosphere. Submerged under water is the lost city of Salton, which was inundated over 100 years ago when the Salton Sea first was created and has turned into an artificial reef of sorts with fish swimming along streets and through buildings where people once lived. The Salton Sea is truly the kind of place that invites mystery, legend, and myth.

The sea has often been likened to a sort of Bermuda Triangle of sorts, a black hole from which planes and boats sometimes never return. This myth was perpetuated during the years when the area was the home of military bases during WWII. It was during this time that more than three dozen men and their planes were lost here, often under inexplicable circumstances. According to Navy records, four Wildcats, two Corsairs, two Hellcats, four patrol planes, two Helldivers and 10 Avengers were all lost here, crashing into the sea often under clear, calm conditions. In many cases, the wreckage of these downed planes has never been found. Boats have also reportedly sunk here for no discernible reason.

One of more enduring legends of strange disappearances in the Salton Sea goes all the way back to before the sea was even formed, when the region was home to an entirely different lake that filled the same basin. In the 16th century, the Salton Basin was flooded very much like it is now, with a huge lake lying exactly where the current Salton Sea is found now. This lake was called Lake Cahuilla. It was an enormous body of water that was the size of the state of Delaware and connected to the Sea of Cortez, which in modern days is known as the Gulf of California. It is here that the story of a lost Spanish Galleon loaded with pearls and gold coins comes in.

During the existence of Lake Cahuilla in the 16th century, it was possible to navigate there through the Sea of Cortez. It is said that English and Dutch pirates prowled the waters off the entrance to the gulf, but that one treasure laden Spanish Galleon managed to slip past them and ended up sailing into the lake.  The story goes that the galleon ran aground on a sandbar or landslide, after which the crew were forced to abandon it and escape overland through the desert, leaving the ship and its cargo of gold and pearls behind. Over time, the lake disappeared and it is said the ship sank beneath the sands.

Over the ensuing centuries, stories have abounded of an ancient ship in the middle of the desert, buried and unburied by the shifting sands. In 1774, a mule driver named Tiburcio Manquerna supposedly stumbled across a large cache of pearls lying amidst the desert sands. He grabbed as many of the pearls as he could carry and walked out of the desert a rich man. Later, when he went back for more, the mule driver could not relocate the exact location and it is said that he spent the rest of his life searching for it.

In 1870, a prospector by the name of Charley Clusker claimed to have come across an ornately carved Spanish Galleon sitting in the desert. The prospector described how the ship was located in boiling springs and alkaline mud.  The excited prospector, figuring that he had hit the mother lode, was not prepared to salvage it at the time and so he went back with plans to come back equipped to get his treasure. When he made the journey back to where he thought he had seen the ship, it was gone. 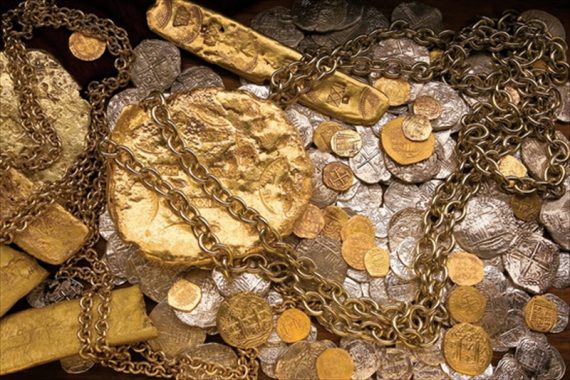 Although it is unclear if this is related to the Spanish Galleon, in 1949, three students of UCLA went out into the desert to follow up on a story they had heard from a Cahuilla Indian of a serpent shaped canoe he had seen in the area in 1917, which the students thought may be a "Viking ship" blown off course. The students were well prepared, with irrigation maps from 1910 and various published accounts from the 1800s, and they departed on their quest from Laguna Salada in Baja California. It is unknown what ultimately became of this expedition or if they ever found what they were looking for.

Over the years there were many such tales of miners and hikers coming across the haunting sight of a Spanish Galleon half buried in the desert, but nothing ever became of it and the ship always seemed to disappear back into the sands from whence it came. When the Salton Sea was created in 1905, it is believed that the galleon was also submerged and lies at the murky bottom, lodged deep in the mud at the bottom of the lake to this day. Several expeditions of divers have descended into the depths of the lake in search of the lost treasure, but they have only managed to find the wreckage of planes that crashed into the sea during its heyday as a spot for military bases. There has been no sign of the legendary Spanish Galleon or its treasure.

Is there an ancient lost treasure buried at the bottom of the Salton sea? Perhaps the answer lies out there, ensconced in the sludgy bottom among the skeletons of warplanes and other boats in their watery graves, perpetually part of the mystery of this bizarre desert sea.

Some Say This Tagalong Asteroid is the Earth’s New Moon