An Alternative History of Mankind

An Alternative History of Mankind is the new book from John Ventre, who also penned UFOs Over Pennsylvania; Apophis 2029; The Day After 2012; and several other titles. And, as John's bio notes: "John is a member of the FBI's InfraGard group [and is] the PA State Director for the Mutual UFO Network." On top of that, John "owns the UFO themed Mexican restaurant trademark, 'Flying Salsa.'"

With that all said, it's time to take a look at John's latest release. A copy was sent to me quite some time ago, but work commitments ensured that I was only able to finally finish reading it last week - and I'm very pleased that I did. An Alternative History of Mankind is not your average UFO book - and that's a very good thing, too.

Not only does John Ventre's book deal with a number of definitively alternative issues, it's also written in alternative fashion - at least, the first part is. By John's own admission, the first 100 pages of his book are fictionalized. Of course, telling what is, effectively, a non-fiction story in a fictionalized setting can be risky and can also end up confusing the readers. Fortunately, the approach John takes works very well.

John has clearly dug very deep into the mysteries of both the infinitely distant past and of recent history. He has also come to some intriguing and notable conclusions along the way. But, to get his message and ideas across, John presents us with a thought-provoking and engaging scenario. 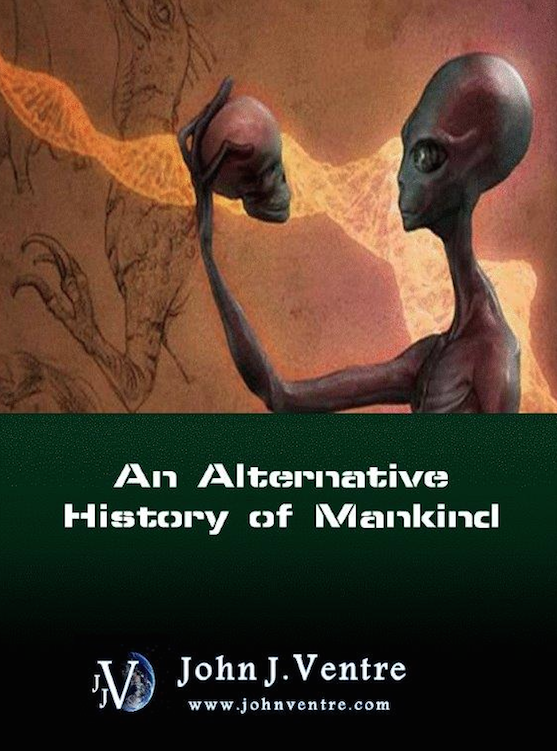 In the novelized part of the book, John is driving out of Roswell, New Mexico, when he sees a strange-looking woman hitchhiking along the road. He decides to pick her up, and that's when things get interesting.

First, there is the woman's appearance: she is an albino with strange, grey eyes. Her name is Sigrun. As the journey progresses, it becomes very clear that Sigrun is not from these parts, to put it mildly. That much becomes acutely apparent when Sigrun begins to relate what she knows of the Earth's history and of a lengthy extraterrestrial manipulation of the human race.

What follows amounts to a discussion between John and Sigrun on a wide and varied body of data on numerous topics. They include: the genetic manipulation of Neanderthal man; attempts by hostile alien races to wipe us out with lethal viruses (something which is linked in the story to the cattle-mutilation issue); the origins of ancient Egypt; the "Face on Mars" controversy; Fatima; and the infamous Battle of Los Angeles.

But things don't end there. In fact, Sigrun has barely begun: the JFK-UFO connection; HAARP; the mystery of the Men in Black and - as we get to the end of the story - eschatology all crop up. Yes, it's an unusual way to get a message, concepts, and thoughts, across - but it works.

In contrast, the roughly remaining two-thirds of the book are written very differently to the opening sections. John provides us with summaries of what he believes to be some of the most credible UFO evidence on record, such as that relating to the aforementioned Battle of Los Angeles, and the famous 1967 missile shut-downs. There's also a list of useful facts about the UFO phenomenon - a list which runs to 168 entries, and which will be particularly useful for newcomers to the subject.

The remaining parts of the book are wide-ranging. They include a history of UFO crash cases; a summary of UFOs caught on film; and quote from famous and powerful people, including various presidents of the United States, astronauts, and high-ranking military personnel.

Particularly intriguing is the section of the book that focuses on John's personal (and sometimes traumatic) encounters with what can only be termed the world of the paranormal. An out of body experience, an encounter with what sounds somewhat like one of the creepy "Shadow People," and childhood prophecies are just parts of it.

Add to that copies of some of John's articles (from MUFON's monthly journal and elsewhere), papers on (a) the alleged Aztec, New Mexico UFO crash of 1948; and (b) the strange life and death of Morris Jessup, and what you get is a wide and infinitely varied body of material to sink your teeth into.

And one last thing: there's an excellent paper on trans-humanism from Mysterious Universe's very own Micah Hanks.