On June 10, 1912, in Villisca, Iowa, six members of the family of Josiah Moore and two people staying with them overnight were bludgeoned to death with an axe. The murders were never solved and many believe the house is haunted by some or all of the victims. On November 7, 2014, the Villisca House nearly claimed another life.

According to the Villisca Axe Murder House website, the house has been preserved and for 20 years has been available for both day and night tours. It can also be rented for a night. Many visitors claim to have heard children’s voices and seen paranormal activities such as falling lamps and flying objects. Psychics allegedly have spoken to spirits there and paranormal investigators have recorded audio, video and photographic evidence of ghosts. One of those investigators may have had the ghosts or the house turn on him.

Robert Laursen, Jr., of Rhinelander, Wisconsin, was conducting a paranormal investigation at the Villisca on November 7. He was alone in a room in the house, which has no electricity or running water, when he began screaming for help. Other investigators found him suffering from multiple self-inflicted stab wounds. Montgomery County police and paramedics determined he was in critical condition and took him to a hospital in Clarinda, which flew him by air ambulance to Creighton Medical Center in Omaha.

Did the house or its paranormal residents have anything to do with Laursen’s stabbing? While there was no evidence of foul play, Montgomery County Sheriff Joe Sampson had this to say:

I don’t believe it’s an accident. Why he did it, we have no idea.

According to the current owner of the house, other than the original axe murders, this is the first incident of this kind to occur there.

Did Laursen incite the wrath of the house or its victims? Did he discover something that might have caused the spirit of the still unknown murderer to try and stop him? Will this increase tourism at the house? Only time will tell. 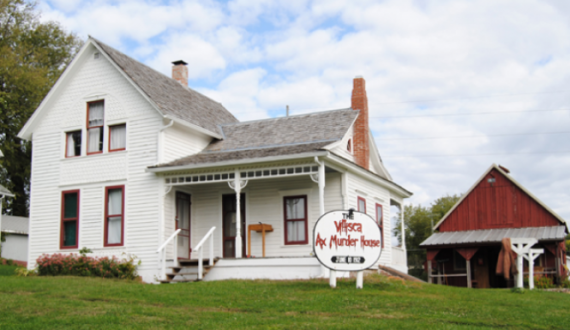