Flashes of Light From Uranus Are No Joke

OK, get all of the “flames shooting out of Uranus” puns out of your system now. Finished? It’s no joke – astronomers have spotted bright lights on the surface of Uranus and no one seems to be able to pinpoint the cause.

The lights were first seen in August by astronomers using the W. M. Keck II Telescope in Hawaii. The eight massive bright spots were the wavelength of storm clouds in the Uranus atmosphere, whose pressure is half of Earth’s. While storm conditions on Uranus are not unusual, these were because they were of the intensity normally seen during the Uranus's once every 42-year equinox, the last of which peaked in 2007 when sunlight was hitting the equator. The astronomers say this activity should have dissipated by now.

In October, amateur astronomers saw another bright spot that appeared to be deeper down in the atmosphere of Uranus. That discovery caused the operators of the Hubble telescope to take a few shots of Uranus and determine it was from multiple storms stretching over 9,000 km (5,760 miles) across. Like the others, this light is caused by methane gas rising into the atmosphere, freezing into crystals and reflecting sunlight. Because Uranus has no thermal energy source, the Sun is also responsible for heating the methane and causing it to rise.

Why the methane is heating now is the subject discussed when these observations were presented at a meeting of the American Astronomical Society's Division of Planetary Sciences held this week in Tucson, Arizona. Larry Sromovsky, a planetary scientist at the University of Wisconsin, had this to say:

If indeed these features are high-altitude clouds generated by flow perturbations associated with a deeper vortex system, such drastic fluctuations in intensity would indeed be possible. These unexpected observations remind us keenly of how little we understand about atmospheric dynamics in outer planet atmospheres.

Is Earth's global warming spreading to Uranus? Whatever the cause, it will be the source of storms and Uranus puns for many more years. 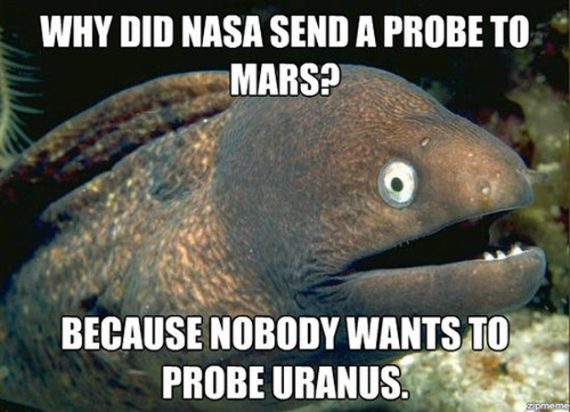