Albert Einstein's concepts about the nature of our universe were almost visionary. Since his revolutionary theories of relativity were presented to the scientific world, many have pondered how such a profound unification of ideas could stem from a single mind. As much as there was a unified concept of the physical universe in Einstein's mind, there were problems he saw, too.

For instance, an emerging field that became known as quantum mechanics had begun to appear by the early 1900s, and within the first two decades of the century, theorists from numerous areas of study that included Werner Heisenberg, Erwin Schrödinger, and Wolfgang Pauli were all making contributions to the study of the quantum world from within their various branches of physics.

Physical phenomena, dealt with at nanoscopic scales where the subtle relationship between energy and frequency fall within what is known as the Planck constant, is the essence of quantum theory. Despite his own contributions to understanding this energetic relationship amidst the vastness of our cosmic minutia, the indefinite locality of particles, as suggested by quantum theory, seemed unlikely to Einstein. "God does not play dice with the universe," he retorted, expressing that even on the quantum level, the fundamental elements that bring materiality together into unity on the macro-scale must remain.

Physicists have long sought to dissect this breakdown in the apparent relationship between Newtonian physics and the "weirdness", to put it frankly, that seems to exist in the quantum world. However, a new theory of parallel worlds seeks to refine the "many universes" hypothesis that has become popular amidst notions of string theory and m-brane theory that have emerged in more recent years.

A concept first introduced years ago by Lubbock-based Bill Poirier, a professor of physics at Texas Tech University. Poirier does believe in a multiverse, of sorts, but not in the same sense that many modern physicists have suggested. Over the last few years, his idea has been gaining some momentum, which includes demonstrable mathematical feasibility by his peers in the field. Following new research that was published in late October in the physics journal Physical Review X, Live Science reports:

In the new study, which builds on Poirier's idea, physicists from Griffith University in Australia and the University of California, Davis, demonstrate that it only takes two interacting parallel worlds — not an infinite number — to produce the weird quantum behavior that physicists have observed. Neighboring worlds repulse one another, the researchers wrote in the paper. This force of repulsion could explain bizarre quantum effects, such as particles that can tunnel through barriers. 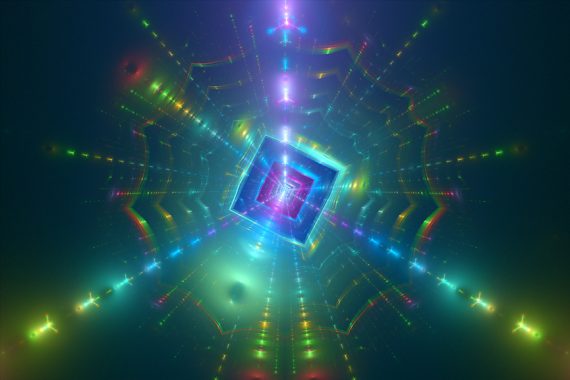 The concept of a multiverse, and perhaps one more closely related to Poirier’s recent research, actually stems back to the 1950s, with the issuance of Hugh Everett’s “Many Worlds” theory. The scientific establishment was generally resistant to the idea at the time, which received little warm attention. However, the idea would see a renaissance in the late 1960s and into the 70s, as theoretical physicist Bryce Seligman DeWitt modified the idea and popularized it, now referring to it as simply “many-worlds” theory. As experimental evidence has mounted over the years that suggests, at very least, the possibility that there may be a multiverse after all, Poirier has become one of many others to seek to refine Everette’s initial offerings, calling his own reworking of the concept the “Many Interacting Worlds”, or MIW theory.

Not only would a workable many worlds theory resolve some of Einstein's quandaries with the quantum world, it could also negate the concern over paradoxes that exist in relation to concepts like time travel, negating such things as the need for the Novikov self-consistency principle, proposed in the 1980s by physicist Igor Dmitriyevich Novikov as a way to explain the unlikely probability of events that could create time paradoxes (but not ruling out entirely the possibility that time travel could, in theory, actually still works in accordance with many interpretations of general relativity).

The sheer fact that so much fanfare can be afforded the discussion of quantum physics as it relates to the possible existence of a multiverse cannot, by itself, justify the theories. Ideas that there may be multiple realities, and even separate dimensions of existence that, some day, might even become accessible to us, captures the imagination in ways that exceed our understanding.

But in the world of science, the nearly emotional need for such things, while inspirational for new modes of thought about how our universe may work, also requires evidence. "So far, Many Interacting Worlds makes the same predictions as standard quantum theory," Poirier says. "All we can say for sure at present is that it might be correct." Might be, in other words, means we're still in the guessing stages... but with time, the educated guesswork employed here may carry us on toward fascinating new realities that could exist just next door.

Another UFO Over a Nuclear Plant, This Time in Arkansas