In a district in East Jakarta, there is a slum by the name of South Cipinang Besar. When walking through its streets, you may get the impression that it is just another squalid slum like any other. Trash and sewerage litter the ground, it seems like everything is caked with grime and decay, and the poor are drawn to you. They shuffle towards you, sometimes displaying horrific handicaps, extending their gnarled hands towards you to beg for any money you can spare. As you work your way through this throng of disheveled, unfortunate souls, you may notice one that stands out from the rest. At first the figure's small stature may make you think that a small child has approached to beg like all of the others.

Then you may notice that something is awry. The one who has approached does not move like a child. Its movements are somewhat odd and jerky. The dimensions of the body are also somewhat off. Then you may notice the tail and the hairy, clawed fingers. You might then realize that what you took at a distance to be a child's face is in fact a plastic, child's mask. As the sudden, shocking realization sets in that this is no ordinary child, others begin to work their way to you from the surrounding squallor like something out of a nightmare. Some screech imploringly, some may do a disjointed dance or backflips, but all send a shiver up your spine. You have just made the acquaintance of Kampung Monyet's masked monkey beggars and you now know why this place is called Kampung Monyet, or "Monkey Village." 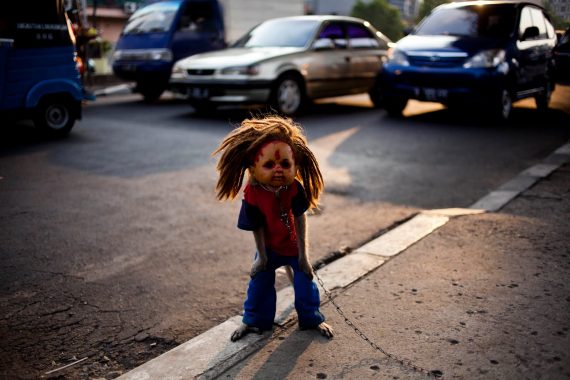 The monkeys of this slum are called topeng monyet, or  literally "masked monkeys," and have their origins in the 1980s as traveling monkey acts to entertain the poor kids of the slums, or kampungs. As the shows became more popular, the monkeys became increasingly used for getting money from tourists. The monkeys, typically long tailed macaques, are either bred in captivity, or captured by poachers in the wild, often snatched away from their mothers while still breastfeeding, to embark on a life of servitude. They are usually trained to walk upright and are most often dressed up in bright, garish costumes and masks, which are meant to make them cuter and more humanlike but in reality just transform them into nightmare fuel. Some of the animals simply have a plastic doll's head from a children's toy shoved over their heads. The sight of these masked monkeys is certainly a bizarre, almost otherwordly experience. Associated Press photographer Ed Wray, who spent some time studying and photographing the phenomenon, succinctly described the common impression that these monkeys have on most:

The sight struck me as so completely surreal. Bizarre, but also surreal in the sense that it struck me that there was some meaning to the juxtaposition of the baby doll heads on the monkeys that couldn’t be put into words. I was visually fascinated by the sight. 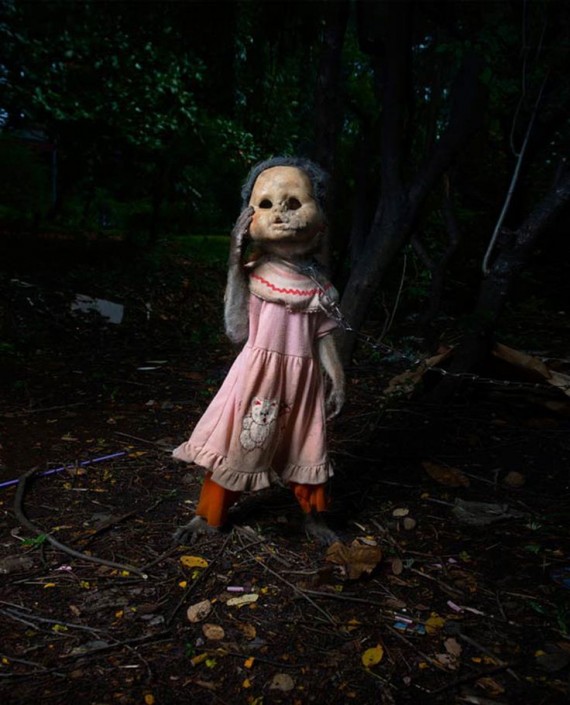 These monkeys are kept by handlers who train them to perform various tricks and stunts, such as juggling, dancing, pushing colorful carts around, walking on stilts, riding toy bicycles, playing musical instruments, and performing acrobatics for tips. Many of these tricks are designed to mimic human behavior as much as possible, and some monkeys are even trained to do things such as smoking cigarettes or praying. They also will directly approach visitors and do simple things such as bow or hold out their hands waiting for some change. Throughout the acts, they remain tethered by a rope around their necks which is held by their handler, usually sitting not far away, who will occasionally tug on it to give a command, signify a change of act, or to reel in the animal and collect any money it has managed to earn. 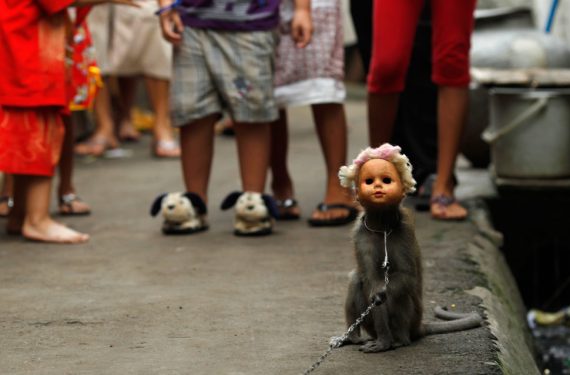 While the shows themselves are typically lighthearted and cute, the training methods used to teach the monkeys these various tricks are grueling and inhumane. In order to teach the monkeys how to walk upright, for instance, a technique known as "the hanging monkey" is often employed. A ring is fitted around the monkey's neck and this ring is tethered to two poles erected upright on either side of the animal. The ropes are tightened until the monkey is forced upright, and its arms are tied behind its back in order to prevent it from using them for balance. This position is meant to teach the animals to rely strictly on their two feet to maintain their balance and footing, as well as to strengthen the muscles in their legs. They will be kept like this for hours on end, after which they will be allowed to rest for a short while before starting again. Some owners will not even give rest periods, instead keeping the monkey in this position all day long. It is not a comfortable or natural position for them, and so it is not uncommon for the monkeys undergoing this training technique to shriek and screech in pain and anguish. At the end of the process, which usually lasts from anywhere from a week to a month, the monkey will have acquired a humanlike posture and the ability to walk about bipedally for long periods of time. This is only the beginning of their arduous training regimen, as they are then subsequently taught to do their tricks and handle various toys and props. Training can last months and entails frequent beatings from the masters in order to break down the will of the animals.

Many monkeys, especially ones that were captured in the wild, do not survive the training. Health problems, injuries, disease, stress, and exhaustion all take their toll, and it is estimated that 40% of the animals do not live to perform, while 60% are unable to complete the regimen due to lack of will or physical strength. Most of the monkeys that die during the process are unceremoniously dumped into the river or even into the garbage, after which the handler will simply acquire another. Captive raised monkeys are more prized and fetch a higher price since it is believed they are more mentally stable, hardier, and easier to train then wild caught ones.

In addition to the cruel training process, the monkeys are kept in horrendous living conditions. When not performing, they are kept in cramped, filthy cages stacked one on top of the other. Here the monkeys will be kept either in small cages too small to even turn around in, or they will be stuffed into larger cages that are packed with up to 15 other monkeys. They remain crammed into these cages, which are usually caked and encrusted with feces and urine, waiting until it is time for them to go out and perform. It is the only time they are released. The monkeys are then dressed up, fitted with their mask, and go out for a few hours to work the crowds before being brought back and once again shoved into their cage. They are fed only a meager diet of plain white rice occasionally supplemented by the odd piece of fruit tossed out by visitors watching the shows. Many of the monkey's are emaciated and suffering from severe malnutrition, yet they go out day after day to dutifully do their performances. 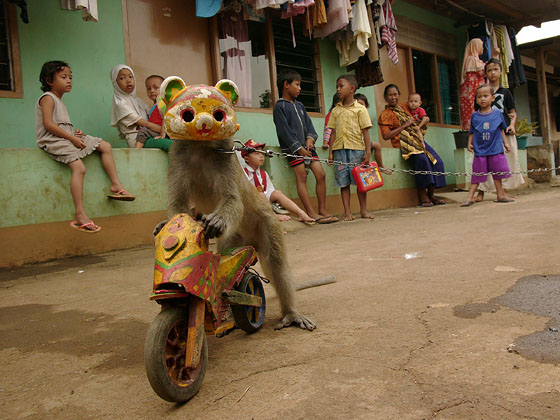 The inhumane treatment and cruelty inflicted on the monkeys is enough to have caught the attention of the animal welfare group Jakarta Animal Aid Network (JAAN), which has begun campaigning to put an end to the practice. The group maintains that the practice of using masked monkeys for street performing violates what they refer to as the five principles of animal welfare: freedom from thirst and hunger, freedom to live comfortably, freedom from pain and sickness, freedom to exhibit natural behaviors, and freedom from fear. JAAN is currently working on convincing the government to enact regulations on the practice, as well as tracking down the main underworld players responsible for trading in the monkeys. They also help to rescue and give sanctuary to the monkeys.

The masked performing monkeys have become a fairly common sight in many places of Jakarta since their beginnings as a mere oddity. Most Indonesians will pass by without giving much thought to them. A few will toss a few pennies out, more out of pity than anything else. It is with Western tourists that the monkeys are able to make the most money and such visitors are often confronted with the masked, costumed monkeys soon after venturing out on to the streets. 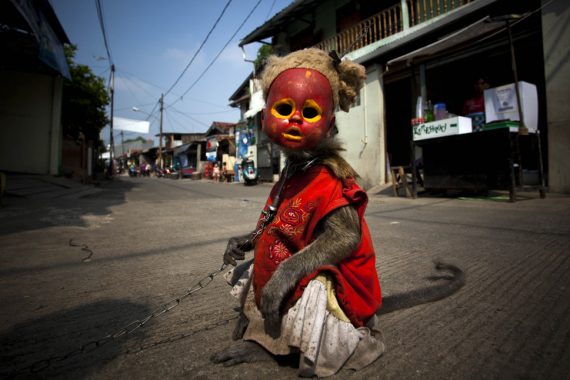 It is tempting to look at the deplorable conditions endured by Jakarta's masked performing monkeys and focus solely on feeling sorry for the animals. However, the practice of keeping monkeys as street performers has many sides and there are high human stakes involved as well. The people who inhabit Jakarta's slums themselves suffer from horrible living conditions and lack of food. In the case of the Monkey Village, this abject, hopeless poverty has forced some into desperation, with keeping the monkeys their only hope of survival. Balancing the needs of the animals themselves with the needs of the people, and recognizing the underlying factors that drive this phenomenon are bound to be a difficult process.

There is no clear way to put an end to it. Perhaps the best way to start is by simply not encouraging it by refusing to throw out your coins to the monkeys, no matter how heartbreaking a sight they may be. For the foreseeable future, it seems that the masked monkeys will remain a feature of Jakarta's slums. They will continue to do their tricks as they stare through doll's eyes, haunting the squalor of the streets, and perhaps haunting our dreams as well. 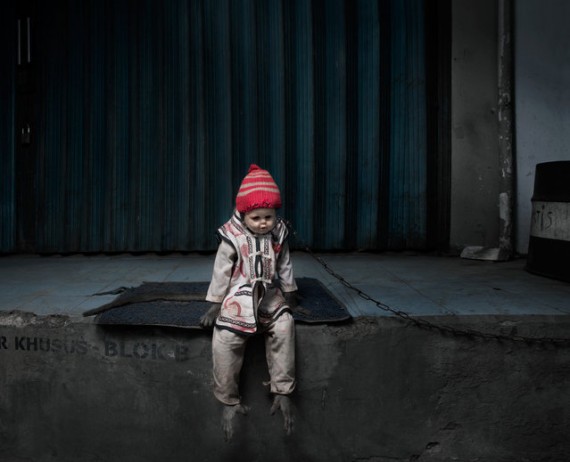