The First Operational Hoverboard Has Arrived

Watch out wheels - your days are numbered. The first operational hoverboard has hit the ramps and it’s only a matter of time before we’re all Marty McFlying to work, school and around town. Well, sort of.

The Hendo Hoverboard was developed in Los Gatos, California, at Arx Pax by CEO, engineer and architect Greg Henderson. The company specializes in what Henderson calls Magnetic Field Architecture, so it should come as no surprise that the Hendo Hoverboard uses magnetic technology. A working prototype was unveiled recently.

The 90-pound Hendo Hoverboard uses four electromagnets on the bottom of the board to create a magnetic field that induces a secondary magnetic field on the ground that punches against it and allows it to hover frictionless about an inch above the surface. The technology is similar to that used by high-speed magnetic levitation trains.

That’s where the path towards ‘a hoverboard in every garage and backpack’ falls back to earth. Currently it can only levitate over a metal surface. Copper works well, as does aluminum. Henderson says aluminum buried under concrete will also work. That’s the costly part, as track for maglev trains runs $750,000 per meter. Henderson thinks he can get the track cost for his hoverboard down to $10,000 per meter and his goal is to be able to hover over any surface. In the meantime, he’s building an aluminum hoverpark.

As it can be seen in the video, the rider uses body weight to maneuver the hoverboard. Unfortunately, the ride is slow and the fun only lasts about 15 minutes before the battery cells need to be recharged.

Target date for making the Hendo Hoverboard available to the public is December 2015 at an estimated price of $10,000. Arx Pax is currently raising money by selling a Hover Engine developer kit (available in July 2015) for $299 which will allow do-it-yourselfers to attach it to anything they want to and hover anything up to 400 pounds for seven minutes.

OK, it’s not Back to the Future but it’s not a ‘back to the drawing board’ hoax either. The day of the hoverboard appears to coming soon. The time-traveling DeLorean will have to wait. 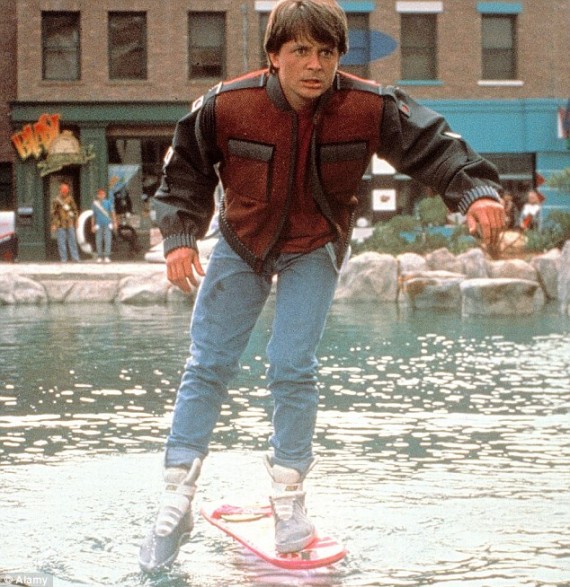