The Lost Mountain World of the Clouds

Jutting from the lush green rain forests of the Amazon jungle there looms a majestic peak that looks like something out of a fantasy or science fiction movie. This enigmatic mountain soars up from the jungle towards the sky, where its unusual flat summit remains almost perpetually wreathed in clouds, fog, mist, and mystery. This is the little explored Mount Roirama, long the source of myths and legends of the indigenous people of the area and a lost world home to a plethora of unique species that exist here in the clouds and nowhere else on earth. It is a breathtakingly beautiful place that is one of the oldest geological formations in the world and possesses natural wonders in abundance,  as well as a wholly unique ecosystem. It is no wonder that the grandeur of this truly unique place has captured the imagination of mankind since prehistoric times. 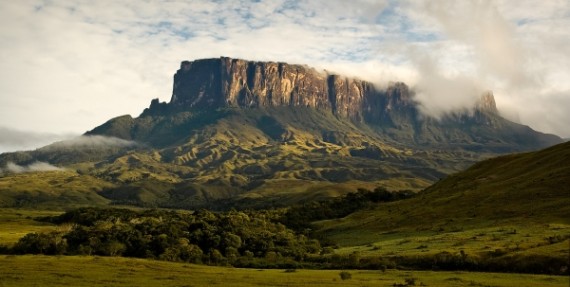 Mount Roirama stands on the intersecting borders of three countries; Venezuela, Guyana, and Brazil, but mostly within Venezuela's vast Canaima National Park. Rising to 2,772 meters (9,094 feet) it is the highest peak of Guyana's Highland Range, which is around 2 billion years old and is considered to be some of the oldest mountains on the planet. Mount Roirama is known as a tabletop mountain, meaning it has a flat summit, and has towering, sheer cliffs on all sides that rise a dizzying 400 meters (1,300 ft) above the jungle below. Sitting atop these perilous cliffs, the sprawling, fog cloaked summit covers an area of 31 square kilometers and is comprised of wind blasted, barren sandstone that is dotted with sandy marshes hugged by a plethora of bristling, low lying endemic plants.

The wind and water sculpted plateau is truly an alien world; a rocky, moonlike landscape thickly cloaked in an eternal cover of fog and clouds and covered with twisted, blackened stone formations, pinnacles of rock, and veins of rock peppered with various crystals. The combination of the fog and the craggy, unearthly terrain on the top of the mountain creates a certain eerie effect on the senses. In a 1930 issue of National Geographic magazine, explorer G.H.H. Tate described the scene at the top of Mount Roirama in his article Through Brazil to the Summit of Mount Roraima:

In the central part of Roraima appears a vast, barren plain. The haze drifting over the scene, the desolation and utter lack of comparative objects, cause one to lose all sense of proportion and distance. Except on the north, the almost featureless plain seems to reach away to infinity

Tate also described the humbling effect that the whole experience of finding one in this alien world has on the human soul. He wrote:

The grandeur and majesty of the summit of the mountain, coupled with an unbroken silence and the enormous scale upon which the whole is executed, are appalling. One feels oppressed, dwarfed, almost as it one were a trespasser

In contrast to the sea of green that surrounds it, the summit here has sparse vegetation and is an inhospitable place for life. The wind and nearly constant rain that pummels the rocky ground here serve to wash away most nutrients, which are expelled over the edges of the cliffs in magnificent cascades of water creating some of the highest waterfalls in the world and the source of many of Guyana's rivers. Despite the forces conspiring against it, there is an abundance of unique plant and animal life that calls this place home, including rare carnivorous pitcher plants and flowers, as well as a new species of toad that is found in only one well defined location atop the summit and nowhere else on Earth. Indeed, the summit represents one of the highest rates of endemism in the world, meaning it carries a high percentage of species found here and nowhere else. In fact, more than a third of all species to be found on the mountain are endemic to this one, specific area. To this day, new species and cave systems containing new species are continually uncovered on the mountain, so it is obvious that we have only scratched the surface of the biodiversity to be found here.

The history of the mountain's exploration is a testament to the awe it conjures in people. The natives of the area had long held that the mountain was the realm of gods and spirits and was not meant for the world of mankind. Early European explorers of the region were absolutely entranced with Mount Roirama and the many sketches and paintings made of it fueled the imagination of people back home. There was a great interest in what lay atop this marvel of the natural world and earnest efforts were made to try and scale the daunting cliff walls. Expedition after expedition throughout the mid 19th century failed in their quest to reach the summit, and indeed for a time the mountain was deemed to be unclimbable. This only further fueled the speculation as to what was up there.

Looking upon the grandeur of this cloud mantled natural wonder it is perhaps not surprising that the author Sir Conan Doyle once imagined dinosaurs inhabiting the misty top and was inspired to write his famous novel The Lost World. In fact, many Victorian scientists truly believed that this was a real possibility, reasoning that the mountaintop had remained isolated from the world around it for millions of years and so could harbor life long since vanished from the world around it. It was even surmised that there may have been ancient lost human civilizations inhabiting the clouds high up on the summit of Mount Roirama. Nobody knew. 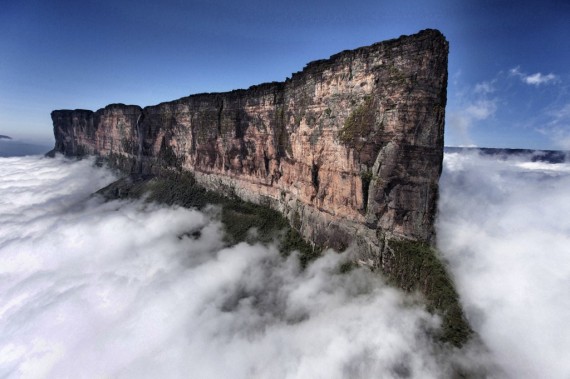 In light of the many defeated expeditions looking for a way up, for a time it was thought that the top of Mount Roirama was effectively inaccessible and would forever remain hidden from the eyes of man. It was not until 1884 that an English ornithologist by the name of Henry Whitley stumbled across a practical way to scale the mountain while collecting rare specimens of various bird species in the vicinity of the mountain. Whitley noticed that part of one of the cliff walls had partially collapsed and left a diagonal incline that seemed to slant up the side of the cliff all the way to the top. He surmised that it was a possible route up the hitherto unscalable wall of rock to the long lost plateau and reported his findings to the Royal Geographical Society.

After this revelation, the find came to the attention of the previous director of the Royal Botanical Gardens, a Sir Joseph Hooker, who mounted an expedition to see if the trail truly did lead to the top of the mountain. Joined by Everard Im Thurn, a curator for the Guiana Museum in Georgetown, and a surveyor by the name of Harry Perkins, the team pushed forth into uncharted jungles to reach a place where no human had ever set foot. After a perilous journey canoeing through rough waterways, slogging through dank swamps, and cutting across nearly impenetrable wilderness, the team managed to successfully mount the summit on December 18, 1884. It was the first time that any human being had ever set foot in this lost land. This expedition in and of itself would yield hundreds of new plant and animal species that were entirely new to science and pave the way for future expeditions that would inevitably follow in their footsteps.

The path which the ornithologist Whitley discovered all of those years ago has proven to be one of the most reliable ways up Mount Roirama even in modern times. The destination is popular with adventurous backpackers, who typically take the same route up the mountain to the plateau as those early explorers did, the inclined path found by Whitney all of those years ago called La Rampa. The only other way to reach the plateau is a highly technical climb requiring specialized gear to scale the sheer vertical cliffs of the mountain, which also possess overhangs that are extremely difficult to climb even for experienced rock climbers. Besides the danger and difficulty involved with reaching the top in this manner, the journey is made more problematic due to the specific permits and authorizations needed to even begin such an undertaking.

Most visitors to the top prefer to take the sloping trail up the side of the mountain from the Venezuelan side. Even with this point of access, the journey is not a particularly easy one. It typically takes hikers at least two days to reach the base of the mountain and make the ascent, plus a two day journey back. Once at the top, the lack of delineated trails, eternal fog, twisted, jagged landscape, and lack of points of comparison make it easy to get disoriented and lost. Many who have journeyed to the top have reported feeling a deep sense of confusion and the sensation of truly being on another world, untethered from the planet they are familiar with.

Despite the increased number of people making it to the top of this kingdom in the clouds in recent years, the plateau of Mount Roirama is still relatively unexplored, and many of its unique species have yet to be documented by science. Even now, new caves and areas are being discovered here regularly. The mountain still holds much of the same mystique it did when it was first observed by early explorers, majestically towering over its forest domain. The mountain has even made its mark on popular culture, serving as the inspiration in 2009 for the Disney/Pixar movie Up, where it is referred to as "Paradise Falls."

Mount Roirama is still undoubtedly an otherworldly, mystical place imbued with an air of magic and mystery. Standing in its towering presence, there is a deep sense of primal awe and a humbling appreciation for the forces of the natural world. The explorer H.G.G. Tate once said of Mount Roirama:

I like to think of Roraima as having personality. Utterly cold and aloof, he inspires reverence rather than affection. Yet the Indians who played as children and grew to manhood at his feet seem happiest when within sight of his frowning cliffs. "Ru-ru-ima, the Father of Waters", is angry, or calm, or speaks through the thunderstorm. Is he kind? Does he ever smile for his Arecuna children?

Whether Mount Roirama smiles over its domain or stands an aloof mountain god forever inscrutable to mankind, one thing is for certain. This is a place that has loomed high and proud since long before we were here, and is likely to keep its mysteries and wonders long after we are gone, to the end of time and beyond, until the Earth is no more and we are a distant memory remembered by none.

The Rendlesham UFO: Which Scenario?