The Quest for the Fountain of Youth

Human kind, indeed all living things have always been tethered to aging and death. For all of our mastery of technology and medical knowledge, it is an inevitable, inescapable fate for us to grow old and die. For thousands of years there have been those who would avert this creeping certainty of aging, who would break the cycle of deterioration, death, and decay. The quest for a way to remain young forever has consumed mankind and throughout history, across a wide range of cultures, there has been a strong belief in lost magical springs with the purported ability to restore youth, stop aging, indeed to staunch the inexorable march of death.

The search for eternal youth and a fountain of youth is a frequent fixture of various myths and legends from around the world. One of the earliest accounts of such a place comes from the 5th century BC, when the Greek historian Herodotus wrote of a fountain in the land of the Macrobians, which gave the people of the region exceptionally long life spans. In the 3rd century AD, Alexander the Great was said to have searched for a fountain of youth, allegedly crossing a mythical land covered in eternal night called The Land of Darkness to reach it. The legendary Christian patriarch and king, Prester John, allegedly ruled over a land containing a similar fountain during the early Crusades during the 11th and 12th centuries AD. In Japan, stories of hot springs that can heal wounds and restore youth were also common and still are to this day.

During the Age of Exploration, when European global exploration took off in the 15th century AD, interest in such a mythical fountain of youth had not waned. The New World of the Americas began to be seen as a potential location for a fountain of eternal youth. The Caribbean in particular was considered a prime candidate, as many islanders spoke of a lost land of wealth and prosperity known as Bimini, which became entwined with the legend of a fountain of youth. The Fountain of Youth was a hot topic in those days. The Spanish historian, Lopez de Gomara, wrote of Indian accounts of a magical river, waterfall, or spring that could reverse aging and could be found in the lands north of Cuba and Haiti. Pietro Martire d’Anghiera, an Italian geographer living in Spain, in 1513 wrote of the fountain as well, saying:

“Among the islands of the north side of Hispaniola, about 325 leagues distant, as said by those who have searched for it, is a continual spring of flowing water of such marvelous virtue that the water thereof being drunk, perhaps with some diet, maketh old men young again”

During this era of exploration of the New World, it was indeed the Spanish who took a particular interest in such a mystical spring, after hearing widespread talk of Bimini and fountains of restorative waters from the Arawaks in Hispaniola, Cuba, and Puerto Rico. Florida was a land of many natural springs, and it was thought that one of these was the mystical Fountain of Youth of local legend. 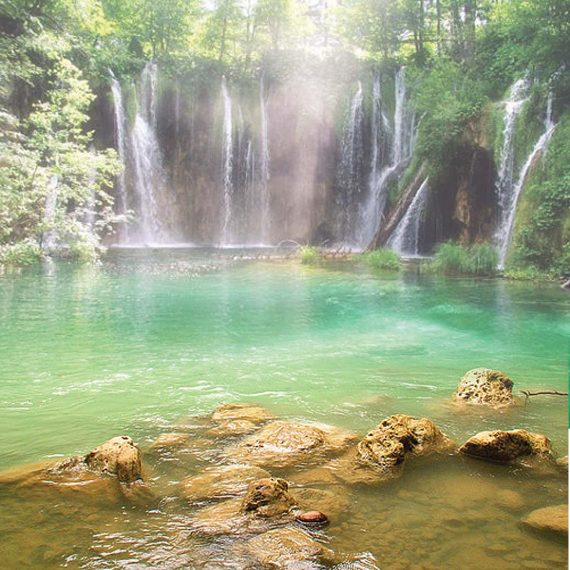 One name has become inextricably linked to the quest for the Fountain of Youth is that of the Spanish explorer and conquistador Juan Ponce de León, who was the first governor of Puerto Rico and, in 1513, led the first European expeditions into what would become Florida. It was alleged that during his explorations of Florida, while looking to find lost gold and claim land for Spain, the explorer had the ulterior motive of finding the lost land of Bimini and thus the Fountain of Youth, which he was convinced existed. It was claimed that during his forays into Florida, the explorer would unofficially go off with a small contingent of men in an effort to locate the fountain.

Although Ponce de León became connected to and perhaps best known for his quest for the Fountain of Youth, it has long been debated as to just how much fact there is to this story. One of the problems lies in the fact that there are virtually no surviving records of the expeditions to Florida written by Ponce de León himself, and the fountain is not mentioned in any that do exist. Most accounts that we now have were actually written long after his death by native arrow in 1521. Nevertheless, historical references to the explorer’s obsession with the mythical fountain abound. One of the best sources of information on Ponce de León’s travels and search for the fountain is the writings of Antonio de Herrera y Tordesillas, who was the Chief Historian of the Indies in 1596. Amongst his accounts, Herrera wrote in his impressively titled record Historia general de los hechos de los Castellanos en las islas y tierra firme del Mar Oceano of Ponce de León’s quest:

“Juan Ponce overhauled his ships, and although it seemed to him that he had worked hard he decided to send out a ship to identify the Isla de Bimini even though he did not want to, for he wanted to do that himself. He had an account of the wealth of this island (Bimini) and especially that singular Fountain that the Indians spoke of, that turned men from old men into boys. He had not been able to find it because of the shoals and currents and contrary weather. He sent, then, Juan Pérez de Ortubia as captain of the ship and Antón de Alaminos as pilot. They took two Indians to guide them over the shoals… The other ship arrived and reported that Bimini had been found, but not the Fountain."

This seems intriguing, but considering that it was written over 70 years after the explorer’s death, one has to wonder how much veracity the account holds. This information could have been hearsay, and was probably second or third hand information at best.

An even earlier account in 1535, closer to Ponce de León’s death, was written by a court chronicler by the name of Gonzalo Fernández de Oviedo, in his book Historia General y Natural de las Indias, in which he mentions the explorer going off looking for the fountain using information gathered from the natives of the area. Oviedo’s report is difficult to take at face value for several reasons. It is said that the chronicler did not like Ponce de León, and wrote the account in a way that suggests the explorer was trouncing off on a fool’s errand. In short, it is believed that the whole story written by Oviedo was an attempt to gain favor with the courts and was a political attack designed to discredit Ponce de León and basically make him look like an idiot. Oviedo even went as far as to suggest that Ponce de León’s quest for the fountain was part of a misguided attempt to cure his sexual impotency. Ouch. The political animosity between the two was understandable, since Oviedo was in with Diego Columbus, who had helped to push Ponce de León out of Puerto Rico and just so happened to be the son of none other than Christopher Columbus. Due to this underlying rivalry, it is hard to know how reliable Oviedo’s account is.

Other historical accounts also make mention of Ponce de León’s quest for the Fountain of Youth. In Francisco López de Gómara's Historia General de las Indias of 1551, the author describes Ponce de León’s search for the fountain. In 1575, the author Hernando D'Escalante Fontaneda wrote in his memoir that the Fountain of Youth was located in Florida and that the Spanish explorer had gone looking for it there. Fontaneda claimed to have been a prisoner of local natives for 17 years as a boy, and described the Indians as making use of a lost river that contained curative water, which he says Ponce de León was looking to find. Fontaneda’s account has a very skeptical feel to it, and the author seems to doubt that finding the fountain was the explorer’s first priority. Although there is a certain romantic element to the idea of Ponce de León going off in search of fabled lands and mystical springs in the jungles of ancient Florida, it is uncertain if it ever happened at all. In the end, we are left with scattered historical documents that were written after Ponce de León’s death and none of which were written by the explorer himself, leaving his true intent and what really happened lost to the mists of time.

This uncertainty regarding the historical quest for the Fountain of Youth has not stopped the legend from enduring. Some even claim that the explorer was successful in his mission, indeed possibly still alive somewhere out there, enjoying his perpetual youth. To this day, there is a spring said to be the actual one that Ponce de León was searching for in St. Augustine, Florida, which is said to be the oldest city in the U.S. The Fountain of Youth Archaeological Park in St. Augustine has become a popular tourist destination, where visitors can drink cups of water from the fabled spring. The park has seen various important archeological finds, such as an ancient cemetery and the ruins of missions dating back to the city’s founding. Although the site undoubtedly has historical value, the elderly people who come to visit in droves have yet to miraculously regain their youth, and it is doubted if Ponce de León ever even set foot in St. Augustine.

Whether Ponce de León ever really did search for the Fountain of Youth, there have nevertheless been stories over the years of those who have claimed to have found it. In 1989, the author Charlie Carlson allegedly interviewed a man who claimed to be a member of a secret society that had located the Fountain of Youth and were tasked with protecting it. The interviewee claimed to be 93 years old, whereas Carlson described him as looking around 40. The man claimed that the fountain had been found sometime before 1845 and that it was his society’s duty to make sure that it remained secret from the world. This anonymous informant reportedly offered proof to back up his claims in the form of census records for all of the members who had lived past 110 years old, of which there were quite a few. Some had apparently lived to be up to 122 years old while appearing to be much younger. Although many had died in accidents such as drowning, against which the magical waters offered no protection, not a single one was found to have died of old age. Is there really a secret cabal of immortals out there who have drunk from the fountain and have pledged to eternally hide its secret? Nobody knows.

While in modern days it will likely be genetics and stem cells that lead to prolonged life, mankind’s quest for immortality is not new and has taken many forms through the centuries, with various elixirs, magical charms, and famous artifacts such as the Philosopher’s Stone all reputed to grant everlasting life. Perhaps in the case of Florida's Fountain of Youth there may be such a place tucked away among the many springs that are to be found here. Whether it is there or not, it is intriguing to imagine such wonders, and there will be those who will search no matter what, enamored with the notion that it could be possible to live forever if only they could find it. Maybe there are even those who already have.

An Alternative History of Mankind