Unwind from what? Is living with humans really so stressful to aliens known as Tall Whites that they can only relax by playing the slots, watching showgirls and stuffing their faces at buffets until they become Big and Tall Whites ? That’s just some of what author and former Air Force serviceman Charles Hall is telling audiences on his latest book tour in Norway.

Charles “Charlie” Hall is the author of a series of four sci-fi novels called “Millennial Hospitality” which he later revealed were based on his real experiences in the military.

In 1964, when I was a weather observer at Nellis Air Force Base in Nevada, I witnessed interactions between the military and a group of mysterious tall, white, human-like extra-terrestrials. Their craft are capable of traveling faster than the speed of light because Einstein was wrong about relativity. 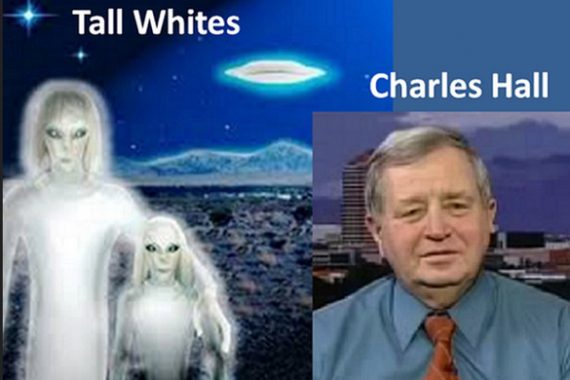 According to a news report on his book tour, Hall says the Tall Whites have been working with our military since the 1950s and have shared their technology with us. Hall says there was a lot of interaction between the aliens and humans while he was there.

That interaction included visiting Las Vegas. He says the aliens dressed in human clothing, put on sunglasses and blended in with the other odd-looking tourists on the Vegas strip. Their favorite hangout was the Stardust and they were always surrounded by CIA agents. Gee, how much fun could that be?

Tall Whites are said to be human-like with large blue wrap-around eyes and translucent platinum blond hair and can be up to 8 feet tall. It’s probably good that the aliens were in disguise and under guard, according to Hall.

When you encounter the Tall Whites, it’s such a shock, you are not sure if you are looking at a ghost or an angel, or if you are dreaming.

Before you go dismissing Hall’s stories, consider that Iran claims documents released by Edward Snowden prove that Tall Whites not only exist, they have been running the U.S. since 1945 and helped Nazi Germany come into power.

I’m sure there’s much more info available about Tall White aliens and Charles Hall. Feel free to add your insights and links.

Castle With a Ghost For Sale in Scotland