Beware of the Hat Man

A couple of nights ago I finished reading the new book from Heidi Hollis, The Hat Man: The True Story of Evil Encounters. This is a fascinating book that deserves to be read by students of various areas of research, including UFOs, hauntings, alien abductions, demonology, other realms of existence, the afterlife, and much more, too, including the Men in Black - the latter being an issue I'll return to later.

I have known Heidi since 2005 when we took part in a week-long filming for a never-aired television show on the Roswell affair of 1947. I also know Heidi to be a skilled writer and researcher, and someone who knows how to grab the attention of her readers and write in a fashion that is both informative and entertaining. And, with that said, onto Heidi's latest release.

The Hat Man is a book that is as illuminating as it is disturbing. Across its 240 pages it tells of the rise, development, and spreading phenomenon of the creepy character of the book's title. And Heidi - as a result of her research, writings, radio shows, and willingness to help people - has become the undeniable focal point for reports of the Hat Man.

All of this brings us to the most important question of all: who, or what, is the Hat Man? Well, that's a very good question. Put simply, an untold number of people, dating back to an untold period of time, have reported  encounters with what is clearly a malevolent entity with intentions that are not good - not in the slightest. 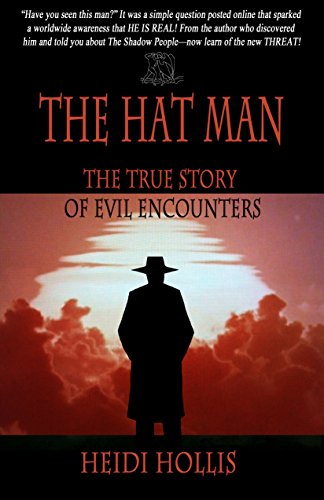 Most noticeable about this creepy figure is, of course, his hat. Sometimes, it's a fedora, other times it's an old style top hat. Occasionally, it's more like a cowboy hat. But, regardless of the kind of hat, it's always present.

Many of the encounters occur while the victim is in a distinct altered state - that of sleeping. Nightmarish accounts of terrifying visitations, in the early hours of the morning, from the Hat Man abound in the pages of Heidi's book. None of them are positive. All of them are negative. The Hat Man appears to be attracted to or provokes (maybe, even, both) bad luck, misfortune, ill-health, and even death. Soul-stealing may be one of the calling cards of the horror in the hat.

What makes the Hat Man so difficult to pin down  - in terms of what he is and what he represents - is that he appears in numerous situations. Those who have dabbled with Ouija boards have received ominous visits. As have alien abductees who have reported seeing the man in connection to the so-called "Grays" and "Mantis"-type aliens. People whose lives have taken bad turns find themselves plagued by the Hat Man.

Even more ominous, the Hat Man appears to be attracted to certain families - several generations will report sightings of this grim and devious thing. And if that was not enough, Heidi tells of how the Hat Man intruded upon her very own life: friends and family reported strange Hat Man-style experiences. As Heidi's research progressed, so did what appeared to be an uncanny awareness on the part of the Hat Man that Heidi was tracking him down.

This is something I have personally experienced on a number of occasions: when we look for these entities something appears to alert them to what we're doing. Heidi also notes how more than a few witnesses to the Hat Man have had prophetic dreams, and nightmares of a dark and apocalyptic future involving nuclear war.

Now to the Men in Black, which I mentioned at the beginning of this article. In the same way that Heidi gets a massive amount of Hat Man reports, so I get a great deal of Men in Black reports - having written a couple of books on the subject and numerous articles. Heidi touches upon the MIB mystery in her book - which is not surprising, given that the MIB and the Hat Man look very alike.

But there's something else: I have a number of cases on record where people received MIB visitations after using Ouija boards - just like Heidi with the Hat Man. I have reports of people who have linked outbreaks of ill health with the MIB - which is also an aspect of the Hat Man controversy.

And let's not forget, when - near-singlehandedly - in the early 1950s Albert Bender ushered in the phenomenon of the Men in Black, his MIB were nothing like government agents. They manifested in his bedroom, late at night, amid an overpowering stench of brimstone. They had bright shining eyes and oozed menace. On top of that, Bender's health was dramatically affected (in a bad way, I should stress) by his hat-wearing visitors of the night.

Do I think the Hat Man and the Men in Black are both part of something bigger and inter-connected? Yes, I most certainly do.

Heidi pulls no punches when it comes to her theories on what's afoot: she is firmly of the opinion that the Hat Man is a devilish entity - as in literally. As a Christian, Heidi believes the Hat Man to be a minion of the Devil, a thing that is playing a major role in the battle between good and evil, and for the souls of the Human Race.

Early Mesoamericans Got High on Toads and Enemas