Earth’s Longest Night: Myth and Mystery of the Winter Solstice

It's that most wonderful time of the year, as singer Andy Williams famously reminded us through his pop-holiday caroling. More specifically, it coincides with the arrival of winter, and the ancient celebration that surrounds the year's shortest day, and thus, it's longest night.

Happy Winter Solstice, in other words.

Nonetheless, with every passing year, the length of a day generally does increase by about 15 to 25 millionths of a second--barely discernible, but nonetheless significant. Especially since this historic day of passage into the winter season was recognized as being such long ago, back in the ancient days of yore in which one popular term for the solstice--yule--had its origins.

Though truly, the term is probably derived from the Old Norse jól, which signified the 12-day winter celebration from which the famous "Twelve Days of Christmas" was also derived. It's no secret that many Christian hallmarks of the holiday season actually have their roots in hǣthen or, more proper in modern-speak, pagan traditions in this way.

The holdovers from ancient times that still adorn our entry into the winter season are indeed fascinating. Greater, perhaps, than our projections of reindeer and the rosy-cheeked Father Christmas are the more mysterious allusions to life and death itself, and to the general inevitability of change, which were encapsulated within the passage of the seasons by the ancient mind of man. These traditions are reflected in the verse of medieval writers, such as the poem "I Have News For You," dating back to the 9th century, one that is likely of Irish origin:

I have news for you:
The stag bells, winter snows, summer has gone
Wind high and cold, the sun low, short its course
The sea running high.
Deep red the bracken; its shape is lost;
The wild goose has raised its accustomed cry,
cold has seized the birds' wings;
season of ice, this is my news

News was often carried in the form of poetry or song in the old times, a tradition mirrored in the later performances of mountain minstrels in parts of the rural Appalachian mountains, where folk music of the Southeast borrowed heavily from European song and verse such as these. Similar themes were reflected, albeit more merrily, later in the 13th-century English poem "The Olde Year Now Away is Fled", which offers description of holiday traditions that are more familiar to the modern reader:

The olde year now away is fled,
The new year it is entered
Then let us now our sins downtread
And joyfully all appear
Let's be merry this holiday
And let us run with sport and play
Han sorrow, let's cast care away -
God send you a happy new year

Come, give us more liquor when I do call
I'll drink to each one in this hall
I hope that so loud I must not bawl
But unto me lend me an ear
Good fortune to my master send
And to my dame which is our friend
God bless us all, and so I end
And God send us a happy new year

The ancient traditions pertaining to the change of the seasons reflected more than just what would eventually become the hold-overs of holiday festivity. Fundamental changes to the cycle of human existence, and how we would relate to the world around us, are also rooted in the celebrations of the ancients. With the institution of modern calendar years, some have argued that the disconnect between humanity and nature has widened, as was suggested in 1998 by Daniel Giamario in his essay, "Mysteries of The Winter Solstice: Reflections on Calendars, Sacred Festivals And The Turning Of The Ages":

[T]he calendar now used by the entire world works practically, economically and politically, but is in essence not really about anything! It is an artificial secular construction completely divorced from the natural rhythms and cycles of the natural world... it’s no wonder some have hinted that our current calendar was intentionally constructed as part of a scheme devised by those in power to disconnect the people from a natural connection to the land and sky. This separation and disconnect is a major feature of western patriarchal civilization and the results are readily apparent in the countless global problems we are now facing.

What governs the passage of day into night, of course, is Earth's spin as it rotates around the Sun. Hence, the winter solstice is also recognized as being intimately connected with the Sun, as was evidenced in many ancient traditions, and the universality of alignment between ancient ceremonial sites and the sunrise on such occasions. Mark and Angela Pritchard are among those who have chronicled the spiritual significance of this, such as in their eBook The Path of the Spiritual Sun, which can be found at their website. Of ancient Egypt and its solstice sun-worship, the authors wrote the following:

The connection between the winter solstice and the birth of the sun at the dawning of creation is why the ancient Egyptians aligned their Temple of Karnak, the largest temple in the world, to the winter solstice sunrise and dedicated it to their supreme creator god Amun. This temple was devoted to creation, and was even expanded upon according to the Fibonacci sequence, which is a mathematical principle found in the growth and expansion of life.

This brings to mind the manner in which researcher Graham Hancock celebrated the solstice, as he Tweeted an alluring photo of the Temple of Karnak in Upper Egypt: 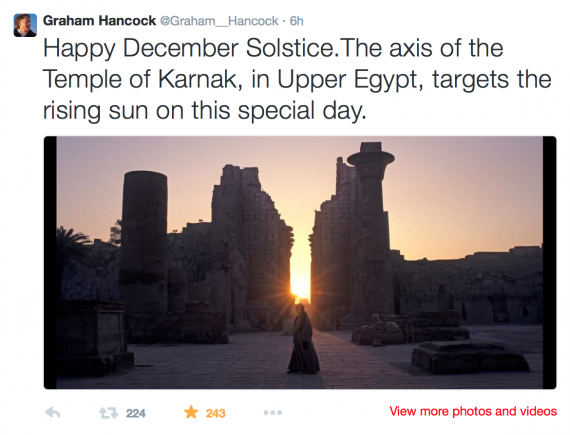 However you choose to celebrate the coming of winter, it is sometimes helpful (or heathy, depending on your view) to remind ourselves of that aforementioned "disconnect" that splits us from the natural world. In doing so, we recognize the science, along with the myth and mystery of the solstice, as an inner awakening of the old ways, and an acknowledgement of the ancient communion humans shared with the changing world around us.