Some time ago, I brought you the story of The Bennington Triangle and the Man-Eating Stone of Glastonbury Mountain.  Even by the title alone, you can probably tell that the accompanying story is somewhat fanciful.  If you follow the link (which I hope you do), you’ll find that the Bennington Triangle does seem to be a real thing, and the disappearances there are troubling to say the least.  But, I mean, stones can’t really eat people.  Can they?

Far be it for me to tell you what’s real and what’s not.  What I will tell you is that stones can – and do – eat people.  Though it’s probably not what you’re thinking.

On July 12 of 2013, a six year old boy named Nathan was, in point of fact, swallowed whole by stone.  But in his case, it wasn’t a solid stone, it was a sand dune.  According to his father, he had been swallowed up by the sand as if he’d been fed to the Sarlacc pit on Tatooine.  It turns out it was nothing so nefarious, though it was almost just as deadly.

Nathan and his parents were spending what would otherwise have been a beautiful day climbing what’s known to locals as Mount Baldy.  No, that’s not an insulting nickname for Mount Rushmore.  It’s actually the name of the tallest lakeside sand dune in the world, and it resides in the Indiana Dunes National Lakeshore Park, along the southern shore of Lake Michigan.

I know what you’re thinking: ‘there are sand dunes in Indiana?’  And yes, there are.  More to the point, there are massive, moving sand dunes all along the lakeshore, and it was on Mount Baldy that little Nathan almost lost his life.

We don’t know much about how he happened to get sucked in, but we do know that it took rescuers three and a half hours to find him and dig him back out.  Amazingly, he survived the ordeal, which is another mystery in and of itself, but there’s more to tell before we get to that.

To make this all the more unbelievable, on the same day, at the same time, in the same location, Indiana University Northwest’s very own Erin Argyilan, a geoscientist, was on scene collecting routine data on the dune and its movements.  You see, sand dunes have a penchant for not staying put, they’re almost alive.  They shift and settle, and they migrate along the lakeshore at a surprising rate, and it’s Argyilan’s job (or at least part of her job) to track those movements and provide predictions for erosion patterns and other very interesting things that result from the restlessness of sand dunes.

Unfortunately for little Nathan and his parents, Argyilan’s expertise was of little help that day.  It ultimately took a team of more than 50 rescuers and two excavator machines to dig him out, but Argyilan’s keen knowledge of the geomechanics of sand dunes did provide something else… confusion.

Nathan had fallen into a hole; one of many strange, winding, pipe-like cylinders made of soft sand that they found just under the surface of the dune.  When he was found some 3.5 hours later, Nathan was unconscious and not breathing (and was said to have been “ice cold”, which is probably what saved his life), but luckily rescuers were able to revive him and he walked away without serious injury.

Here’s the problem with all of this.  That hole Nathan fell into… it defies everything we know about the geophysics of sand.  It should not be possible for such a hole to form below the surface of such a sand dune.

Let’s think about this for a moment.  You’ve all seen, and probably handled at some point, an hour glass.  That’s a simple device used to tell time, or more accurately, to measure the passage of time for specific periods.  They’re filled with sand (or some analogous material), and when flipped upside down, the sand flows by the action of gravity, from the top chamber into the bottom through a small opening between them.  Each time you flip the hour glass, the sand does this little dance around the drain and falls to the bottom chamber.  It just so happens that the same volume of sand, flowing through the same hole, will take roughly the same amount of time, each and every time it’s flipped.  Of course, we all know why that’s important here, right?  In case you don’t, here’s why:

The silica and small particulate stones that make up sand don’t normally stick together.  When you pick up a handful, it runs through your fingers almost like a liquid.  The nature of sand, being a collection of free moving particles, means that the hole Nathan fell into shouldn’t exist.  It should have been filled with sand and therefore not been a hole at all.  Its structure shouldn’t have been able to form.  It simply should never have been in the first place. 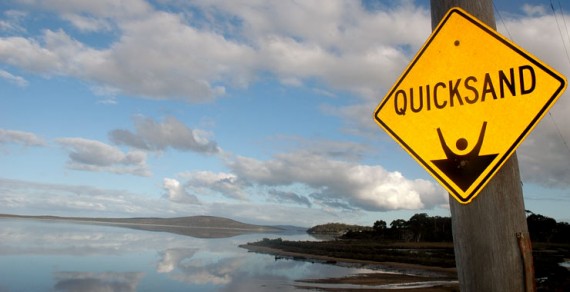 As I’m sure those facts offer little reassurance to Nathan and his family now, Erin Argyilan realised straight away that there was more to this Mount Baldy than met the eye.  This mystery had a lasting impact on Argyilan, it calls into question everything she knows about geology – and being a geologist, that’s probably quite a bit.

In an era where sinkholes and the havoc that they wreak is readily available for browsing on YouTube, and where the notion of quicksand is little more than a tired Hollywood trope over-used by Gilligan's Island, it bears emphasising that this was not quicksand – nor, dear Indiana Jones fans, was it a “dry sand pit”.  Quicksand, whether dry or wet, is the result of the density of the sand being reduced by the introduction of either water or air.  Basically, make the space between granules bigger, and the surface can sustain less and less weight.

That’s not what happened in the case of Mount Baldy; we still don’t know what happened, or how it happened.  And as such, that entire section of the Indiana Dunes National Lakeshore has been deemed off limits to the public, to ensure that no one else falls prey to the man (or boy) eating sand dunes of Lake Michigan.

We all pretty much take for granted the sand beneath our feet.  It’s been calculated, roughly, that there are 7.5 x 1018 grains of sand in the beaches of earth.  Or 7,500,000,000,000,000,000 (seven quintillion, five hundred quadrillion grains).  And that doesn’t even include deserts, of which, much like the oceans, we have explored barely a fraction.

In this case it turned out OK, little Nathan survived without serious injury, but it could have been a lot worse.  It makes me wonder how many of the missing people, from the Bennington Triangle story and others, may have succumbed to the hungry bite of sand.