Half-Male, Half-Female Cardinal and Other Gynandromorphs

Is that a lone bright red male cardinal in your birdfeeder? No, says the neighbor living on the other side – it’s a female. Could you both be right? According to a newly published study in The Wilson Journal of Ornithology, you’re both right because you’re looking at a bilateral gynandromorph. A what?

Half-male, half-female creatures of any species are extremely rare. The subject of the study, a Northern Cardinal (Cardinalis cardinalis), was spotted in Rock Island, Illinois, from December 2008 to March 2010, allowing researchers to observe it closely for over 40 days. According to the report by Brian Peer and Robert Motz of the Western Illinois University Department of Biological Sciences, the gynandromorph cardinal had female plumage on the left and male plumage on the right but did not seem to be treated differently by the other normal cardinals. However, it was never seen with a mate of either sex and never chirped.

Bilateral gynandromorphs have both male and female characteristics that are divided evenly on either side of the body. That’s different than a hermaphrodite which has two sets of sex organs. Gynandromorphs are the result of a genetic malfunction during the early stages of cell division after fertilization. It’s most often seen in cardinals, finches, chickens, lobsters, crabs, butterflies and fruit flies.

What about humans? In birds and crustaceans, sexual identity occurs near the start of cell division, while in mammals it’s determined much later as a result of hormonal stimulus. Josephine Joseph, the famous sideshow half-man-half-woman who appeared in the 1932 movie “Freaks,” was never medically verified as a gynandromorph or even a hermaphrodite. Most sideshow acts are male or female impersonators using heavy makeup, exercise or plastic surgery to achieve the look. 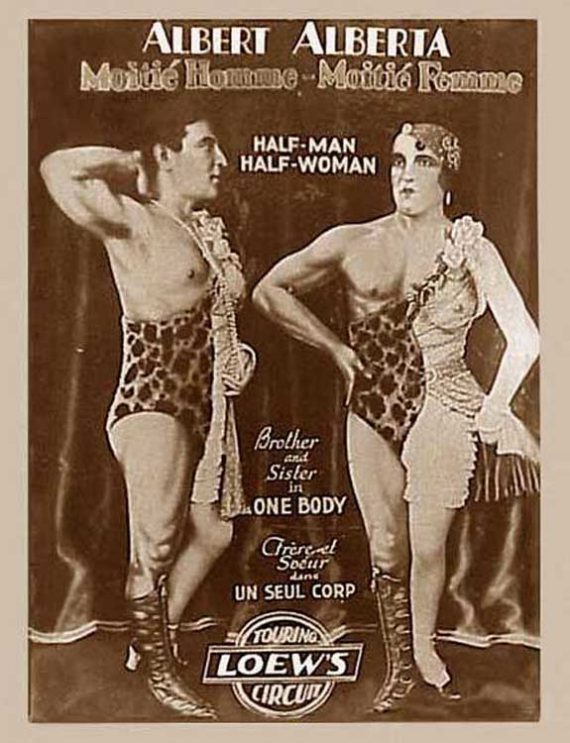 I wonder which side of the cardinal gets up early for the worm?