Welcome to the latest edition of “Weird Stuff Found on the Surface of Mars.” Today we have what looks like a enormous oatmeal cookie – and by "enormous” we’re talking 1.2 miles in diameter. Is this an ad to lure giant aliens to Mars or a lament by a snack-deprived Martian hoping someone on Earth sends up cookies rather than inedible rovers?

The circular surface feature was photographed by the Mars Reconnaissance Orbiter in the in Athabasca Valles, north-central Elysium Planitia. It’s hard to miss because it’s in the middle of a smooth area, making it look like an island (although “cookie” sounds a lot more interesting).

The region where the ‘island’ was spotted is called the Athabasca Valles  located in north-central Elysium Planitia. According to NASA’s Jet Propulsion Laboratory, the flat surface was caused by lava flow 500 to 100 million years ago. That sounds old but it’s actually one of the more recent lava formations.

Elysium Planitia is the second largest volcanic region on Mars with three volcanoes: Hecates Mons, Albor Tholus, and Elysium Mons. The Athabasca Valles is a channel cut by flowing lava and is covered with hundreds of rings and cones which scientists believe were formed as steam erupted through the lava.

However … that’s not what made the giant cookie. Here’s what JPL proposes as a possible cause:

It is highly possible that volcanism played a role in creating this feature. Perhaps lava has intruded underneath this mound and pushed it up from beneath. It looks as if material is missing from the mound, so it is also possible that there was a significant amount of ice in the mound that was driven out by the heat of the lava. There are an array of features like this in the region that continue to puzzle scientists.

Whatever it is, NASA plans to study it further. The face of President Obama will just have to wait. 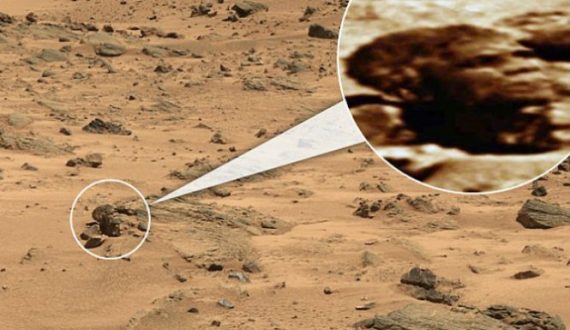 The Bigfoot of Japan