Are aliens showing off their latest weaponry to the astronauts on the International Space Station or are they just a bunch of extraterrestrial pranksters playing with a galactic laser pointer? Those and more possible explanations have been bantered about as viewers of the ISS video feed spotted a red glowing ball appear to fire a red glowing laser beam in the direction of Earth.

The laser show appeared on December 5th at around 09:20 AM GMT on the feed from the webcam located on the outside of the space station. While red spheres have been spotted around the ISS before, this is the first that appears to be firing a laser beam.

Since it’s beyond the range of a laser pointer on Earth, one thought is that an astronaut on the ISS is playing with one. That would be a first, since they've given plenty of presentations without one. It could be a reflection, but a reflection of what? Then there’s the “problem with the camera” reasoning. I join with the chorus on this one in wondering why NASA would spend so much on the space station and go cheap on the camera.

The European Southern Observatory’s Very Large Telescope occasionally beams a laser skyward to create guide star to help adjust for atmospheric distortion and in fact did so on December 5th, but no one has confirmed that’s what this was. There’s also a new laser communications system on the ISS called the Optical Payload for Lasercomm Science (OPALS) that is supposed to be used for payload guidance. Again, there’s been no indication this red globe and beam was related to OPAL.

There have been enough sightings of UFOs and other strange objects outside the space station that the powers that be are starting to run out of explanations. What else could the glowing ball and laser beam be? Are we ready for it? 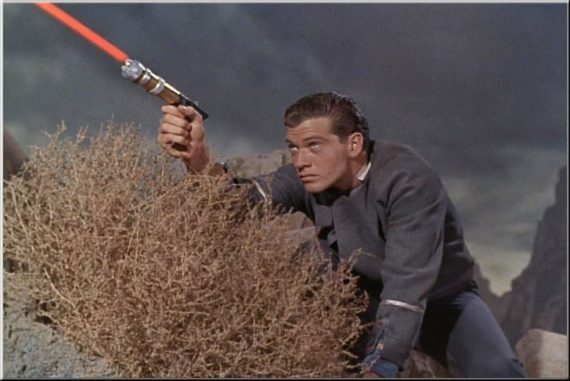