Space Review: The MIB Are Back

Back in the early 1950s, a new aspect was added to the growing UFO phenomenon: the Men in Black. Yes, there were one or two pre-1950s MIB encounters (such as the saga of the sinister character that terrorized a certain Harold Dahl, one of the key figures in the notorious UFO event at Maury Island in June 1947). But, overall, it was the 1950s that saw the rise of the MIB.

We pretty much have one person to thank for that rise. His name was Albert Bender. From his home in Bridgeport, Connecticut, Bender created the International Flying Saucer Bureau, and went on to publish a newsletter/journal called Space Review. It was filled with information on then-recent UFO encounters, letters from fellow researchers, and much more of a flying saucer nature.

In 1956, Gray Barker wrote a book titled They Knew Too Much About Flying Saucers, which told the story of Bender's entry into Ufology, and of his mysterious exit from the subject, too. In Barker's book, Bender's decision to quit UFO research is due to threats issued by the Men in Black - who come across like agents of some highly classified, government agency.

Now let's take a jump forward to the early 1960s: that's when Albert Bender wrote his own book on his alleged experiences with the MIB. Its title was Flying Saucers and the Three Men. The "three men" being the black-garbed band that terrified Bender into silence. In Bender's own account, the MIB were nothing like the MIB of the type that Barker wrote of, or of the kind portrayed by Tommy Lee Jones and Will Smith in the MIB movies.

Bender's MIB were pale-faced, ghoulish things that looked like a combination  of 1950s-era mobsters and reanimated corpses. They manifested (as in literally) in his attic bedroom amid a foul odor of brimstone, and had bright shining eyes. In fact, they were far more like the clearly supernatural "Hat Man" (of Heidi Hollis' book of the same name) that attracts so much attention today.

So - by now you may be wondering - why am I bringing up the matter of Albert Bender and the MIB, an affair that dates back more than 60 years? Well, I'll tell you. Albert Bender's Space Review journals have just been published as a new, packaged edition. 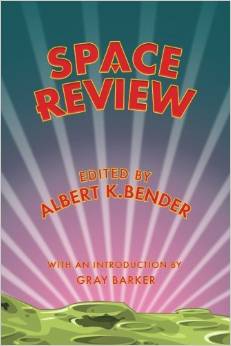 I have copies of some of the originals, but, if you don't have them, and you're fascinated by the MIB mystery, this is something you won't want to miss - mainly because the journals provide deep insight into what was going on in Bender's life and work prior to the MIB visits (and also at the height of them, even though Bender was very cautious about what he said of the MIB in Space Review).

The bound edition of Bender's Space Review publications is published by New Saucerian Press, who say the following:

"This rare anthology was originally published in conjunction with Bender’s first book, Flying Saucers and the Three Men, which was beset by various 'jinxes,' Men in Black attacks, missing manuscripts, psychic disturbances, and other unusual delays. Until now, these issues of Space Review were only available to members. For the first time ever, they are being made available for the general public to enjoy.

"Inside, one finds interesting details that may lead to some understanding of what exactly happened to Bender, who became a media star after announcing he had been taken to a 'bisexual' planet, Kazik.  According to Bender, the denizens of Kazik had not only surrounded Earth with an array of orbiting spacecraft, but had also buried “motherships” in remote regions like Antarctica, in an effort to extract a key substance from our seawater.

"Bender’s colorful descriptions of the people of Kazik, having received wide attention in the early days of ufology, influenced a generation of saucer enthusiasts, who put the stories into mass circulation. As a result, many elements of Bender’s fantastical tale can still be found today, in programs like Futurama, The Matrix, X-Files, and countless others."

For MIB enthusiasts, or those who want to learn more about the MIB and how the phenomenon really kicked off in the early 1950s, Space Review is required reading!

Artificial Intelligence: The Worms are Rising Up!