The Incredible Hermit Caves of Romania

If there is a quintessential European nation, country or group of people who personify the rest of the world’s idea of what it means to be European, Romania might be pretty close.  Its storied history, and the contributions of the Romanian people in literature, art, and philosophy are well known; and who doesn’t think of beautiful Gothic castles and churches when they hear the word Romania?

Of course, many people around the world see in Romania a country of myth.  They see the inimitable Count Dracula and his iconic Transylvanian castle.  They see the birthplace of monsters, of dangerous things in dark forests, of mysteries on foggy mountains, and horrors unseen in the night.

None of that’s real though.  Or, well… most of it isn’t real.  We all know – or we think we know – that Dracula really did exist, in some form or another.  The Romanian government keeps his famed castle as a tourist attraction today, though the history of it remains somewhat blurred to the outside world.  Parts of the country do have foreboding forests, nestled between its 14 mountain ranges, where indigenous species of wolf, and bear, and wild boar still roam free to this day (albeit in dwindling numbers, unfortunately). 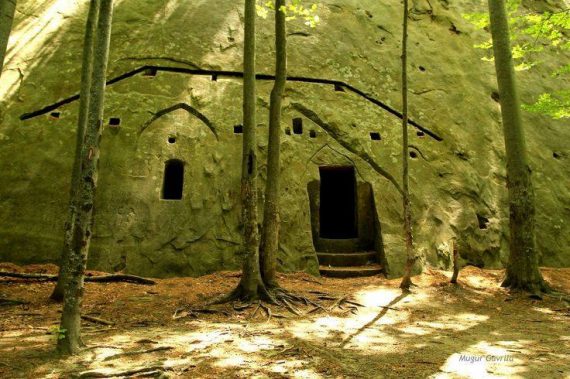 It’s easy to see how those of us who see only portions of this beautiful land on TV and in story can fall prey to fantasy and myth.  It no doubt wouldn’t surprise you then, to find that Romania still holds some well kept secrets in its mountains and small villages?

Romania consists of 41 counties, and situated in the southern interior is one called Buzău.  This county is home to some 400,000 people and it hosts the southern end of the Eastern Carpathian Mountain range.  It also hosts, in those mountains, a wonderful gem of culture and architecture.  Several, in fact.

There’s a commune, known as Colţi, nestled into the curvature of the Carpathian Mountains (yes, the mountain range that loaned its name to the evil Vigo the Carpathian of Ghostbusters II, among other characters) which consists of a number of small villages.  These villages, such as Aluniş and Nucu, are the surviving remnants of an ancient troglodyte community.

Now, lest you take that in the wrong direction, the people who lived there circa 1050-1280 AD were anything but ignorant.  The word troglodyte applies because they dwelled in caves carved into the mountain.  There are a number of cave complexes through the region of Colţi, consisting of dwellings, storage spaces, and churches.  In fact, the oldest surviving Eastern Orthodox Church is a cave in Aluniş, dedicated to the Decollation of Saint John the Baptist. 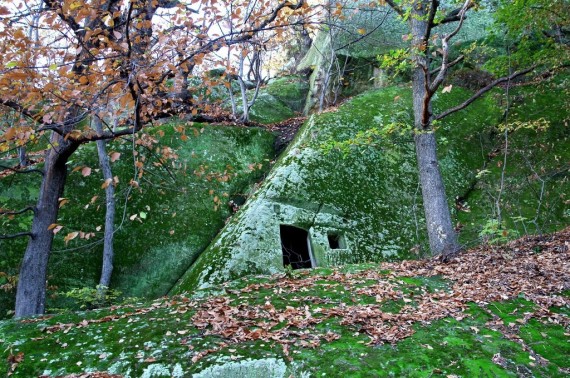 The other reason this ancient community of shepherds can be called troglodytes, is because they were, essentially, hermits.

The earliest inhabitants of these cave communities practised a mystical tradition of prayer from the Eastern Orthodox Church and the Eastern Catholic Churches of Byzantine, known as Hesychasm.  Its literal translation from Greek is ‘to keep the stillness’, and was a form of deep prayer meditation.  You may gather from the definition that Hesychasm requires a certain solitude, and in tradition has been the process of retiring inward by ceasing to register the senses, in order to achieve an experiential knowledge of God.

That, in and of itself, leads to a somewhat isolated existence, but some weren’t content to simply shut the door, as it were.  Some went further.

A man, known as Dionisie Torcatorul (Dionysius the spinner), was the quintessential hermit (a man after my own heart), he was a wool spinner for the village, but he enjoyed his solitude so much, that he carved and created a cave that was so difficult to get to, that he became a myth in his own time.  The entrance to his home, which is now called The Dionisie Torcatorul Cave, is little more than a hole in the rock face some three kilometres (about a mile and a half) from the main village, and about four metres above the ground.  A crude ladder – a replica of which now allows access for tourists – was the only means of entering or exiting the cave, allowing the old hermit the highest level of solitude possible.

Think about that for a moment.  Imagine being more than ten minutes at a running pace from anyone else in the world, surrounded by solid rock and more than 13 feet up a sheer rock face, and that’s how you live, day-in and day-out.  No power, no plumbing, no heat, just you, in a hole, praying.  A lot of people are uncomfortable being without human contact for more than a few hours, though there are probably a few people who read that description and consider it to be heaven on earth, myself included.

Romania itself has no shortage of geological oddities, from the famous mud volcanos, to the living fire fields, to spectacular mountain waterfalls, and what Mother Nature hasn’t done herself, humans have helped along.  There are few places on Earth that have the same concentration of interesting experiences and sights.  And though there are magnificent caves and cave cities all over the world, one can’t help but see something special in these Romanian cave complexes.

“The King’s Mirror” Offers Medieval Forteana at its Finest