“The King’s Mirror” Offers Medieval Forteana at its Finest

In researching the history of strange happenings, Charles Fort is a name that often comes to mind. His prolific research into all things unusual during the early part of the twentieth century became such a staple to the community of followers that would begin promoting his work that his name was, and today still is, often used in reference to it. Hence the term "Forteana" is widely recognized as the field of study that documents strange happenings throughout history.

Fort's chronicling of the unexplained included information dating back well before his time, sometimes documenting such things as the appearances of airships, mystery "rains" of creatures or other organic matter from the sky, curious aerial illuminations, and every other manner of conceivable oddity that anyone took the time to document over the last few centuries. One might ask, however, just how far back historic records of what we might call "Forteana" really goes.

A fine place to start might be a document which, dating back to around 1250, offers what are arguably among the finest in collected Forteana of the Middle Ages. Known as the Konungs skuggsjá, which translates from the Old Norse to mean "King's mirror", is a representation of speculative literature from the era, which was often written in such a way as to present exhaustive data on various subjects, and taking the form of a dialogue between father and son. The King's Mirror is mostly concerning politics, morality, and the state, although as mentioned earlier, there are a number of fascinating things discussed in the treatise that go well beyond the pale of the ordinary. 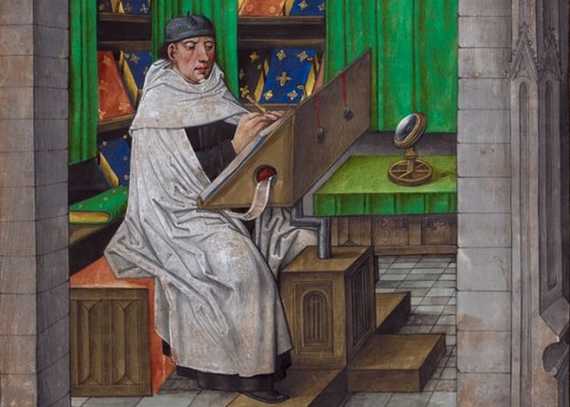 While attributed to Norway, the author of The King's Mirror discusses a number of other countries in it, including Iceland and Ireland, of which a number of natural "wonders" are documented, along with what the author considered miraculous happenings. The following description of a strange creature and its capture is excerpted from the chapter called, “The Natural Wonders of Ireland", documenting an early report that bears remarkable similarity to modern reports of Bigfoot or Sasquatch:

"It once happened in that country (and this seems in-deed strange) that a living creature was caught in the forest as to which no one could say definitely whether it was a man or some other animal; for no one could get a word from it or be sure that it understood human speech. It had the human shape, however, in every detail, both as to hands and face and feet; but the entire body was covered with hair as the beasts are, and down the back it had a long coarse mane like that of a horse, which fell to both sides and trailed along the ground when the creature stooped in walking. I believe I have now recounted most of the marvels that have their origin in the nature of the land itself, so far as we seem to have sure knowledge concerning them."

It is the final entry for this section of The King's Mirror, followed by a new chapter called “Irish Marvels Which Have Miraculous Origins” which bears even more decidedly Fortean fruit. Most remarkable among them, and to an extent that easily warrants the absurd, is the following tale of an "airship" observed above an Irish church:

"There is a church dedicated to the memory of a saint named Kiranus. One Sunday while the populace was at church hearing mass, it befell that an anchor was dropped from the sky as if thrown from a ship; for a rope was attached to it, and one of the flukes of the anchor got caught in the arch above the church door. The people all rushed out of the church and marveled much as their eyes followed the rope upward. They saw a ship with men on board floating before the anchor cable; and soon they saw a man leap overboard and dive down to the anchor as if to release it. The movements of his hands and feet and all his actions appeared like those of a man swimming in the water. When he came down to the anchor, he tried to loosen it, but the people immediately rushed up and attempted to seize him. In this church where the anchor was caught, there is a bishop's throne. The bishop was present when this occurred and forbade his people to hold the man; for, said he, it might prove fatal as when one is held under water. As soon as the man was released, he hurried back up to the ship; and when he was up the crew cut the rope and the ship sailed away out of sight. But the anchor has remained in the church since then as a testimony to this event."

While obviously fantastic in detail, it is worth noting that this tale bears remarkable similarity to stories that would emerge a little more than six centuries later, as fantastic reports of airships began to be reported by newspapers across America. Obviously, the idea of such ships seen drifting through the heavens was nothing new, even as far back as the 1890s. 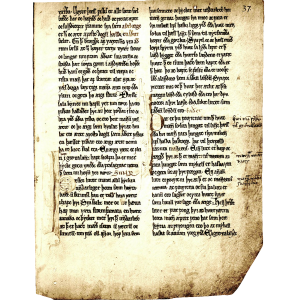 There is some debate among scholars as to where the information about Ireland within The King's Mirror was obtained; it would seem that the general conclusion is that it might have been borrowed from previous works, or more likely, from word of mouth and contemporary legends preserved in oral histories. I have found mention of the the fact that there are poems that detail similar facets as those discussed by the author of The King’s Mirror, specifically those attributed to “The Natural Wonders of Ireland,” though these do not appear to precede the Mirror, and hence probably hadn’t inspired it. The Welsh document known as the Topographia Hibernica did, however, precede the Mirror, and may be the source for some of the Irish legends.

Laurence Larson of the History Department at the University of Illinois provided the following commentary, in the introduction to a published volume featuring the text, titled Scandinavian Monographs, Vol. III:

For all but the two chapters on Ireland the sources of the author's geographical information are evidently the tales of travelers and his own personal experiences; of literary sources there is no trace. The account of the marvels of Ireland, however, gives rise to certain problems. It may be that the Norwegian geographer based these chapters on literary sources that are still extant, or he may have had access to writings which have since disappeared. It is also possible that some of the information was contributed by travelers who sailed the western seas and had sojourned on the " western isles; for it must be remembered that Norway still had colonies as far south as the Isle of Man, and that Norsemen were still living in Ireland, though under English rule. When Hakon IV made his expedition into these regions in 1263, some of these Norwegian colonists in Ireland sought his aid in the hope that English rule might be overthrown.

It has long been known that many of the tales of Irish wonders and miracles that are recounted in the Speculum Regale are also told in the Topographia Hibernica by Giraldus Cambrensis. The famous Welshman wrote his work several decades before the King's Mirror was composed; and it is not impossible that the author of the latter had access to the "Irish Topography."

There are similar legends of fantastic detail referenced in the document that involve mermaids, the kraken, and other such things. Specifically, the portion of the document about the kraken, which is discussed among the various whales and “large fishes” of the Icelandic waters, is an interesting, if not amusing read:

"There is a fish not yet mentioned which it is scarcely advisable to speak about on account of its size, which to most men will seem incredible. There are, moreover, but very few who can tell anything definite about it, inasmuch as it is rarely seen by men; for it almost never approaches the shore or appears where fishermen can see it, and I doubt that this sort of fish is very plentiful in the sea. In our language it is usually called the "kraken." I can say nothing definite as to its length in ells, for on those occasions when men have seen it, it has appeared more like an island than a fish. Nor have I heard that one has ever been caught or found dead. It seems likely that there are but two in all the ocean and that these beget no offspring, for I believe it is always the same ones that appear. Nor would it be well for other fishes if they were as numerous as the other whales, seeing that they are so immense and need so much food. It is said, that when these fishes want something to eat, they are in the habit of giving forth a violent belch, which brings up so much food that all sorts of fish in the neighborhood, both large and small, will rush up in the hope of getting nourishment and good fare. Meanwhile the monster keeps it mouth open, and inasmuch as its opening is about as wide as a sound or fjord, the fishes cannot help crowding in in great numbers. But as soon as its mouth and belly are full, the monster closes its mouth and thus catches and shuts in all the fishes that just previously had rushed in eagerly to seek food."

It is worth noting here the fact that the kraken is described as being more akin to a large fish or whale, rather than a giant squid or octopus, as later mythological representations would depict the monster. And while it is often said whales were themselves the creatures behind such sea monster legends, the author goes into great detail about whales (albeit calling them "fishes") and names the humpback, sperm whale, and numerous other varieties as recognized species apart from this mythical "kraken" monster.

For those who would care to read more of The King’s Mirror, there is a text version available here, courtesy of archive.org, along with various commentaries on its content and authorship.

The mythologies of ancient Europe, considered from a modern Fortean perspective, suggest a far deeper relationship between humanity and certain legends we keep. We might be hard pressed to liken tales of sky ships dropping anchors, or of fishes so large that only he and his mate can inhabit the ocean's waters, to being the stuff of reality (or at very least, realities of the natural world that still existed in 1250). But their almost curious similarity to modern reports of purported "cryptids" and UFO phenomenon are noteworthy, nonetheless.

Russian Scientist Warns Earth May Be in Path of Big Asteroid