This Blinking Mummy is Sicily’s Most Youthful Old Time Resident

The story was a tragedy by all accounts: Mario Lombardo, now a grieving father, couldn’t bear the thought of a life without ever being able to see the face of his beloved child, Rosalia, again. But the girl, whose second birthday celebration would have been in just seven days, had lost her fight against pneumonia, and with it all, Mario had lost his daughter.

It was December 1920, and the body of Rosalia Lombardo would end up being among the last to enter the tunnels of the Capuchin catacombs in Palermo, Sicily, and make the place its afterlife abode. But thanks to the wishes of her father, Rosalia would arguably become its most famous, as well.

If the child’s life couldn’t be saved, Mario thought, perhaps her memory—and even her body—could be preserved. Lombardo approached Alfredo Salafia, a man of repute in the embalming practice, to see whether his daughter’s body could be preserved in a lifelike state, even as it rested in the tunnels of Capuchin.

Salafia had utilized what, at the time, was an innovative chemical technique to eliminate bacteria and other components within the body that would easily breakdown with time. While the body is, today, beginning to show signs of decomposition after nearly a century at rest, the remarkable technique used to preserve Rosalia’s body had long been thought lost, and destined to remain a mystery. 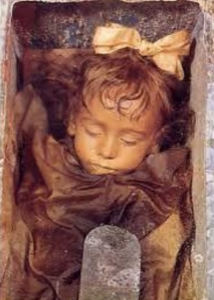 However, decades after Salafia’s death, a secret handwritten memoir the embalmer had kept came to light, and remarkably, in it were his original notes about the formula used in the preservation of Rosalia Lombardo’s body.

Apparently, Rosalia’s body was first drained of blood, along with other practices that are commonplace during the embalming. Even dating back to ancient times, Egyptians would utilize arterial injection of fluids, paired with the blending of oils, spices and fragrant rubs that would be used on the body to ward off against decay. But Salafia’s special method would utilize a slightly different series of ingredients: his was a formalin mixture, “saturated with both zinc sulfate and chloride, and one part of an alcohol solution saturated with salicylic acid.”

This liquid replaced the blood in Rosalia’s body from within, while alcohol and glycerin were applied outside to preserve the body without allowing it to become too dry. To ward off the growth of fungus or bacteria, salicylic acid was also applied, and finally zinc salts were used in order to help the body maintain its form and shape with the passage of time.

Arguably, not even Salafia had known just to what extent his new preservation technique would prove successful; but little Rosalia’s body maintained its lifelike appearance—even curiously so— with the passage of years, and then decades.

Modern examinations of the body show just how well the body has been preserved, with most of the internal organs remaining intact, despite minor discoloration of the skin that has been noted in recent years. To prevent further decay, Rosalia’s body now rests in a hermetically sealed glass enclosure, containing nitrogen gas to help keep the body dry and regress the decay that had begun to appear.

Perhaps most curious among the features of Rosalia’s corpse, however, is the fact that for years vistors to the Capuchin catacombs have noted that the girl’s eyes appear to open and close slowly over time, giving her an even more eerily lifelike appearance. While experts have explained the strange phenomenon some have compared with “blinking” as a mere trick of light, time-lapse footage has even seemed to document the strange illusion, as seen in the series of images below:

And yet, despite this curious aside, Salafia’s handiwork had been plenty enough to cement Rosalia’s fame; with it, he preserved a most tragic story, and the love of a grieving father, for decades to come.