We Now Have No Idea Where Earth’s Water Came From

Earth’s water had to come from somewhere, and conventional wisdom says that it was brought to us in the early days of the solar system by icy comets. Now, new data from the European Space Agency’s Rosetta craft reveals that Comet 67P/Churyumov-Gerasimenko doesn’t have the same kind of water that Earth has. This might not be a big deal—after all, we already know some comets, such as Hartley-2, do have the same kind of water vapor as Earth—but 67P/C-G was chosen in large part because of its similarity to early-solar-system comets, and it’s more likely to have the sort of water those comets would have contained. As Swiss astronomer Kathrin Altwegg put it, this discovery “now probably rule[s] out” the possibility that Earth got its water from comets.  So where did we get it? 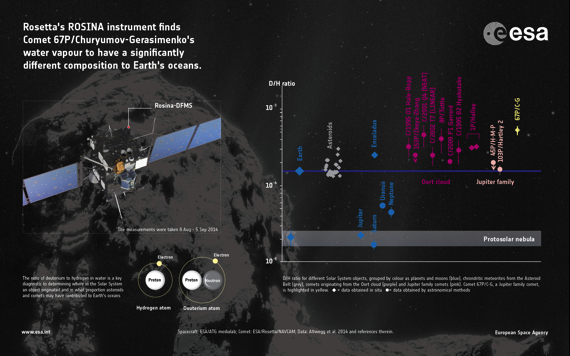 The emerging plan B theory suggests that asteroids gave us our water, which is borne out by the recent discovery that asteroids in general are icier than we’d imagined. This theory is, fortunately, about to be put to the test: asteroid 191955 Bennu, the target of a 2018 joint U.S.-Canadian sample collection mission, was chosen in part because it is (in the words of the mission page) “a time capsule from 4.5 billion years ago.” And now that we’ve learned the comet theory doesn’t hold water, an icy, 4.5-billion-year-old time capsule is exactly what we need.

Tom Head is an author or coauthor of 29 nonfiction books, columnist, scriptwriter, research paralegal, occasional hellraiser, and proud Jackson native. His book Possessions and Exorcisms (Fact or Fiction?) covers the recent demand for exorcists over the past 30 years and demonic possession.