Beware of the Oklahoma Octopus!

Just a few days ago, while doing a late night radio show, I was asked a question that seldom comes my way. It went something like this: "Is there anything you haven't investigated and written a book on, but that you would like to?" Well, there are lots of things which fall into that category, not surprisingly! One of the things that really stands out for me, however, is the weird saga of what has become known as "The Oklahoma Octopus."

It's a deeply strange story that is very much dominated by myth, folklore, and urban legend, but which just might have at its heart a genuine mystery of cryptozoological proportions. It's also a saga on which I have a lot of data, leads, sources, and information, all of which need filtering and investigating in-depth - and all of which, incidentally, I am doing right now for a book project.

The book is a short while away yet, but the basics of the story are there to be found. It  goes like this: in the waters of Lake Thunderbird, Oklahoma, something monstrous and weird is said to dwell. It's described as being octopus-like - hence the memorable moniker the creature now has - and is somewhat akin to a scaled-down version of horror-maestro H. P. Lovecraft's most famous creation, Cthulhu.

In Lovecraft's own words, Cthulhu was: “A monster of vaguely anthropoid outline, but with an octopus-like head whose face was a mass of feelers, a scaly, rubbery-looking body, prodigious claws on hind and fore feet, and long, narrow wings behind.”

The wings aside, that's not a bad description of the Oklahoma Octopus, too! Of course, Cthulhu was merely the product of Lovecraft's weird-but-gifted mind, right? Well...probably. There is, however, a school of thought that believes Lovecraft based at least some of his works on his own, secret knowledge of terrible beasts and of fantastic, lost lands and ancient civilizations. Lovecraft was somewhat familiar with Oklahoma too: he ghost-wrote The Mound, which was focused on dark goings-on in Caddo County, Oklahoma.

And on the subject of Oklahoma...

As noted above, most of the claimed sightings of the Oklahoma Octopus have been reported from within the depths of Lake Thunderbird. This, in itself, is curious, and for three, specific reasons: (A) Lake Thunderbird is a freshwater lake; (B) the lake wasn't built until 1962 (which begs the question: where did the beast come from?) and (C) octopuses live in saltwater environments. Unless, that is, against all the odds an octopus or several have managed to cope with, and adapt to, a freshwater world. 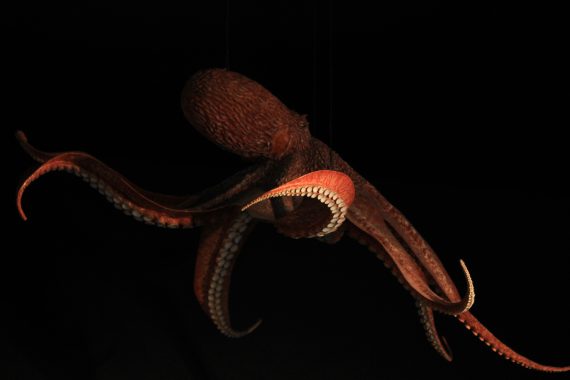 There are other, notable aspects to the story, too: the lake itself is named after another legendary creature of cryptozoological proportions, the Thunderbird, a staple part of Native American lore and history. Plus, the Native Americans that called the area their home centuries ago told stories of monstrous, octopus-like water-beasts in the area way back then - and long before the Oklahoma Octopus was on anyone's radar. The specific locations were the Illinois River (which snakes its way through arts of eastern Oklahoma) and the Verdigris River.

As for the witness reports, they typically revolve around sightings of fairly significantly sized tentacles seen breaking the surface of the lake. Seldom is a complete creature encountered; but there are several such cases which, collectively, still leave the matter wide open.

Of course, this is exactly the kind of case that I like to get my teeth into, and that's precisely what is going on right now. So, in the near future, keep a look out for the full story of what just might be Oklahoma's closest thing to the Loch Ness Monster...

The Highway to Hell