Bringing in Bigfoot With a Blimp Gets a Boost

What does it take to get a blimp off the ground? If it’s a blimp to search from the air for any conclusive evidence of Bigfoot, it needs money, staffing and a credible scientific leader at the helm. The Falcon Project, a program to find Sasquatch that has been struggling to get off the ground, got its scientific leader recently when Dr. Jeff Meldrum, an anatomy and anthropology professor at Idaho State University and well-known Bigfoot expert, officially joined the team as scientific adviser. 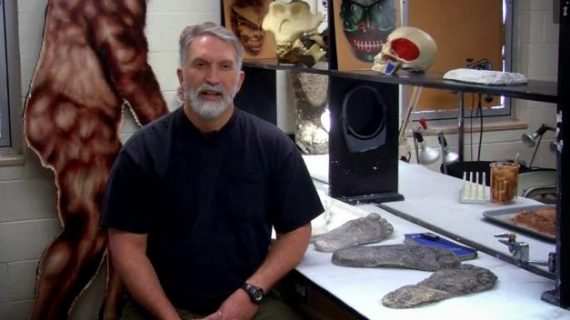 The Falcon Project has been around for a while. It was founded by William Barnes, who had a Sasquatch encounter in California in 1997, with the purpose of finding Bigfoot evidence from the air. The aerial reconnaissance will be performed by the Aurora, a 35-foot dual-cell unmanned airship invented by aeronautical engineer Stephen Barclay that is designed to stay aloft for 10 hours while carrying 75 pounds of thermal imaging and high-definition cameras.

According to the Idaho State Journal, Meldrum says the project will use initially use on-the-ground volunteers, called Sasquatch Trekkers, with tracking, biology, wildlife and military experience.

Establishing the existence of the species based on physical remains is the ultimate goal of the search. Data collected by the Sasquatch Trekkers will establish the foundation for designing the aerial survey strategies utilized in the Falcon Project … and will provide the basis for the deployment of the Aurora airship and placement of the mobile command center and ground teams.

Jeff Meldrum brings credibility to the project and to the fundraising effort after the recent publicity surrounding the controversial Carmine “Tom” Biscardi and his plan to raise $3 million through Bigfoot Project Investments. Meldrum emphasizes that the Falcon Project is a scientific effort, not a business.

The Falcon Project is tapping the crowd sourcing pipeline, in addition to a select few significant and generous benefactors who desire only to be part of this historical exploratory project.

This all sounds promising but will the Bigfoot blimp get off the ground before the enthusiasm is deflated or inflation takes the air out of the funding? That remains to be seen.

Energy-Sucking Vampires on the Rise