Cat Statue on Mars May Be Warning for Stowaway Rodents

Good news for future planet-traveling cat lovers. A photograph taken by the Mars Curiosity Rover shows what looks like a broken statue of a cat on the planet’s surface. Before you say you’re going to wash your hands of this story, Curiosity also took a photo of what looks like a Martian sink.

I’ll admit that my favorite stellar object is Sirius, the Dog Star, but the cat statue caught my eye nonetheless. The formation was first reported on YouTube by poster UFOvni2012. Even without circles or  color enhancements, the stone certainly bears a resemblance to the head of a cat. The other objects are a little more vague, although the one with slots could be some sort of Martian cat litter scooper. 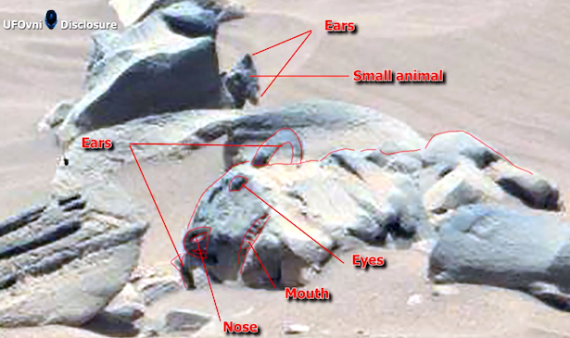 If this is a statue of a Martian cat, what could it mean? Cats have been a big part of human mythology throughout history so it would seem appropriate that ancient space travelers might take their images along or carve them as good luck talismans or as an homage to a feline god. Since rats have spread on Earth as ship stowaways, it might be there to scare away alien rodents. On the other hand, it could also mean that Martians have crazy cat ladies too, especially since this isn’t the first rock formation resembling a cat discovered by Curiosity.

Which brings up another question: is Curiosity somehow being drawn to cats? Could it be some sort of reverse warning? Did Curiosity kill the cat (you knew it was coming)? Maybe that’s what drew Curiosity to the sink – to wash the cat prints off of its robotic arm.

The sink was spotted by Thomas Mikey Jensen in the Sol 776 region and it does look like a sink or a table or possibly a grinding bowl like a Mexican molcajete. Maybe to grind some spices to add to the cat’s food?

Yes, it could also be pareidolia. Whatever it is, Mars is certainly a treasure trove of these oddities.

Alchemy and the Men in Black