Eggshell World Globe Might be the First to Depict The Americas

So there’s been something of a theme to my work of late; my research notes would have you believe that I’ve become a cartophile – that is, a lover of maps (not to be confused with a lover of baseball cards).  I admit, I do love maps.  Especially antique maps, ancient maps.  But it’s more of a passing fancy than an obsession, though I’m about to make that a little less believable.

I’ve brought you the story of ancient celestial spheres, also known as Islamacate Spheres.  I’ve discussed the peculiarities of famous maps out of antiquity, such as the Piri Reis and the Dulcert 1339 maps.  I’ve even examined the case for early Greek celestial knowledge through rudimentary star maps on pottery.  I’ve shared with you all the various forms of maps, from portolan charts, to globes, to celestial spheres and everything in between.

Today though… today I bring you ostrich eggs.  Or more accurately, antique maps etched onto the preserved shells of ostrich eggs.  One particular example may in fact be the oldest surviving globe to show the New World. 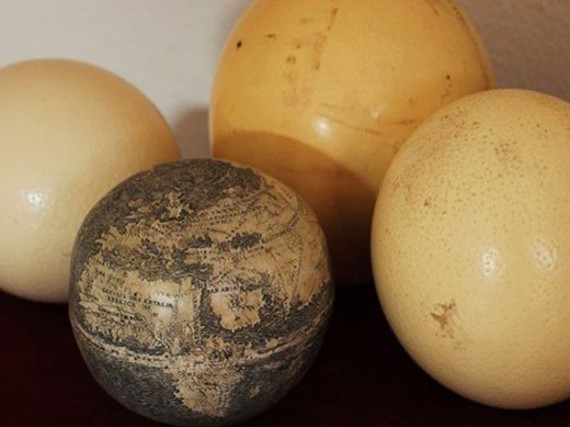 Map makers, or cartographers, have been making maps for millennia, and while most surviving examples are either drawn on vellum or delicate parchment, the more creative among the tradition have used all kinds of materials in their art, from petrified wood, to bone, to ivory.  You name it, someone at some point has used it to make a map.

Globes have typically been made of some kind of metal, such as bronze, or copper, or even precious metals.  Often they’re cast models on which their maker carves his marks and titles and locations.  It’s painstaking work, and the results are often incredibly beautiful.  In the case of ostrich egg globes, the delicate nature of the eggshell and the size of the detail make them not only extremely rare, but equally impressive.  Artists today have produced stunning works of art on the surface of eggs, but the delicate nature of the medium makes it even more extraordinary that any eggshell globes have survived at all.

The pictured example was found at a London map fair in 2012, and eventually found its way into the hands of a Belgian map collector named Stefaan Missinne.  Aside from being a most beautiful and rare antique oddity, it wasn’t thought to be particularly important, until Missinne started his year-long study.

Having been a hidden gem in an anonymous collector’s holdings, Missinne was shocked to find that this globe could in fact be the oldest surviving world globe to depict the Americas.  According to a paper submitted to the journal The Portolan (of the Washington Map Society) by Missinne, the ostrich egg globe is a near perfect duplicate of the now famous Hunt-Lenox Globe, a copper terrestrial globe that has held that title since about 1870.[1]

With a not dissimilar story of discovery, the Hunt-Lenox Globe has been dated to c. 1510 AD, and is now a center piece of the New York Public Library’s Rare Books Division collection.  Both globes show the Americas (both north and south) as small islands in the far west Atlantic Ocean, but even with this glaring inaccuracy, it’s held that they are the first representations of the New World on a globe of any kind.  Thought there are portolan charts with these details that predate the globes by several decades.

This eggshell globe, though, does have a curious feature not seen on the Hunt-Lenox Globe.  According to Missinne, it is the very first map of any kind to show Newfoundland.

The ostrich egg globe, which as yet does not have a name, has been dated to 1502-1508, and this leads some to believe that the egg was used as the design model for the Hunt-Lenox Globe.  Interestingly, the ostrich egg globe was dated by comparing the density of calcium contained in the eggshell to that of newer eggs of known age.  Unfortunately, the eggshell globe is likely to remain officially uncrowned as the first to show the New World, since its provenance is entirely unknown prior to 2012.  Missinne and his colleagues have been able to date the eggshell, and their analysis is reliable, but the eggshell could be much older than the carvings, which means anyone could have created the globe at some point since 1510 up until it was found in London.

If you are at all familiar with cartographic history, dating these globes to the early 16th century should be no surprise.  It seems that there was something of a boon in the trade of map making during that period, and several examples of maps dating to between 1450-1580 show remarkable progress in the knowledge and skill of these craftsmen, as well as general knowledge of the world at large.  This was, in fact, the height of the Renaissance period, where the genius of men like Leonardo da Vinci was being recognised and shared among scholars, and the dark ages finally gave way to the modern era.  Missinne, strangely enough, actually attempts to attribute this eggshell globe to The Master himself, though few scholars agree that da Vinci had anything to do with it.

These surviving examples of the genius and skill of our forbearers are a testament to what humanity can achieve.  There was a new world out there, and the adventure of exploring and discovering the unknown was a powerful force.  But one didn’t need to be Christopher Columbus to satisfy that urge, cartographers, surveyors, and artisans all played their part.  Without the makers of these wondrous oddities, we might not have gotten to where we are quite so fast.

That same spirit of exploration can still be felt, though it isn’t as conspicuous as it once was.  Those on the front lines of scientific discovery, no matter the field, are the true adventurers of our time.