If you’re looking for a scary sea serpent-like creature to star in your next “Monster That Ate New York” movie, you can’t go wrong with the prehistoric creature caught recently off the south-eastern coast of Victoria, Australia, that has a mouth full of 300 razor sharp teeth in 25 rows just waiting to scare some money out of the tooth fairy before swallowing it whole

The bizarre creature is called a frilled shark, named for its six pairs of frill-like gills. It’s also known as the “living fossil” because of its prehistoric features that resemble an eel or serpent more than a shark. The species (Chlamydoselachus anguineus) is known but has rarely if ever been seen alive, so this was truly an exciting find.

It was caught by David Guillot, skipper of the trawler Western Alliance, in waters near Lakes Entrance at a depth of 700 meters. He had no idea what it was, but he knew it shouldn’t be messed with.

The head on it was like something out of a horror movie. It was quite horrific looking ... It was quite scary actually. When one of the deckhands went to pick it up by its tail, its ability to turn back on itself quite sharply was something I hadn't seen before either.

The two-meter-long shark was turned over by the crew to the Commonwealth Scientific and Industrial Research Organization (CSIRO) which confirmed it was a frilled shark. No one with CSIRO or the South East Trawl Fishing Association could recall ever seeing one alive.

Frilled sharks resemble eels and could easily be mistaken for a small sea serpent. The long jaws open wide so they can consume prey whole and the rows of teeth keep the unlucky meal from wiggling out of its mouth. It’s believed they eat cephalopods, bony fish and smaller sharks.

The species was first discovered around 1880 and sightings have been rare. Before you breath a sigh of relief, their range is worldwide, with evidence of their existence found in both the Atlantic and Pacific Oceans along the coasts of northern Norway, northern Scotland, western Ireland, France, Morocco, Brazil, Chile, West Africa, Japan, Australia, New Zealand and the U.S. coastal areas of New England and California.

Before you go looking for one for your wall or plate, the frilled shark is listed as near-threatened and probably tastes as bad as it looks. 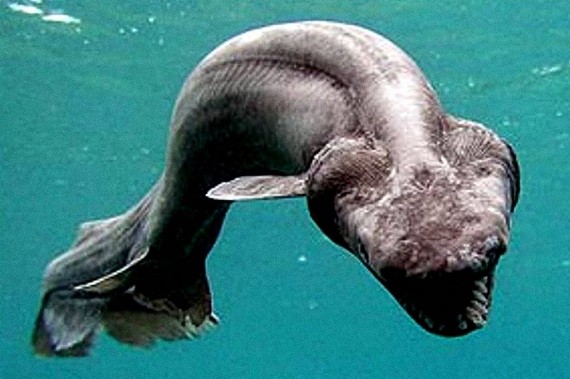