Is literal time-travel - into the past and/or the future, and then back to the present - actually feasible? The answer to that question is: it really depends on who you ask. In short, this translates to: no-one actually knows. But, there is something on this matter that I want to bring to your attention and which may shed at least some light on the matter.

On the other hand, you might find yourself even more confused, after reading what I have to say. And, with that all said and done, read on...

A particular fungus, one that can provoke remarkable experiences in an individual who partakes of it, Amanita muscaria is also known as the sacred mushroom. It was back in the 1950s that one Andrija Puharich – an American of Yugoslavian descent – delved deeply into the mind-altering abilities of this fungus from his lab in Glen Cove, Maine.

Andrija Puharich was someone who knew a great deal about how the mind could be manipulated: from 1953 to 1955, and as a Captain in the U.S. Army, he was attached to the military’s Army Chemical Center, Maryland. His work there spilled over into certain realms also being explored by the CIA, and which ultimately became part and parcel of the work undertaken by the agency’s “mind-control” program, MKUltra.

It turns out that Puharich was someone who had a fascination for the mysteries of ancient Egypt, and who also came to suspect that Amanita muscaria might allow the participant’s essence, or soul, to leave their body and, quite literally, to time-travel – in astral form – into the distant past.

A theory that, in many ways, is even more thought-provoking, suggests that rather than allowing the experiencer to travel into the very heart of millennia long gone, Amanita muscaria actually provokes the surfacing of long-buried, encoded memories passed down from generation to generation, and possibly from time immemorial. 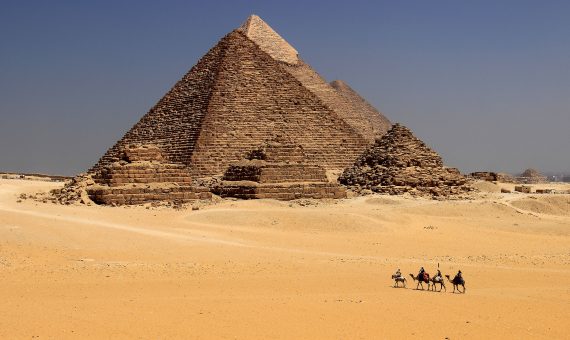 It so transpires that both scenarios fascinated the scientific figures of the CIA – to the extent that, at some point in March 1956, an individual whose name is blacked out in the heavily redacted files that have been released via the Freedom of Information Act, was rendered into an altered state by Amanita muscaria and carefully monitored to determine the effects on the subject.

The man – who was able to consciously recall the events after the effects wore off, and who shared the details with CIA personnel – suddenly found himself plunged into the heart of ancient Egypt. He saw nothing less than squadrons of gleaming, extraterrestrial flying saucers, massive in size, and raising equally massive stone blocks into the air, and essentially, using a form of advanced levitation to construct the pyramids at Giza.

The files reveal that the people attached to the project – which was a sub-project of the overall MKUltra umbrella – were in no less three minds as to what the experience told them. Some of the doctors and scientists believed that the man had experienced nothing stranger than a vivid hallucination, possibly provoked by the fact that he had earlier and fairly extensive contact with Puharich, and, therefore, may have been unintentionally influenced by the latter's beliefs and conclusions.

Rather astonishingly, two of the team concluded that...(drum roll)...the man’s soul had literally surfed time and had stumbled upon the secret of how the Pyramids at Giza, Egypt were built. Then there was the theory that what the man experienced was none other than the spontaneous surfacing of deeply buried, inherited memories from times and ancestors long gone. Memories that, for the most part, remain latent and untapped, until something like Amanita muscaria opens the door, so to speak.

An early example of time-travel? I really don't know. Shame there was no reference in the file to flux capacitors. If there had been, we might really have the answer...