You’ve downloaded the “Jaws” theme, put on some flippers, filled the bathtub and fixed yourself a plate of chum. Now all you need to feel like a real shark is a helmet that helps you see like one. Good news – a couple of Irish artists have your hammerhead covered.

Anne Cleary and Denis Connolly call themselves Cleary Connolly and their innovative headgear “Meta-Perceptual Helmets.” Their collection of helmets made its debut at the National Museum of Ireland in November and are currently on display at the Centre Culturel Irlandais in Paris. Visitors can try on the helmets and see the world the way hammerhead sharks, giraffes, horses and chameleons see it.

The idea for the Meta-Perceptual Helmets came from research done in the early 1900s by psychologist George M. Stratton. Stratton conducted an experiment where he wore special glasses that inverted his vision up and down and left and right. After a week, he discovered that his brain adapted to the visual reversals and he could function normally.

Mirrors inside the Meta-Perceptual Helmets and movable parts allow humans to see like the animals. The hammerhead helmet lets the wearer see 360 degrees except for a blind spot right in the center of its vision, which is resolved by swinging the head from side to side like hammerheads do. The chameleon helmet has independently-rotational eyes like the lizard which allow the user to look at two objects at the same time. The giraffe helmet puts the eyes above the helmet while the horse helmet lets the user see what’s coming from behind. For fun, they also have Cheshire Cat and Cyclops helmets.

The helmets illustrate just how limited human vision is in comparison to these animals. Cleary Connolly explains what happens when you put one on:

Wearing the helmets, the visitor becomes a hybrid creature himself, part human, part machine, part animal, but also: part work of art; a work of art that challenges those who contemplate the helmet - from the inside or from the outside - to take a new perspective on the world.

I wonder if the lizard helmet would improve my ability to swat flies. 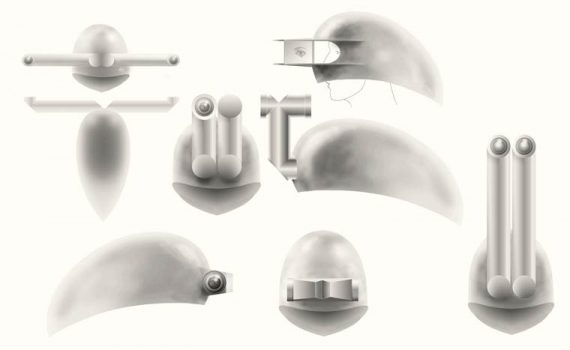 Mythical Metal of Atlantis May Have Been Found