“Why did we do that to Pluto? We had it good with Pluto.” — Dave Eggers

It is also the only planet among the original nine that we’ve never actually seen; it is so small and so far away that our best equipment shows it only as a smudge (skip ahead to 2010 below if you’re curious), and no spacecraft has gotten close enough to snap a picture. All detailed renderings of Pluto that you’ve seen are the product of human imagination. This will change in July 2015, when NASA’s New Horizons probe will give us our first clear images of the dwarf planet. What will those images look like? We can only speculate.

But Pluto is no stranger to our speculation. 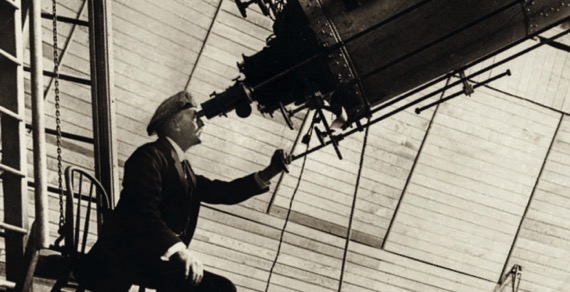 The great astronomer Percival Lowell was correct that there was a ninth planet (as his generation would have undeniably called Pluto a planet), and in that sense he is often credited for predicting the discovery of Pluto, but the planet he expected to discover bore little resemblance to the dwarf planet we’ve come to know. Lowell predicted a much larger or closer planet, one that would have affected the orbit of Neptune—and astronomers later explained this discrepancy in the calculation of Neptune’s orbit, which Lowell attributed to the gravitational force of a ninth planet, when they recalculated Neptune’s mass and discovered that it was lighter than astronomers had initially predicted.

But there are reasons to give Lowell credit as a forerunner to the discovery of Pluto, not least among them being that he had unwittingly photographed Pluto while searching for his Planet X (though Pluto appeared only as a dim spot in these photographs and did not capture Lowell’s attention). Because he died of a stroke in 1916, still searching feverishly for his ninth planet, the imminent discovery of Pluto was widely seen as his vindication.

It was at Percival Lowell’s own observatory, then and subsequently known as Lowell Observatory, that an impoverished young astronomer named Clyde W. Tombaugh discovered a mysterious Planet X on 18 February 1930. Tombaugh, who had not yet graduated from college and received little formal training in astronomy, would go on to a long and distinguished career and countless other discoveries, though none as famous as Pluto. He was still active in 1992 when a NASA scientist asked him, tongue in cheek, for permission to plan the New Horizons mission.

But in 1930 he was just an overachieving, uneducated nerd in his early twenties, and he worked alone for room and board, painstakingly operating the Observatory's massive, clumsy camera equipment and then sorting through the photographic plates it produced for hours on end. It was in comparing these plates that he noticed a dim spot that, if followed from plate to plate, moved in the unmistakable pattern of an elliptical orbit. Through hard work and persistence, Tombaugh had accomplished Lowell’s dream: he had discovered a ninth planet.

But he didn’t know what to call the thing. “Planet X” is fine for a hypothetical planet, but a little silly when you’re describing something you’ve already found. Tombaugh fielded possible names, and it was an 11-year-old English girl named Venetia Burney who suggested that, given that the planet is cold and nearly invisible, naming it after the Greek god of death and the underworld was entirely appropriate. And the fact that the first two letters of Pluto were PL—the initials of Percival Lowell—was no coincidence.

1931: The Abominations of Yuggoth

Unlike Mars, Pluto has never been an especially common proposed habitat for extraterrestrial life—but the fact that it isn’t common doesn’t make it uninteresting. The horror novelist H.P. Lovecraft was working on a short story titled “The Whisperer in Darkness” when he heard about the discovery of Pluto, prompting him to suggest the story’s villains, an ancient race known as the Mi-go (“the Abominable Ones”), used Pluto (or “Yuggoth,” as they preferred to call it) as their home base. After all, Pluto is cold, nearly invisible, and drifting about in the dark and unfathomably remote depths of space; can you think of a more logical place for a race of Lovecraftian monsters to live?

Despite their shared affinity for giant talking animals, H.P. Lovecraft and Walt Disney aren’t generally noted for having similar creative approaches—but both were inspired, in different ways, by the discovery of Pluto. In Lovecraft’s case, it became the habitat of an evil alien species. In Disney’s, it became the name of Mickey Mouse’s dog. Pluto made his debut as Minnie’s dog “Rover” in 1930’s The Chain Gang, became Mickey’s dog (now called Pluto) in 1931’s The Moose Hunt, and was finally featured in his own cartoon in 1932’s Just Dogs (above).

The Fourth Doctor took on the shapeshifting corporate Usurians in the delightfully campy 1977 Doctor Who serial “The Sun Makers,” liberating the surviving human population from forced labor on Pluto and bringing them back to Earth. During Doctor Who’s more than 50-year history Pluto has also played host to a number of other unusual creatures, ranging from flesh-eating microorganisms to living shadows. 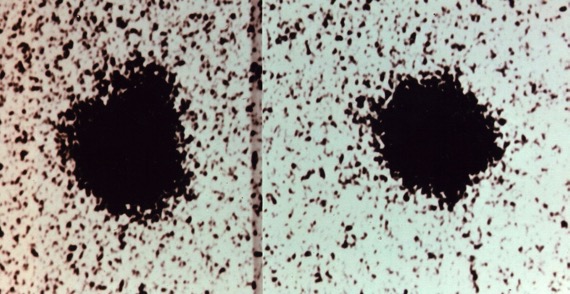 Pluto and Charon are so similar in size and so linked in their movements that they’re more often treated as a binary system than a planet with a moon, which makes it hard to imagine that less than four decades ago, we didn’t even know Charon existed. Blame it on poor-quality instruments that were initially unable to capture sunlight reflecting off of Charon’s surface, rendering it invisible.

These two reflector photographs of Pluto from 1978 were the first to clearly show Pluto’s moon—not as a distinct object but rather as a bump, or protrusion, that moves depending on its location in orbit; it appears in the upper right in the left photo, and in the lower right in the right photo. It is only in recent years that we’ve been able to see Charon as a distinct object, and although we haven’t been able to determine much about its surface features we’ve been able to extrapolate a few things about it, even at this distance. Early indications suggest that it may even have, or have had, an underground ocean capable of supporting life.

Wispy gas is the least visible form of matter, so it stands to reason that we’ll have a little trouble confirming that a planet we can barely see has an atmosphere. NASA first confirmed that Pluto has a thin nitrogen atmosphere in 1988, an atmosphere that appears to have expanded rapidly in subsequent decades. How and why? We don’t know yet.

The British composer Gustav Holst completed his seven-part suite The Planets (Op. 32) in 1916, fourteen years before Pluto’s discovery. While he was still active in 1930, his schedule was so packed that he didn’t have time to add an eighth movement for the new planet, and his unexpected death four years later removed any possibility that he would ever expand his masterpiece to include Pluto.

The Planets remained a seven-part suite until 70 years later, when Holst scholar Colin Matthews was asked to formally add an eighth movement to the suite. He titled it “Pluto, the Renewer” and dedicated it to the memory of Holst’s daughter, and it is generally performed alongside the other seven movements to this day. 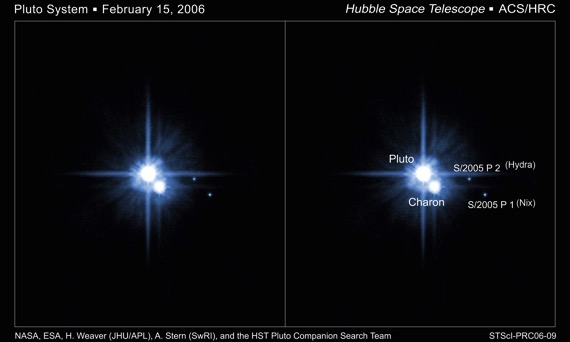 The Hubble Space Telescope was the first instrument powerful enough to clearly distinguish Pluto from Charon, but when astronomers turned its lens to the ninth planet they were in for a shock: Pluto had more than one moon. S/2005P1 and S/2005P2, later identified as Hydra and Nix, are much smaller than Charon and much more difficult to spot—but they raised the total number of Plutonian moons to three, giving it as many moons as the first four planets in the solar system combined. That’s quite an achievement for a tiny planet, but within a decade the number would grow even more. 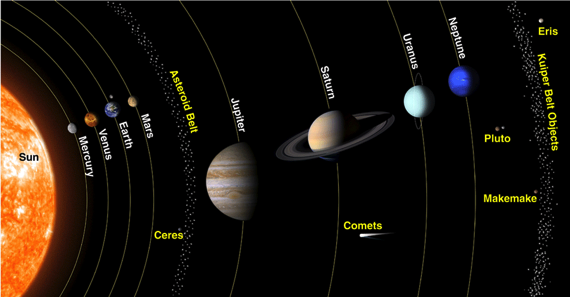 In 2006, astronomers were confronted with a new problem: the discovery of new small planets threatened to expand the number of planets in our solar system from nine to, well, eventually 300 or so. And most of these planets would be very small objects located in the outer solar system. That’s a pretty unwieldy system of classification.

Scientists solved the problem by adding a new criterion to the definition of a classical planet—it has to have enough mass to clear other objects out of its orbit—which meant that the newly-discovered small planets (and the hundreds more to follow) weren’t really planets after all. Unfortunately, this new definition also excludes Pluto. Ceres, Pluto, Makemake, and Eris are now classified as dwarf planets, and the number of classical planets has gone down from nine to eight.

That said, Pluto is still a planet of sorts—it’s just a dwarf planet rather than a classical planet. And that distinction may actually fade over time if the hundreds of expected Kuiper Belt dwarf planets fail to materialize. 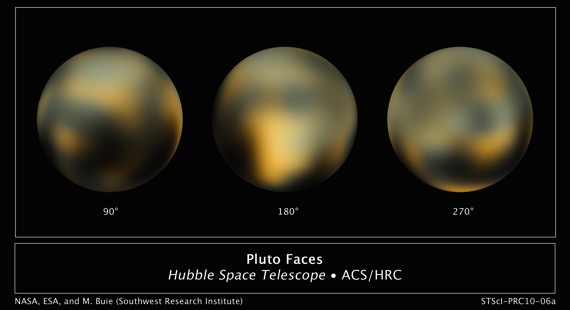 It may be hard to believe, but this photo—taken by the Hubble Space Telescope in 2010—is the best picture we have ever managed to obtain of Pluto. It’s fuzzy as heck, and you can’t really make out any of the surface features, but at least some general shapes are beginning to emerge. Before Hubble, Pluto was just a dot. All of the magnificent images of Pluto that you’ve grown up seeing are just artist’s renderings; the real thing is still invisible to us for now. But all of that will change very soon. 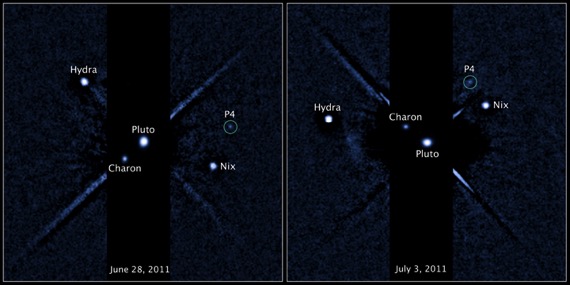 Pluto’s status as a dwarf planet didn’t do anything to impede its remarkable ability to attract moons. Using the Hubble Space Telescope, astronomers discovered a fourth, P4 (later named Kerberos), in 2011. 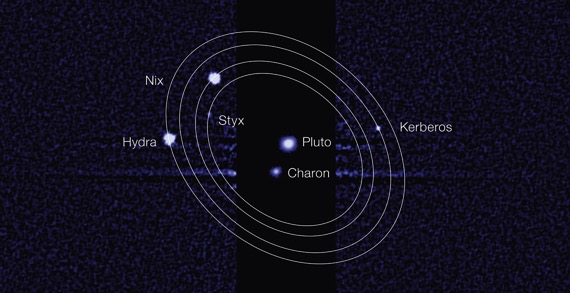 After the discovery of P5/Styx in 2012, Pluto was known to have five moons. Will the number increase further? Very possibly, because... 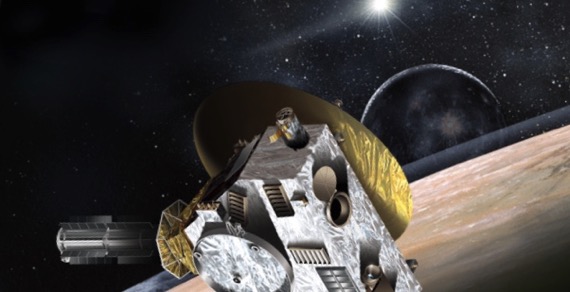 …in July 2015, thanks to NASA’s New Horizons probe, we’re going to get our first close look at Pluto, ever. Real, full-color, high-resolution photographs of the planet and all of its moons—including any we haven’t discovered yet.

It’s going to be wonderful. And it’s going to tell us things about the former ninth planet that we never even began to suspect, things that Percival Lowell never had the opportunity to imagine, things that Clyde Tombaugh will never be able to see.

“Ah, but a man’s reach should exceed his grasp,” Robert Browning wrote, “or what’s a heaven for?” And that’s what Pluto, the planet named after the god of the dead, so perfectly represents: the remote and invisible future which we, the future's earliest fumbling discoverers, can dream about but never conquer.

Tom Head is an author or coauthor of 29 nonfiction books, columnist, scriptwriter, research paralegal, occasional hellraiser, and proud Jackson native. His book Possessions and Exorcisms (Fact or Fiction?) covers the recent demand for exorcists over the past 30 years and demonic possession.

French Nuclear Director Says UFO Was Over His Plant