Like so many other villages in the ancient county of Devon, England, Widecombe-in-the-Moor has a curious history attached to it. On October 21, 1638, the village church, St. Pancras, was badly damaged by a lightning strike that killed four people and injured sixty-two. It transpires that there is far more than initially meets the eye with respect to this particular lightning strike.

At the time of its occurrence, the clergyman was one George Lyde, who was born at Berry Pomeroy in 1601, and who was standing in the pulpit when the lightning struck. Fortunately, he narrowly avoided serious injury – if not death, even.

Interestingly, although at the time the event was seen as the work of the Devil, there's a school of thought that suggests the event was caused by that rare aerial phenomenon known as ball-lightning.

Indeed, the phenomenon that led to both death and severe injury in the church was said to have been provoked by nothing less than a "great ball of fire." Goodness gracious...

"Vpon Sunday the 21. of October last, In the Parish Church of Withycombe in Devonshire neare Dartmoores, fell in time of Divine Service a strange darkenesse, increasing more and more, so that the people there assembled could not see to reade in any booke, and suddenly in a fearefull and lamentable manner, a mighty thundering was heard...

"...the ratling whereof did answer much like unto the sound and report of many great Cannons, and terrible strange lightening therewith, greatly amazing and astonishing those that heard and saw it, the darkenesse increasing yet more, till they could not (in the interim) see one another; the extraordinarie lightning came into the Church so flaming, that the whole Church was presently filled with fire and smoke, the smell whereof was very loathsome, much like unto the sent of brimstone...

"...some said they saw at first a great ball of fire come in at the window and passe thorough the Church, which so much affrighted the whole Congregation that the most part of them fell downe into their seates, and some upon their knees, some on their faces, and some one upon another, with a great cry of burning and scalding, they all giving up themselves for dead." 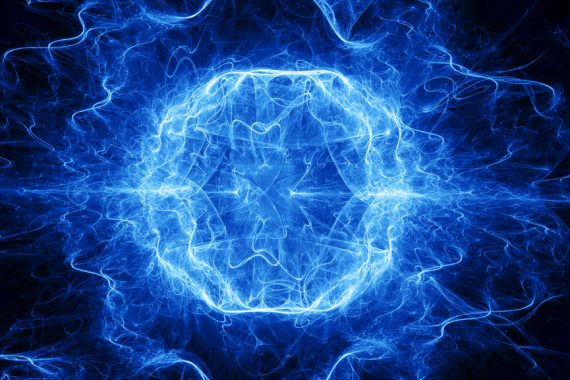 Strangely enough, this event had eerie parallels with a very similar incident at St. Mary's Church, Bungay, Suffolk, England, on Sunday 4 August 1577, when an immense, spectral, fiery-eyed black hound materialized within the church during a powerful thunderstorm and mercilessly tore into the terrified congregation with its huge fangs and claws.

So powerful was the storm that it reportedly killed two men in the belfry as the church tower received an immense lightning bolt that tore through it and shook the building to its very foundations.

According to an old, local verse: "All down the church in midst of fire, the hellish monster flew. And, passing onward to the quire, he many people slew."

Then as suddenly as it had appeared, the beast bounded out of St. Mary’s and was reported shortly thereafter at Blythburgh Church, about twelve miles away, where it killed and mauled even more people with its immense and bone-crushing jaws – and where, it is said, the scorch marks of the beast’s claws can still be seen imprinted on the ancient door of the church.

I have no idea, but I do have one final thing to add. In the early summer of 2001, I was actually in the village of Widecombe-in-the-Moor for an entirely different (but equally odd) reason, namely to arrange an interview with an elderly doctor who claimed knowledge of a so-called "hairy wildman" seen roaming around the county back in the 1940s!

Truly, our world is a weird one!

Roswell UFO: Don’t Be A Dummy