As much as we have explored our planet and cataloged the myriad forms of life that inhabit it, there are still mysteries that have managed to remain largely hidden from the gaze of mankind. From lost forest worlds to underground lakes in Antarctica, to deep sea abysses, our planet manages to continually surprise and tantalize us with its seemingly endless enigmas and new, awe inspiring realms we have only just begun to understand. One such place lies on, or rather under, Palawan Island in the Philippines, one of the most pristine tropical islands in the world. Here beneath the sunbathing tourists, majestic mountains, and white sand beaches of this island paradise meanders one of the wonders of the natural world; one of the longest and most mysterious underground river systems in the world.

Palawan Island is about as close to a postcard picture perfect island paradise as you’re likely to find. The largest island of Palawan Province and the fifth largest in the Philippines, Palawan Island has nevertheless remained one of the least developed and sparsely inhabited. Verdant jungle mountains, pristine, ancient virgin wilderness brimming with wildlife, and unspoiled white sand beaches are par for the course here. The island boasts one of the most stunning arrays of biodiversity to be found in the Philipines and indeed the world, and it has often ended up on lists of the best island getaways for years. Palawan also has the distinction of being ranked as a Biosphere Reserve and holds one of the most intriguing UNESCO World Heritage Sites there is; the stunningly surreal and beautiful underground river and cave system of the Cabayugan River.

Within the Saint Paul Mountain range lies Puerto-Princesa Subterranean River National Park, which is located north-west of Puerto Princesa, the capital of Palawan Province. The park is dominated by a striking landscape comprised of around 90% karst limestone ridges, peaks, cliffs, pinnacles, and shafts that meander along the west coast of Palawan Island. Much of the park is heavily forested with various species of hardwood trees, and the coastal area is lush with mangrove forests and colorful coral reefs. Even the steep limestone formations hold vegetation that hangs precariously from ledges and cliffs. Beneath this rugged terrain of forest and jagged limestone sprawls a vast underground cave system that is 24km (15 miles) long. It is through this cave system that the Cabayugan River passes; beginning around 2km south-west of Mount Saint Paul and flowing for around 8.2 km (around 5 miles) underground through spacious subterranean chambers and caves to end its journey at an outlet into St. Paul’s Bay in the South China Sea.

The underground Cabayugan river long remained hidden from the Western world and was once held a mythical status, the only evidence of it being the stories and rumors of the native people of the island. In 1898, the American Zoologist Dean C. Worcester spent a good deal of time studying the fauna of Palawan and made mention of the mysterious river, saying, “If accounts are to be believed, of a lake opening to the sea by a subterranean river.”

Considering that the entrance to the system is a small opening in a cliff half submerged by a lagoon surrounded by thick trees and subject to the rising and falling tides, it is perhaps no wonder the Cabayugan River remained hidden from the modern world for so long. Of course, it did turn out there was just such a river, and a truly unique and breathtaking one at that. The longest navigable completely underground river in the world, the entire 5 mile length of the river system winds through dramatic subterranean realms of soaring stalactites and stalagmites, vast cave chambers measuring up to 60 meters high, and dark tunnels leading off into the unseen murk beyond. Many of the stalactites and stalagmites here shimmer with glimmering water crystals formed by eons of precipitation and erosion, sometimes giving the impression of being a forest of crystalized trees. Along the way, the river branches off into smaller tributaries that snake off into the darkness.

This underground cave and river system and its surrounding environs are home to a variety of organisms, many of which are considered to be endangered species and some of which are rather unique. Within the caves and chambers one can find large numbers of cave swiftlets; unique birds which navigate the darkness using sonar like bats and use their unique glue-like saliva to stick to walls and fashion nests. There are also millions of flitting hordes of bats representing 8 different species, as well as numerous species of cave crickets and other invertebrates, and reptiles such as lizards and snakes. Within the river’s waters one can find a variety of species of fish, shrimps, and other crustaceans.

The extent and diversity of the fauna of the underground cave and river system of Puerto-Princesa Subterranean River National Park is still little understood. The mostly unexplored caves sprawl for miles, with countless chambers, offshoots, caverns, and tunnels, and the river has many smaller streams branching out into the darkness. It is almost a certainty that new species lurk somewhere within, some perhaps beyond our wildest imaginings. Locals tell tales of all manner of mysterious cave denizens, such as giant lizards, strange dwarf-like humanoid beings, and various aquatic beasts such as mermaids and sea serpents prowling the river’s waters. Is there any grain of truth to these accounts? What might we find in this lost land deep under the earth? 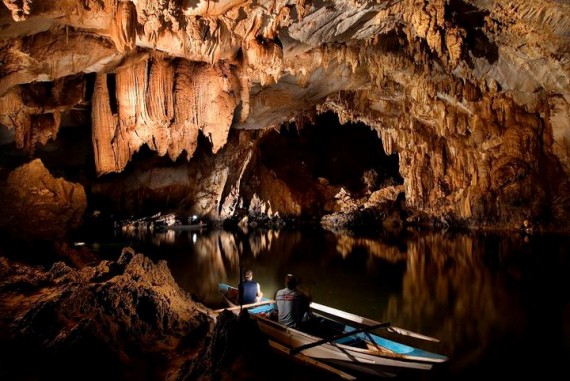 Already there have been strange findings within the subterranean river system, with the discovery of a fossilized Sirenia, a type of prehistoric sea cow which lived around 20 million years ago in the Miocene Age, embedded in the cave walls. The finding is quite unusual for several reasons. Although dugongs, which are similar to what a Sirenia would have been like, are occasionally known in the coastal areas where the river exits to the sea, they are not known to travel at all into the underground river itself. How did this Sirenia wind up here? In addition, the finding is doubly strange because Sirenia were only thought to have been found in Europe, the Mediterranean and Africa, making one on Palawan Island in the Philippines quite out of place indeed.

In recent years as more people have become aware of the existence of this magical place, tours of the underground cave and river system of Puerto-Princesa Subterranean River National Park have become more popular, and it is even possible to get a look at the fossil, although it is difficult to go there and a special permit is required. Once underground on the river, the amount of access granted to the public is limited, but it is still possible to get a feeling for the haunting grandeur of this unique, surreal domain of soaring cave chambers and crystal rock formations.

With its sun soaked beaches and gorgeous scenery, Palawan Island is a tropical paradise for tourists from all over the world, yet it is what lies underground that makes this place truly a treasure. As people hike the trails and enjoy themselves above ground, below ground the Cabayugan River flows hidden from sight as it has for millions of years and will for millions more.

Pancakes From The Stars