Who Built The Mysterious Pyramid of the French Riviera?

Along the French Riviera, close to the town of Falicon, stands one of the most curious monuments found anywhere in Europe.

Built from small, roughly-shapen limestone slabs, a topless, ruined pyramid can be seen rising amidst the foliage on the hill of Mont Chauve just outside Nice. The strange ruins, portions of which were likely removed over the years for use in the construction of homes nearby, sits directly over the entrance to a cave, known locally as la bauma die ratapignata (The Cave of the Bats), which may once have been sealed off with a heavy door or other fabricated entrance.

One might ask what is truly so “strange” or mysterious about this ancient pyramid, which, in truth, rather than having been built by Roman occultists practicing the ancient ways of Egypt, in likelihood dates back to the early or middle part of the nineteenth century. Artist Dante Gabriel Rossetti had, in fact, written about the karstic cave beneath the site in around 1803, but had made no mention of the idyllic structure (that is, in the sense of being picturesque) which sits above. Numerous tour guides of the region do list the site, however, dating back to the middle 19th century.

Indeed, the exact origins of the pyramid remain unknown, along with any purpose it may have served. By its remains, it seems evident that it had been built in much the same fashion as the pyramids of Egypt. Deeper within the mystery cave below, the remnants of stairs can be found, although descent to such levels today requires the use of caving equipment.

There is said to be a similar pyramid that exists near the middle of Southern France in the Massif Central, a mountainous elevated region which also contains the Auvergne Volcanoes National Park, which contains  the Puy de Dôme, the highest volcano in what is called the Chaine des Puys. However, due to the geology of the region, it may be possible that there is a natural feature existing in the latter location (as pictured below) which could resemble a pyramid. 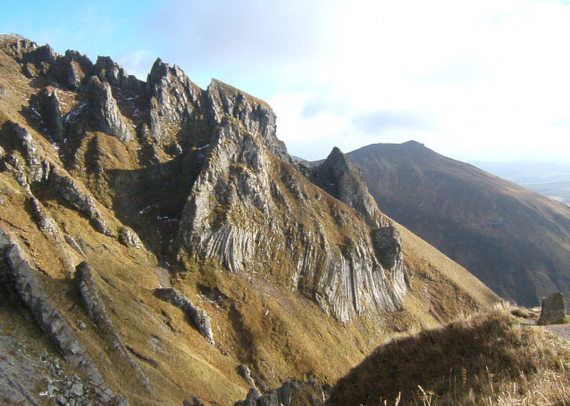 Was the site built, as some have suggested, as a tribute to the cult of Mithras? It is true that the number of steps situated within the grotto match the seven-level initiation of the Mithra practice, which had purportedly been popular among the Roman Army (though this would argue against the seemingly indisputable age of the pyramid, which does seem to be of modern construction). Other theories are that there may have been a connection to the Templars, though again, this would have to entail some modern continuation of the centuries-old Medieval sect, for such an origin to compliment the structure's apparent age.

Perhaps, as with many similar mysterious structures--including those upon which the pyramid at Falicon's design was obviously based--the origins of this pyramid will have to settle for obscurity.