There has been a lot of buzz in recent weeks about what are being called "the Roswell slides," a series of Kodachrome images recovered by a group of UFO researchers that include Don Schmitt, Tom Carey and Adam Dew. The images purportedly show an extraterrestrial biological entity, and there are some insinuations (well, several) that the creature is also somehow related to the Roswell Incident of 1947, and that the film stock matches the same period.

Among the recent announcements about this strange affair is that a press conference will be held in May that will feature the images publicly, along with more details about their backstory and possible implications.

Even more recently, however, one of the purported images has now appeared online, as my colleague Nick Redfern had pointed out in an article featured here at MU, where he offered only this on the matter:

"Of course, now, and as of a couple of days ago, you can see one of the images right here. What it shows, I don’t know. Many who have looked at it are underwhelmed. From what I see too, I can’t say I’m particularly excited either."

I certainly don't mean to be unfairly critical of the matter, since I don't have the full back story on it at present, and few of us in the research community will have that story, apart from those directly involved with the purported "find", at least until later this year.

However, if I had to base my expectations on the history of claims very similar to these--and their obvious dubious nature--I would have to agree with Nick that this is not particularly exciting. If anything, I would say that if the photo linked above (in Nick's excerpt) is indeed one of the slides the group will be showcasing in May, then I am already beyond skeptical.

Now let me explain why.

The comments thread on the post Nick links to (which takes us to the UFO Conjecture(s) blog) also includes a link to a German language forum, which includes the original photo from which the "alien" image was taken. That image is a still capture from a trailer that had already been circulating the web, which actually depicts one of the slides in question as it is being examined (that image also presents a better context for the otherwise blurry image of the supposed "alien", and I recommend viewing it here if you haven't seen it already).

Looking at the image, the first thing I thought of (despite the blurriness of the picture) had been that the body of the purported "alien" bears strong resemblance to a child born with hydrocephalus, an abnormal condition where the amount of cerebrospinal fluid flowing to the brain increases, either due to the brain producing too much of it, or perhaps due to a blockage, or an absorption problem with the blood vessels in the region of the body. This often leads to swelling of the brain, and thus, an enlarged cranium with the infants in question (although the condition is not exclusive to infancy).

An undated photograph (described only as "very old") from the archives of the University of Rochester shows a more extreme example of the condition in an infant, as depicted at the Wikipedia entry for Hydrocephalus: 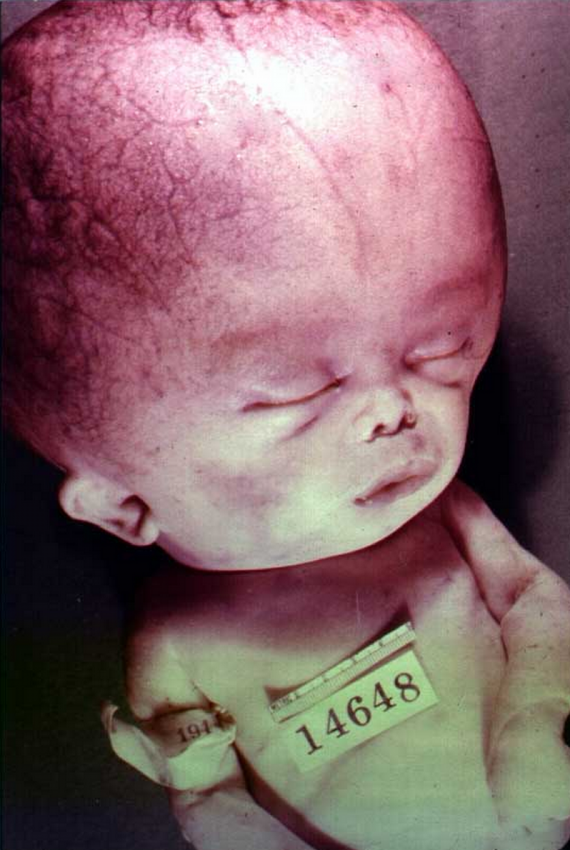 An online image search will offer even more extreme examples of the condition than what we've featured above, but for illustrative purposes this image does give readers an idea of the physical appearance of an infant afflicted with the condition.

One thing we know about the purported "Roswell slides", as written about by researcher Kevin Randle, is that there are still questions about who took the photos, and where... but that, at very least, the names of the individuals who had owned the images are indeed well known. Randle notes:

Tom (Carey) says something that I’m not sure he is going to be able to retreat from and I’m surprised that it was in the video clip. He said, “…We don’t know where the picture was taken. It’s taken indoors [so Ray or whoever, didn’t stumble across the body in the desert]… We don’t know exactly what circumstances the photographer was being a part of to take those pictures.”

Coming back to the article at the UFO Conjecture(s) blog that features the photo, another commenter on the thread below the image notes something that is very interesting, although little background data is presented to support it. Nonetheless, I feel it is relevant to the present controversy, and submit it now for the reader's consideration:

Hi, this is a photograph taken at a local museum in Colombia. The Rays were great travelers. We see the leg and the bottom of the skirt of a woman in the reflection of the glass. The arms of the creature are short, it is probably a child. It is well known that the EBE arms are long and come up to the knees. It is also possible that these two photographs have never been discovered in the trunk in the attic, but adds after. Moreover if we removed the idea that these two photographs were hidden in the lining of the chest, it completely changes the interest of this story. These are just pictures of the trip.

Colombia is cited as the (very general) location here, due to the belief that Bernard and Hilda Ray, whose former home had been the source of the discovery of these slides, had been travelers who might have visited a museum in that country, or perhaps some other country in Latin America, during the 1940s or 50s. Similar discussions about this possible connection have been brought up in commentaries that appear at the Paracast Forums, as well as an update that appeared on Tuesday, again at Kevin Randle's blog. In that post, Randle features comparisons with a small human body provided to him by Gilles Fernandez, which "shows a small body that looks similar to that in the slide."

Honestly, the image we have of the purported "alien" which researchers Schmitt, Carey and others are touting as final "proof" of an extraterrestrial body found at Roswell appears to be anything but. There is no need for harsh criticism here, although in the opinion of this researcher, a few questions that follow philosophical logic are warranted:

1) How can anything appearing solely in a series of photographs, without a physical specimen to match, offer "proof" that would meet the requirements of science? No biologist, chemist, or physicist would look at a photograph--blurry or not--as being representative of good, physical evidence.

2) Much like the argument with regard to the "Atacama Humanoid" featured in Stephen Greer's documentary Sirius, how would anything that was discovered on Earth, let alone something  so obviously resembling mummified human remains, offer "proof" of extraterrestrials? What evidence can conclusively present any connection between the two? At least with "Ata," we had a physical specimen (Note that, as many reading this will already be aware, the Atacama humanoid was proven, despite apparent anomalies, to be human.)

3) When confronted with extraordinary claims of "alien life," logic would further dictate, rather than making un-objective guesses that exert a bias equivalent to wish fulfillment, that prosaic explanations would be offered instead, and, if deemed necessary, either accepted or ruled out before leaping to otherwise illogical presumptions (Example: in likelihood, this image shows a case of hydrocephalus, rather than an alien being for which we can account for no known organism (i.e. an alien) against which we can make such an illogical comparison).

The problems here are indeed many, and in likelihood, from what we're seeing already, the Roswell slides probably aren't going to present that "smoking gun" that many in the UFO community have been long hoping for. 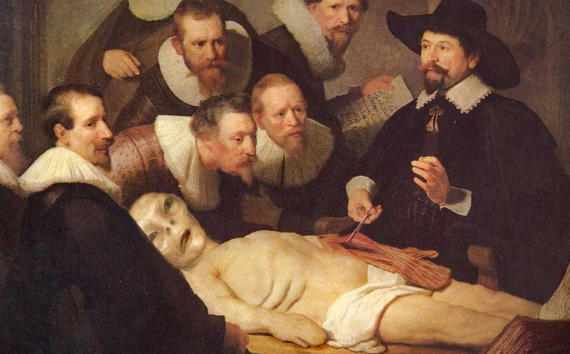