"Good morning. In less than an hour, aircraft from here will join others from around the world. And you will be launching the largest aerial battle in the history of mankind. "Mankind." That word should have new meaning for all of us today. We can't be consumed by our petty differences anymore. We will be united in our common interests. Perhaps it's fate that today is the Fourth of July, and you will once again be fighting for our freedom... Not from tyranny, oppression, or persecution... but from annihilation. We are fighting for our right to live. To exist. And should we win the day, the Fourth of July will no longer be known as an American holiday, but as the day the world declared in one voice: "We will not go quietly into the night!" We will not vanish without a fight! We're going to live on! We're going to survive! Today we celebrate our Independence Day!"

I can still remember how audibly I groaned the first time I watched the corny 4th of July speech delivered by President Whitmore (Bill Pullman) during the climactic scene of Independence Day. I've always had a problem with American jingoism, and here in this über-patriotic story of courage and sacrifice in the midst of an alien invasion --not to mention the longest and most expensive advertisement for Apple computers in all history-- they were shoving it down the rest of the world's throat??

(Mind you, this sci-fi blockbuster was pre-9/11, before they actually did just that...)

But now it seems that instead of the 4th of July, it will be Cinco de Mayo the Mexican holiday which will go down in history as the day in which the course of mankind was changed forever! Or, at least that's what Jaime Maussan and his Roswell 'Dream Team' partners are counting on.

Like the rest of you, I was completely befuddled when I learned that Maussan, undoubtedly the most popular UFOlogist in Mexico --even though he keeps insisting he's just a journalist-- had inserted himself into the controversial saga of the Roswell slides. Because of this, I watched the online press conference streamed through his web channel tercermilenio.tv on February 4th. Why Mexico of all places? Wouldn't it had been more suitable to show this 'smoking gun' evidence in Roswell, or in the National Press Club?

The press conference revealed to me a few clues. According to him, Maussan had been privy to the existence of the slides since 2013, during a field trip over the New Mexico desert with Don Schmidt and Tom Carey. He immediately offered his assistance in trying to release them to the public. The upcoming live event at the National Auditorium may be a sign of the Dream Team's failure to convince an American network in securing the rights for a  TV show since then.

No doubt the UFO topic has always been incredibly popular in my country, with the highest interest registered during the UFO flap that started on July 11, 1991, during a total solar eclipse. On that day, thousands of citizens took a break from their daily chores and looked up to the sky in order not to miss a once-in-a-lifetime celestial event  --the perfect setting for someone or something which might have wanted to catch the public's attention, we might speculate. Though big and bulky, video cameras were beginning to become popular (and affordable) among amateur enthusiasts, and it's because of this that  a few individuals managed to video-film what looked like a  metallic-looking object spinning on its axis; the fact that the videographers were located on different cities --Mexico, Puebla, Querétaro-- indicates there were several objects with the same characteristics, instead of just one. Skeptics insist the videos show the planet Venus. 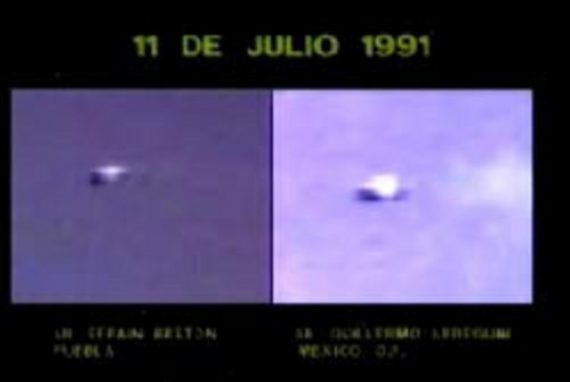 Thus commenced the public's furor for all things UFO, and at the forefront of this was Jaime Maussan. A charismatic TV reporter who began his career as a correspondent for the TV network Televisa, Maussan became involved in the UFO subject when he produced a reportage about alleged contactee Edward 'Billy' Meier for the Mexican version of the show 60 Minutes. I still remember the impact that Meier's 'Pleiadian beamships' caused in me as a young, impressionable child, full of wonder and curiosity about the possibility of life in other planets. By 1991 I was a high-school student, and like many others in my generation we idolized Maussan. He was a regular participant in the late-night TV talk show called "Y Usted qué Opina?" ("and what do you think?") hosted by Nino Canún --who, like Larry King in the States, quickly realized UFOs were a guarantee of big ratings-- where he would present the newest videos sent to him by dozens of amateurs from all over the country, many of whom were part of his group of Skywatchers: Citizens who didn't mind spending many hours on the homes' rooftops hunting for the occasional UFO.

On the night of July 19th, 1991, the transmission of Y Usted qué Opina? --which was always recorded with a live audience and read the messages sent by the public via phone calls-- lasted a marathonic 11 hours and 10 minutes (!) and was only ended (despite the insistence of the studio audience) because it had to leave way for the morning news program. Every time one of the skeptics Canún had invited dared to question Maussan or the videos he presented the audience would boo, and every time Maussan replied back the audience would cheer.

If I had been in that studio I'd probably acted the same way. But I wasn't in the studio, and sadly I wasn't even able to watch the show live on the night it was aired --I was instead caught up in my stupid High-school prom, if you must know...

Many winters have passed since those fateful and exciting years of the early 90's, when we were all convinced by Maussan that contact with ETs was imminent and just around the corner. Since then, those antediluvian camcorders used to film the UFO of '91 have been replaced by better equipment of a more convenient size; while at the same time virtually anyone carrying a smartphone on his or her pocket has arguably the potential to record a UFO video --although ubiquitousness does NOT naturally translates into better evidence; you can test this yourself just by trying to take a video of the full moon with your iPhone or Android.

Not to mention the fact that in this day and age the value of photographic or video evidence has dropped considerably, due to the mass proliferation of photo-retouching, video-editing and CGI software; the UFO videos that used to make our jaws drop  24 years ago wouldn't be worth a thumbs-up click on Youtube nowadays, and those that do look considerably better are in all likelihood a hoax made by some kid seeking to improve his or her FX portfolio.

Yes, things have changed since 1991. Although Maussan continues to be a very popular public figure, his reputation has received more than a few blows, to say the least; videos and cases that he supported in the past are now considered by a great majority of the UFO community to be hoaxes. Take Billy Meier, for example: The last photos and videos released by his organization --the infamous 'wedding cake' saucer-- looked so fake only a handful of devoted individuals still promote them as real. 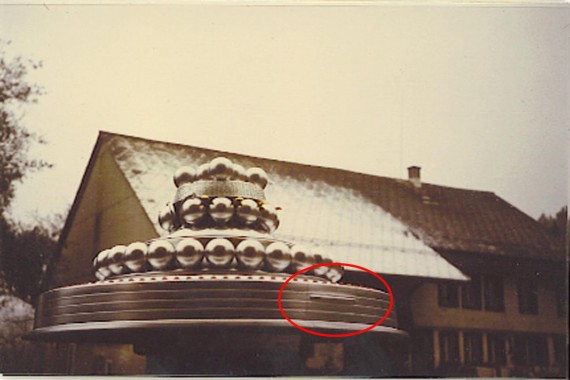 There's also the video of August 6, 1997, which has the dubious merit of probably being the first time CGI was combined with a real background to produce a UFO hoax. 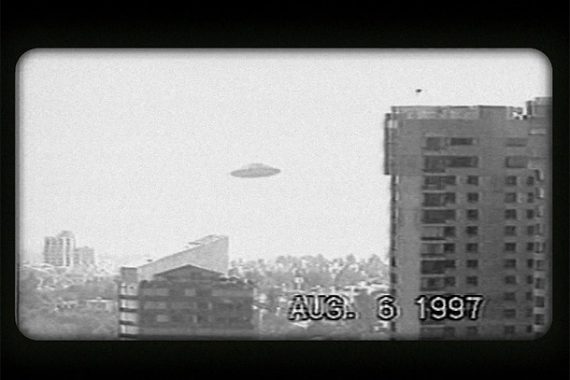 Before Dr. Greer came out with Ata, Maussan was showing his own version of a small alien corpse -- which was deceptively ressemblant of a dessicated monkey... 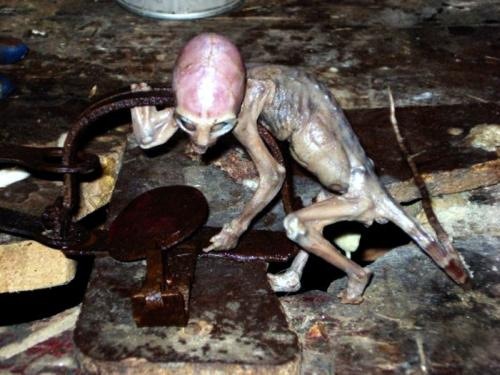 And who can forget the insane tale of Dr. Reed and the 'screaming alien' which he had supposedly "killed" after it had made his dog implode using some kind of weird bracelet --a bracelet Maussan showed on national television on the popular channel 5 program "Otro Rollo" with Adal Ramones.

Mind you, this post is not meant to be a 'Maussan exposé.' Believe it or not, I still think the man has in his possession a collection of very interesting material, sent to him by selfless witnesses who obviously come to him because he's the "UFO guy" in Mexico --even the Mexican Military did the same thing, much to the chagrin of a couple of university scientists, when they decided to release what they thought was a 'UFO flotilla' recorded with an infrared camera by an Air Force plane doing a reconnaissance night flight over the state of Campeche in 2004.

Indeed, his film Luces en el Cielo ("Lights in the Sky") is IMO a very important historical document of the 90's UFO flap in Mexico.

But, this does not exclude the fact that Maussan has continually hampered his credibility over the years by supporting dubious cases and evidence. Will this happen again next May, with all the hyperbole in which the 'Roswell slides' are sure to be released with? Will the slides follow the same fate as the infamous 'alien autopsy' Santilli video, or will our friend Nick Redfern be proved right, and they will instead become the equivalent of the Patterson-Gimlin film --forever dividing the researchers into 2 camps (believers and skeptics) out of a lack of tangible evidence --i.e. an actual body-- that could conclusively prove them either as authentic or a hoax. 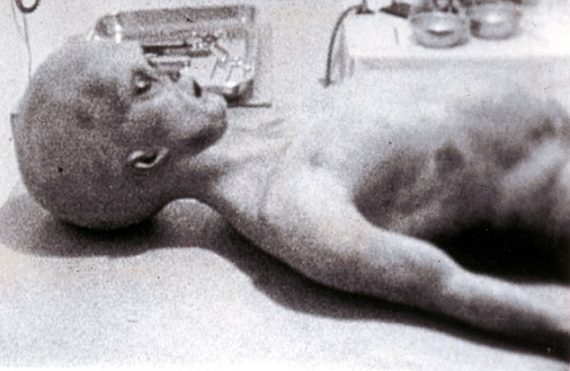 Well, whatever does happen, I will be there on May 5th at the National Auditorium to attest it.

Yes: Against my better judgment, I caved in. What can I say? Not only is this happening right in my own backyard, but I guess I also need to exorcise my High-school prom regret once and for all.