It's one of the oddest stories in UFO history. It's also one of the least known and long forgotten. It's the weird saga of an actor who never quite made the big time, but who produced a less than great movie on UFOs that got him into major problems with none other than the U.S. Air Force. Welcome to the bizarre tale of Mikel Conrad and The Flying Saucer.

Born in Ohio, in 1919, Mikel Conrad was an actor who appeared in approximately two dozen movies between 1947 and the late 1950s, most of which were/are forgettable and downright crummy. That includes 1952's Untamed Women - which, by its title alone, should have made for great, exciting viewing. Unfortunately, it does not, I can assure you. But, it's The Flying Saucer, which hit the cinemas in 1950, that we need to focus on.

Not only was Conrad the star of this priceless piece of UFO hokum, but he also produced it, directed it, and co-wrote it. It tells the story of a man named Mike Trent (played by Conrad) who takes a flight to Alaska to help a U.S. Secret Service agent investigate reports of local UFO activity. Of particular concern, the encounters are apparently of deep interest to pesky Russian agents who are prowling around.

Conrad, as the man behind the movie, personally ensured that the aforementioned agent was played by a hot babe. She was: actress Pat Garrison, who took on the role of the Secret Service's Vee Langley. As Trent and Langley - clearly the Mulder and Scully of their day - investigate what's afoot in the skies of Alaska, they learn something that was definitely not anticipated.

The Russians are not on the scene to uncover the truth about alien visitations to the Earth, after all. Rather, the flying saucers that are being seen, and astounding the populace in the process, are actually the creations of an American scientist who is determined to sell his inventions to the dastardly Reds - for a high price. Of course, Trent and Langley save the day. They prevent the evil commies from getting away with the saucer-shaped technology, and the free world sighs with relief.

There wasn't (and still isn't) anything particularly special about The Flying Saucer. It remains just one of many alien-themed movies that were made in the 1950s. But it does stand out for one, notable reason.

In September 1949, in the build-up to the release of the movie - and in an effort to create interest, and hopefully generate sizeable audiences - Conrad began loudly telling the U.S. media that he had got his hands on no less than 900 feet of genuine UFOs over Alaska. And adding to the intrigue, he informed the Dayton, Ohio Journal Herald that: "The saucer footage is locked in a bank vault. I'm not showing it to anyone yet."

It was actually pure nonsense. There was no footage - at all. However, it wasn't just the media and the public that took note of Conrad's claims to have in his possession film that he described as showing "scenes of the saucer landing, taking off, flying and doing tricks." Behind the scenes, wheels were turning - and turning fast. The Air Force got wind of the story, and of Conrad's claims too, and decided they would very much like to see Conrad's priceless footage.

Also in September 1949, a Lt. Col. James O'Connell, District Commander with the USAF's Office of Special Investigations (OSI), requested that the OSI office in Maywood, California should begin an investigation of Conrad and his claims of possessing priceless saucer footage. He was now a marked man. In no time at all, other offices of OSI were involved, as were staff from the Air Force's UFO program, Project Grudge, and Air Materiel Command. And, just for good measure, the FBI undertook a background check on Conrad. Uh-oh.

OSI documents state that "...after some investigation in an effort to locate Mikel Conrad, it was determined that he was presently an actor-producer-writer in Los Angeles, California." Conrad was quickly contacted by an OSI agent with the last name of Shiley, who made it clear to Conrad that he wanted to see both The Flying Saucer movie, as well as that 900-feet of film Conrad was loudly claiming to possess. The words "deep" and "shit" spring to mind.

On October 26, 1949, Agent Shiley attended a preview of Conrad's movie. No word in the files as to whether he enjoyed it or not. But, far more important to Shiley was the film-footage, supposedly "locked in a bank vault." Confronted by Agent Shiley, a very worried Conrad came clean and admitted that - to quote from the declassified Air Force files - the entire thing was a "figment of his [Conrad's] imagination" and "not a reality."

Seeing that he might, by now, be might be in dire trouble, a groveling Conrad "apologized to Agent Shiley" and added that he was "sorry that he had misled the USAF." Amusingly, even though he was concerned the Air Force might come down on him hard, Conrad asked Shiley, somewhat tactfully, if this could all be kept between the two of them and the Air Force, since he didn't want any adverse publicity affecting the success of his movie!!!

The Air Force agreed, noting in its files, in slightly disapproving fashion, that it had "no interest in his picture." 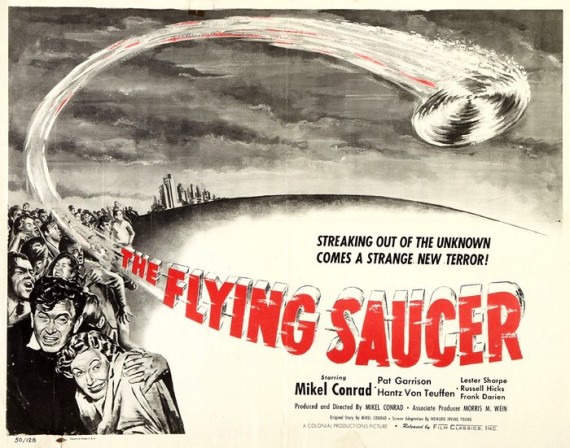 It's notable that at the beginning of the movie a statement appears on-screen. It reads: "We gratefully acknowledge the cooperation of those in authority who made the release of 'The Flying Saucer' film possible at this time." Another apology to officialdom, perhaps? Almost certainly. And, of course, it added a bit of intrigue for the viewers.

The strange saga of aliens over Alaska, The Flying Saucer, and a run-in with the Air Force for promoting a bogus UFO tale, was certainly the highlight of Mikel Conrad's uneventful career. He died in Los Angeles in 1982, after years of living in obscurity, down on his pennies, and with a serious booze addiction. He was sixty-three. He would probably be very pleased to know that sixty-five years after his movie was made, and more than three decades after his death, The Flying Saucer is still being discussed.

The Hunger: A Look at Whitley Strieber’s Vampire Classic