How a Mysterious Flower, Once Thought Extinct, Traveled the World

Seldom do those seeking mysteries look to the realm of floriculture for any evidence of the impossible. But even flowers and their fairness can manage to inspire wonder, particularly when their blooming faces become familiar to travelers in all parts of the world who recognize them, and wonder how they might have come to exist where they are found.

Few stories of flowers and their strange travels excite the mind of the curious quite like the Bardou Job, as it can be seen below in a rendering that first appeared in 1888 in the Journal of Roses: 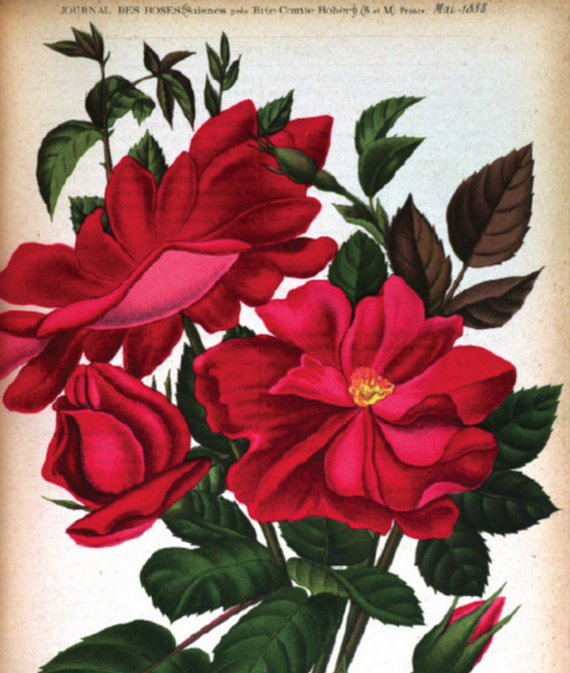 The Bardou Job was first cultivated more than 128 years ago in France, and floral connoisseurs had long held it in high regard, with its particularly dark, wine-red petals. The Bardou, despite its allure, had actually once been though extinct in recent years, until its re-discovery under rather remarkable circumstances.

Of all places, the flower was discovered growing wild on Alcatraz Island, former site of the famous maximum security prison.

As it turns out, there had been a garden kept on the island at the home of James Johnston, the prison warden who, incidentally, had also maintained a particular penchant for roses amidst his broader floriculturist tendencies. The story is that prisoners who were known for good behavior were even allowed to tend his garden as a sort of escape (no pun intended here) from the intellectual and emotional lassitude of confinement.

When the prison was shut down, the rose garden, or what became left of it, grew wild; amazingly, the Bardou Job was found, years later, growing amidst the weeds behind the former home of the Warden.

The San Francisco Gate recounted the flower's rediscovery by Gregg Lowery, a team member with the Rose Heritage Group, nearly three decades after the prison was shut down in 1963:

"There was a single flower, quite tiny, peeping up from an overgrowth of blackberries," he said yesterday, still excited by the memory.

He took a cutting, grew the rose at Vintage Gardens, his Sebastopol nursery, and identified it as the scarce Bardou Job, among the rarest of about 100,000 known rose varieties.

But the Bardou's journey had not ended; with time, news of the discovery amidst rose aficionados made its way to Cardiff, where an historical rose garden had been kept for generations at the site of Saint Fagan's Castle. Interest in obtaining samples was spearheaded by the curator of the Museum of Welsh Life, which eventually led to clippings of the once-extinct rose back to the same English gardens where it had grown prior to the First World War.

Interestingly, this also led to stories appearing in the British tabloids which, in turn, led to further attention brought to how (and where) the long-lost rose variety had been recovered... and a few questions about the legality of the discovery. At the time of the initial rediscovery of Bardou Job roses at Alcatraz, no permit had been issued for the removal of anything from the property. In 2000, a spokeswoman for the site stated that queries into whether the plant still grew there turned up no results, and that if it still existed, authorities would still like for the rose to be brought back to the island.

Sending the rose back to Alcatraz might sound like imprisonment, of sorts. But much like clippings were sent from the original Alcatraz find off to the heritage gardens in Wales, it was equally easy for similar clippings to be sent back to Alcatraz, helping complete this strange little flower's odd trip around the world, and back.