It seems like whenever a hole is opened in Siberia, whether by nature or by man, something unusual is inside. That was the case recently in Siberia's Kuznetsk Basin, Russia, where coal miners found an ancient stone object that appears to be a model of a flying saucer-style UFO.

Located in southwestern Siberia and covering 27,000 miles, Kuznetsk Basin is one of the largest coal mining areas in the world. The location where the strange stone object was found is owned and operated by the Kuzbassrazrezugol mining company. A company crew digging at a depth of 40 meters (131 feet) found two of the stone saucers. One broke as it was being removed but the second came to the surface intact.

The stone saucer is a near-perfect circle with a diameter of 1.2 meters (4 feet) and weighs 440 pounds. Boris Glazkov, the man who found the objects, was mystified.

I have to say it wasn't hard to see as it was really distinctive and large. I've never seen anything like this object, which is obviously man-made out, here in the middle of nowhere before. It is a real mystery. 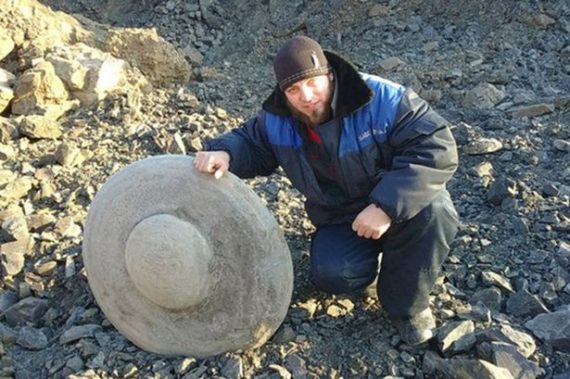 Archeologists have been brought in to analyze the stone UFOs. So far, no explanation has been given for them. The depth at which they were found (40 meters) is deeper that where the mining company normally encounters mammoth fossils (25 meters), suggesting they’re over 10,000 years old.

If they were made by humans, what were they trying to depict? With all the buzz about drones today, the first thought is that it’s a life-size model of an alien drone. More likely, it’s a scaled down model of UFO, since a full-sized stone statue would weigh tons. While there don’t appear to be carvings or writing on the object, it is similar in size and possible age to the Dropa stones – the engraved circular discs found near Tibet and believed by some to be a record of visits by ancient aliens.

A statue of an ancient spaceship? A message from an alien civilization? UFO hood ornament? A Panini press for mammoth sandwiches? Or is this stone UFO something else?