The oceans of the world have long been the alleged haunt of various merfolk, sea serpents, sea monsters, and assorted hulking, mysterious beasts beyond the fringes of our understanding. Since mankind first took to the seas and started our odyssey into this vast, watery domain, sailors have been captivated by such fantastical creatures, and maritime history and folklore is thickly steeped in countless tales of mysterious monsters from the depths. However, sometimes these creatures jump from out of the cloudy realm of legend and fleetingly glimpsed anomalies to come violently crashing into our reality, indeed into our nightmares. Such is the story of the numerous accounts of sea monsters boldly attacking seagoing vessels such as boats, ships, and yes, even submarines. In fact some of the most harrowing sea monster accounts there are involve submarines. It seems that in some cases, mysterious sea creatures do not appreciate sharing the depths with our steel contraptions. How did these encounters between man and beast turn out? Let's take a look. 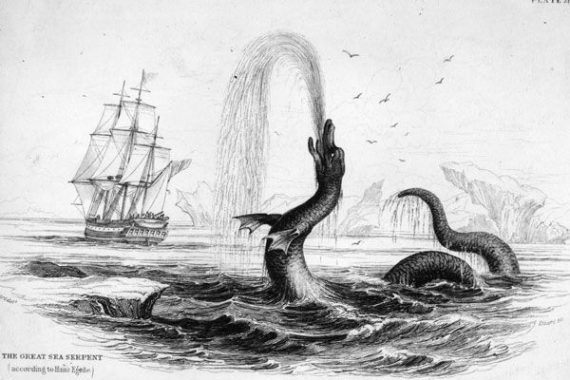 Certainly one of the most well-known accounts of an alleged sea monster attack on a submarine occurred during World War I, when German submarines prowled the waters of the Atlantic looking to make trouble. For one German submarine, the UB-85, on April 30, 1918 it was trouble that found them. The story goes that the submarine was discovered floating on the surface by the British patrol boat Coreopsis. At the time the U-boats, as the German submarines were called, were a fairly novel and highly feared weapon of war, known for being invisible, deadly killers of the high seas, so it was quite a fortunate turn of events for the British to come across one that was basically a sitting duck out in plain view. They immediately fired upon it and the submarine began sinking without any attempt to retaliate. Things became even weirder when the British vessel approached and the submarine crew quickly surrendered without any resistance. The crew of the British ship was mystified. The only time most crews saw a U-boat coming was when a torpedo was snaking through the sea towards them, and to have a whole submarine just sit and wait to be sunk and its crew apprehended without incident was mind bogglingly strange.

It wasn’t until the Germans were brought aboard and the U-boat captain, a Captain Gunther Krech, was questioned that the reason became both clearer and more bizarre. Krech allegedly reported that the submarine had surfaced during the night for the purpose of recharging its batteries, during which there had been a violent surge of frothing water off the starboard bow. When Kech and some crew members had gone to investigate, a creature the captain described as a “strange beast” had suddenly erupted forth from the cold, dark water and begun clambering up the side of the ship, which had caused the whole submarine to start listing to the side. The beast was described as being enormous, with a small head with large eyes deeply set in a horned skull and a large mouth with sharp teeth that glinted in the moonlight. This strange monster was then claimed to have reached the forward mount gun and to have begun ferociously attacking it, chomping down on the weapon with its formidable jaws and thrashing back and forth.

Fearing that the submarine would continue to tilt under the creature’s weight until the open hatch hit the sea and sank the sub, all available crewmen had opened fire on the mysterious attacker, yet the thing had refused to let go of the gun mount. It apparently had taken a sustained, intense volley of gunfire to finally make the monster relinquish its iron grip, after which it disappeared into the black sea, its ultimate fate unknown. Final score: Submarine-1, Sea Monster-0.

Inspection of the submarine in the aftermath of the sudden, brutal attack showed that in addition to the gun being mauled, scratched and twisted, there had also been enough damage to the forward hull plates to prevent the submarine from submerging again. This was why they had been helplessly sitting out on the surface for their enemies to find them. The crew, weary and terrified by their encounter, had had no fight left in them when the British vessel had come for them, and had been almost grateful to have been relieved of the ordeal.

It is a frightening and dramatic account to be sure, but interestingly the official report logged by the British concerning UB-85’s capture makes no mention of such a creature, reading simply “UB-85 Krech, Kplt Gunther April 30 off Belfast Lough Gunfire Sunk by the drifter COREOPSIS. Crew taken off before boat sank.” There have been several theories offered as to why this might be the case. It has been suggested that the British navy may have been attempting to cover up the real circumstances surrounding the incident. Perhaps more plausible is the idea that the British simply did not believe the ramblings of the distressed German U-boat captain or that the report of the sea monster was completely fabricated after the fact. The story has very little hard evidence to back it up and indeed could very possibly be heresy or merely a scary war story or tall tale embellished over the years ro become maritime legend more than anything else. 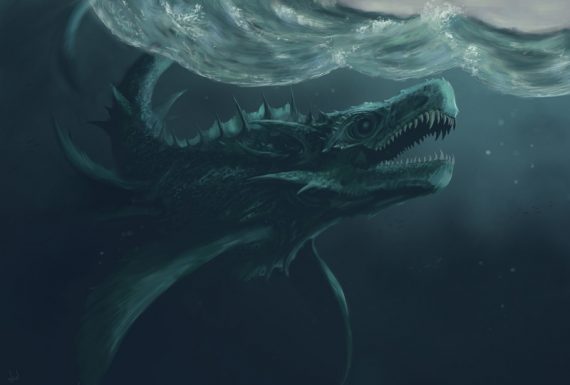 The veracity of the UB-85 encounter may be in question, but it is amazingly not the only meeting of sea monster and submarine to come from World War I. The cryptozoologist Bernard Heuvelmans made mention in his book In the Wake of the Sea Serpents of yet another such violent altercation involving a German submarine, this time involving the U-boat U-28 Schmidt. The report apparently comes from a former German U-boat captain who recounted his terrifying ordeal in 1933.

According to the former U-Boat captain, Commander Freiherr George G von Forstner’s testimony, on July 30, 1915, the U-28 Schmidt was prowling the waters off of a place called Fastnet Rock, 60 nautical miles south off the coast of Ireland, when it came across the British steamer Iberian, which was carrying a valuable cargo of mostly trucks and jeeps. Upon seeing such a choice target, the U-28 Schmidt immediately engaged, launching a torpedo which spectacularly blew an immense hole in the vessel, causing it to sink so fast that it was reported that its bow sprang up vertically into the air as it went down. Within moments, the Iberian had sunk beneath the rough seas of the North Atlantic, taking all of its 61 crew members to a watery grave.

Around 25 seconds after sinking, there was an immense explosion underwater, thought to have been caused by some kind of explosive device onboard or perhaps an exploding boiler. Whatever the cause, the enormous detonation sent a huge plume of water into the air, as well as an eruption of debris from the ship, some of which pelted and damaged the U-28 Schmidt badly. Amongst all of the flying water and wreckage, the explosion threw up something else from the depths; of all things a giant, seagoing reptile of some sort. The explosion was so violent that the alleged sea monster was reportedly hurled completely out of the water 80 feet into the air, after which it plummeted back into the sea to thrash and writhe about in the wreckage as the horrified crew looked on before sinking into the depths, presumably dead. The monster was described as a being an “aquatic crocodile,” around 60 feet long with a head that tapered to a point, a long, pointed tail, and four legs with webbed feet.

What was this weird sea creature and perhaps more importantly, what was it doing skulking about the area in the middle of a noisy naval engagement and how did it manage to be in just the right place, directly over the sunken steamer when it exploded so ferociously? Was this a genuine freak occurrence involving an undocumented sea monster or is this again just tall tales and exaggeration woven into sea lore? There is little evidence to go on with this case other than the account given by the Captain himself as well as some additional reports given in later years by other crewman who were present, and none of these witnesses are still alive today. With so little solid documentation, no surviving witnesses, and no further information to go on, it is quite likely we will never know for sure.

What do we make of accounts such as these? Whatever one's opinion on the matter is, the sea is certainly a wellspring of the unknown, giving birth to myth, legends, and inscrutable, sometimes violent mysteries. Perhaps one day, when we have managed to gain a further understanding of the ocean's wide array of enigmas and strange creatures, we may finally find some answer that seems to fit. Until then, we can only look out at the vast blue expanses of our world's oceans and wonder.