The Hunger: A Look at Whitley Strieber’s Vampire Classic

Prior to becoming known as an “abductee” with the publication of Communion in 1987, Whitley Strieber wrote two bestselling horror novels: The Wolfen and The Hunger. Both were adapted into films. The Hunger, published in 1981, deserves to go down in literary history as one of the greatest vampire novels of the late-20th century, easily surpassing in quality much of Strieber’s more contemporary fiction.

The main protagonist of the story is Miriam Blaylock, an ancient and immortal vampire seductress who thrives on the warmth and intimacy that only a human lover can provide. It is only through companionship with a human that she’s able to gain some measure of relief from the terrible loneliness that plagues her.

Miriam, whose origins date back to ancient Egypt and who claims descent from the Lamia, has the ability to transform any human she chooses into a vampire much like herself, by transferring to them a small quantity of her blood. Humans transformed in this manner acquire, like Miriam, an appetite for human blood, in addition to highly acute senses. They become not vampires per se, but vampire-human hybrids. There’s one problem, though: they always die eventually. 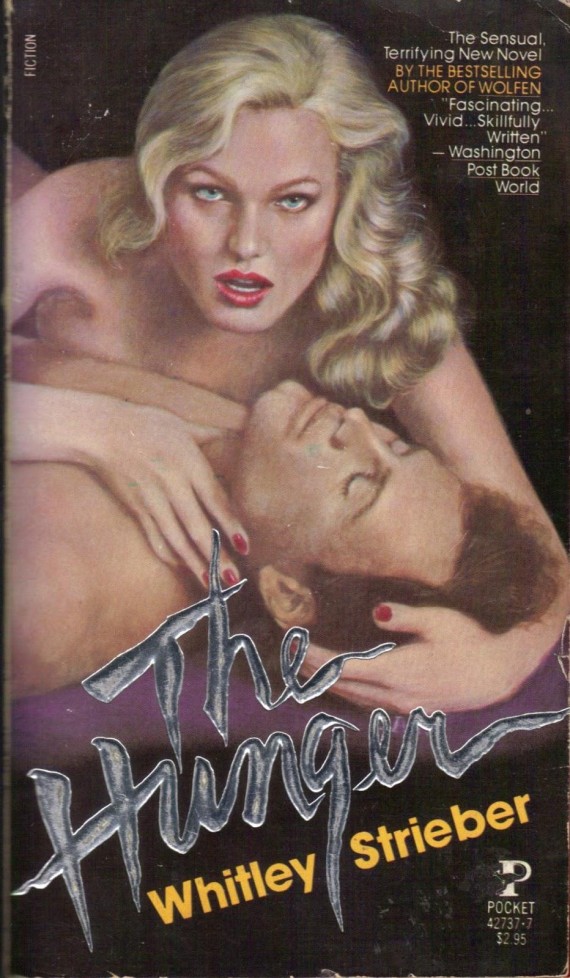 John Blaylock, Miriam’s latest companion and lover, was transformed by Miriam into a vampire approximately 200 years ago. Today they reside together in a comfortable home in New York City, hunting down and feeding on humans when their appetites demand it.

Having been tricked by Miriam into thinking that like her he cannot grow old or die, John is shocked when, one morning, he examines his face in the mirror and notices signs of aging. From that point on, he begins to transform at a rapid rate from a handsome individual of youthful appearance into a hideous geriatric with an even greater appetite for blood than before. Death, he realizes, is finally catching up with him, and very quickly at that.

In the hope of preventing her next human companion from experiencing the same fate as John, Miriam establishes contact with a scientist named Dr. Sarah Roberts, whose groundbreaking research using rhesus monkeys promises to offer a solution to halting the aging process in humans and thus granting immortality. Applying her cunning and seductive ways, Miriam begins to manipulate Sarah, at one point attempting to turn her into a vampire…

Of the many vampire novels I’ve read over the years, both dated and contemporary, The Hunger ranks as one of my favorites. I like the fact that the Strieber’s vampires are presented not as supernatural beings with magical powers but as a highly intelligent humanoid species coexisting alongside our own, albeit in secret.

Although ostensibly about vampires, The Hunger is at its core an intelligent and perceptive commentary on the way people exploit each other in relationships. We are, Strieber seems to be saying, all vampires on some level, especially as concerns the way we treat, and are treated by, those with whom we’re romantically involved.

Even if you’ve seen the 1983 film version of The Hunger and, like me, found it extremely underwhelming, there’s no reason you won’t enjoy Strieber’s novel. After all, the film—which was directed by the late Tony Scott and stars Catherine Deneuve as Miriam Blaylock and David Bowie as John Blaylock—is only a very loose adaptation and fails to do justice to its literary source.