What do Tibetan mummies, cancer research and a poor woman from the first half of the 20th century have in common?

No, that’s not the opening line to a really bad joke.  It’s a serious question.  Though giving you the answer is going to take some time.  The one thing all three of those things has in common, is immortality.  In a round-a-bout way.

I suppose we should start with Henrietta Lacks.  Mrs. Lacks was a pretty young woman who had the serious misfortune of being born in Virginia in the 1920’s; she was, as is politically correct, African American.  As may be no surprise, she led a tough life.  Poverty, racism, and the poor state of affairs in that era had dire consequences for a lot of people, and that included Mrs. Lacks.  You see, she died of cervical cancer in 1950, survived by her husband and five children…and, as it turns out, the world’s first immortal human skin cells.

Let’s not get ahead of ourselves though.

During the birth of the Lacks’ fifth and final child, complications developed.  Profuse bleeding threatened the young mother’s life and though doctors initially assumed syphilis to be the cause, this was quickly ruled out and she was sent to Johns Hopkins Hospital in Baltimore for further examination.  Ultimately it was found that she had cervical cancer, or malignant epidermoid carcinoma of the cervix.  She was treated with radium tube inserts and X-rays, but unfortunately she succumbed to kidney failure within months.

Henrietta Lacks story is a tragic one, but also an all too common one; except for one small fact that led to one of the most important medical discoveries of the century.

During her radium treatments, doctors took tissue samples from her cervix.  Today you might think that to be a routine step in a case like this, but it wasn’t exactly common practice back then.  One thing that unfortunately is common, then as now, is for doctors to do these kinds of things to women without first getting the woman’s permission.  For Henrietta and her family, this turned out to be more of a problem than you might think.

Those stolen samples were given to biologist Dr. George Otto Gey, presumably to be studied in the guise of cancer research.  But Dr. Gey quickly found there was something quite remarkable about Henrietta Lacks, or more specifically, her epithelial cervical cells: they’re immortal.

It turned out that Henrietta’s DNA had mutated in a very special way, a way that allowed her cells to replicate indefinitely.  If you’re familiar with cancer in a biological way, you understand that cancer is, essentially, what results from cells that don’t die when they’re supposed to.  Cancerous cells replicate out of control and begin undermining the function of whatever organ they infect.  However, once those cells have been removed from their host, they quickly lose their zest for life.  Such is the way of cells, cancerous or not.

But in the case of Henrietta’s cancer cells, they continued to proliferate – that is, to reproduce – even after they were removed from her body.  It’s important to understand just what that means.  When doctors conduct biomedical research on a cellular level, they obviously need cells to work on.  Lot of cells, and lots of petri dishes.  It has typically been quite difficult to cultivate and maintain enough cells to be useful in medication and genomic research whilst also trying to keep them alive long enough to bear results.  That all changed once Henrietta’s cells came into the picture.  Since her cells replicate on their own, and continue to replicate on their own without any outside help, they can be used reliably in those kinds of research trials.  They can be replicated and stored and used over, and over, and over…indefinitely.  In fact, Henrietta Lacks’ cells were the product of the first ever cell factory.  They are what’s now known as an immortalized cell line, and Mrs. Lacks’ – which are officially called HeLa cells – were the first ever found.

The discovery of immortalized cell lines was an incredible breakthrough.  It led to the desperately needed polio vaccine and to new medication delivery methods.  It helped scientists to unlock DNA and to map genomes, and really, these cells have helped to improve every corner of medical science.  Immortalized cell lines have served as the foundation of many new branches of science, both biomedically and technologically.  And since Dr. Gey’s discovery, other kinds of immortalized cell lines have been discovered, an important one being the bewilderingly controversial stem cells.  Henrietta’s legacy is a true gift to mankind, even though she, nor her family ever saw a single bit of recognition or compensation for the mountains of money that have been made on the back of her unwilling sacrifice.

So what does that have to do with a Tibetan mummy?  Great question!

Last week news outlets everywhere were exclaiming that a mummified Tibetan monk that had been found buried in Mongolia might actually be ALIVE! 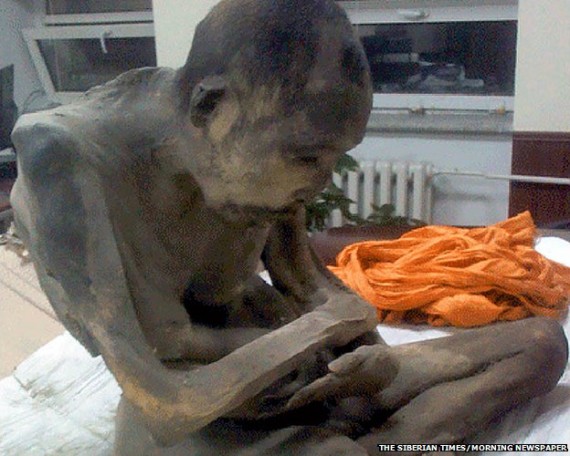 The remains were of a monk who, apparently, died while meditating and seated in the lotus position some 200 years ago.  Far be it for me to tell you what to believe, but the claim that this monk is still alive after having been functionally dead and buried for 200 years is not a scientific one – nor, do I think, is it a reasonable one.  It is his fellow (living) monks who have put this forward, and well, you can decide for yourself what the truth is.

Here’s where I see a connection to Henrietta Lacks and her immortal cells though.

This mummified monk is extremely well preserved, which is something we’ve seen with other mummified remains.  On occasion we’ll find remains that are so well preserved that the claim of immortality seems plausible.  I have only a single question though, what if some variation of the mutation that allowed Henrietta’s cells to proliferate forever is at work in the living mummy of Mongolia?  What if he’s dead, but his cells haven’t yet gotten the message?

Dinosaurs Ate Magic Fungus But Did They Get High?